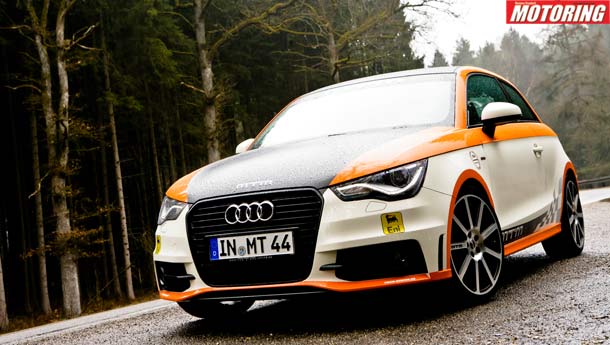 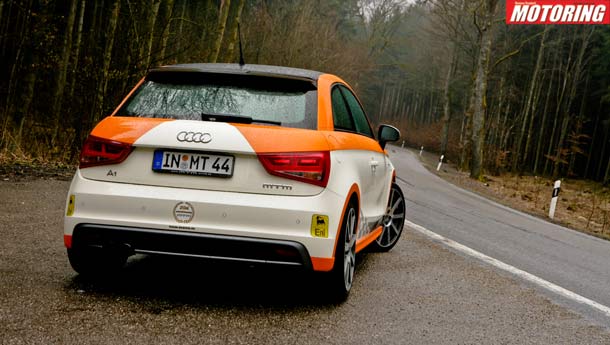 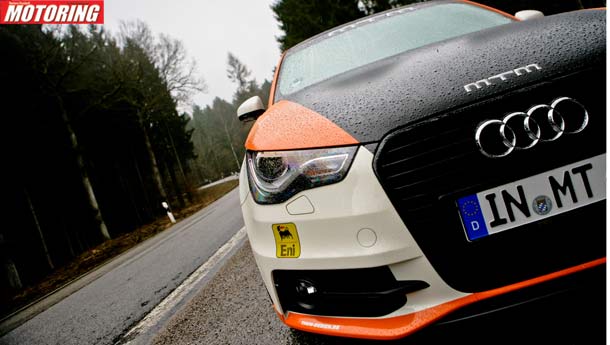 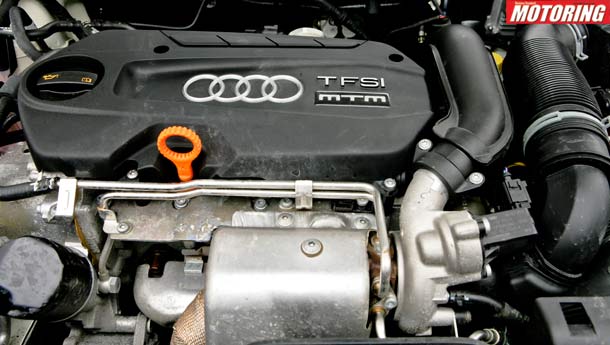 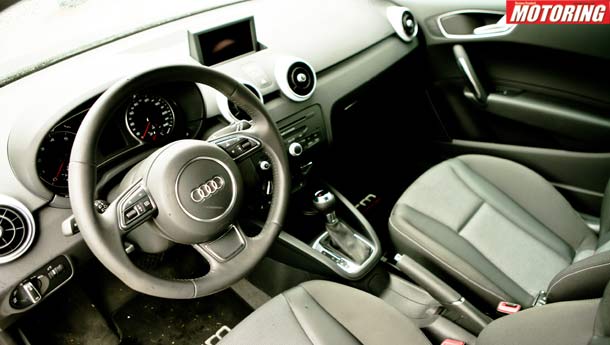 It’s wet, the country road we’ve chosen is winding and tight and the front slides wide as the traction control light flashes endlessly on the dash. This is a different kind of drive, a different kind of fun, but German tuner MTM’s interpretation of the new Audi A1 can still put a smile on anyone’s face.

Audi’s addition to the supermini ranks was odd to start with. Underneath the marketing guff that claims this is ‘concentrated Vorsprung durch technik’, it’s actually a Volkswagen Polo with a designer jacket and underpants. It’s a relatively standard small car, with a veneer of big car luxury and a stratospheric price tag. In today’s consumer society, this style over substance exercise was always going to work.

A small car is no longer a clear statement that you can’t afford a big one, it’s a lifestyle choice and manufacturers have moved to embrace it. Audi isn’t the only one to play this game, of course. The new Mini has got steadily more expensive, then there is the Alfa Romeo MiTo and, at the ridiculous end of the scale, the Toyota-based Aston Martin Cygnet. And as anything with an Audi badge seems to fly off the shelves right now, perhaps it’s no surprise that the svelte A1 has become a success. Audi rarely misses a trick and its A1, which will head up a family of lesser cars from VW, Skoda and SEAT, is the four-ringed star’s assault on the sector.

It’s certainly cute enough; if you can look past the racing livery that MTM has implemented on this car then there’s a stylish car underneath. Sharper at the front than the BMW or Fiat alternatives, it’s an understated, grown-up small car that isn’t quite as cutesy as the opposition. That fits in perfectly with the premium price tag, as does the interior that marries Audi’s dials and switches with the VW Polo’s bullet-proof fascia.

The knurled metal heater controls are simply perfect and Audi has miniaturised the A8 limo’s second-generation multimedia interface with wit and charm. Then there’s the DSG gearbox fitted to this car, which adds yet another sizeable chunk of cash to the investment and sends the A1 heading towards Golf GTi territory price-wise. In fact it’s too much of a big car convenience to fit into a small car price tag.

It’s not perfect, though. The painted vents erupt from hard sheet plastic and while the interior is stylish, this is no A4, or even A3. MTM will slowly work their magic on the car with aluminium accent touches like pedals and carbon-fibre inserts in the console. These should go a long way in hiding the rough edges and giving the car the premium feel the price tag should dictate. And if they have that kind of money to spend on a dolled-up Polo, then chances are the customers have more to spend on a little window dressing, which is good news for tuners like MTM’s Roland Mayer.

The base car had just 122 bhp to start with, so even though the 1.4-litre turbo has won praise for its buzzy response, it could obviously go faster. MTM went to work on its electronics to produce an epic 30 bhp boost. In normal terms that’s nothing, but here it’s a 25 per cent power boost, which is huge.

It took two additional Cantronic ECU units to boost the power to 152 bhp and then override Audi’s speed limiter. But the figures are one thing, the feeling is quite another. As I fire up the plucky little Audi, it growls like something altogether more serious. MTM has fitted a sports exhaust, of course, but the sound is other worldly; it crackles and fizzes as I turn out of the factory onto a sodden and stormy street. It even seems to pop on the overrun as I flick down the DSG box and enthusiastically attack the first bend. In fact if you heard this car from a distance, you’d be expecting something far more serious to appear.

As for the drive, it’s fun. Audi already opted for a sporting set-up and firm ride and MTM has dropped the car further on to huge 18” Bimoto wheels that almost look too big for the car now, to create a whirling dervish of a car that dances on the road surface. It also bites into the bend much more keenly than the original car, which for some reason fell short of VW’s Polo when it came to pure driving thrills.

The larger wheels and Michelin Pilot Sport tyres help to create a much more aggressive feel at the wheel and by the end of our drive I’m throwing it into the bends on full throttle to feel the little car jerk into the corner and then float gently past the apex with the throttle nailed.

It still isn’t fast – the base car hits 100 kph in 8.9 seconds and MTM’s revisions mean it will now do it in 8.5. The top speed, meanwhile, won’t go much beyond 220 kph even with the additions, and there are much faster and more complete machines for the Euro 32,000 (Rs 21 lakh approx) this car costs.

This will be a specialist car for very special people, but this is about as much power as you’d want in the A1 without a serious rejig of the suspension, brakes and more. But within the city walls that really doesn’t matter. This car is a lifestyle choice, it is pretty, it is fun and it is entertaining. Apparently good things really do come in small packages, after all.