Motorcycles that will make you drool

Apart from a few motorcycles in the lighter segment, Honda might launch its CBR 500 R model in India by mid-2016. The bike will be powered by a 471 cc, parallel twin cylinder, liquid cooled engine that can produce approximately 47 bhp and 43 Nm of toque. The engine of the CBR 500 R has been mated to a 6-speed constant mesh transmission and comes with the promise of all-round performance. The bike has an impressive profile and will feature twin headlamps in the front. Braking on this bike will be facilitated by two single discs for the front and rear. However, an anti-lock braking system (ABS) setup has not been confirmed for this bike. The CBR 500 R can go from 0-100 kmph in a mere 5.7 seconds and can achieve a top speed of 180 kmph. UM Motorcycles India - the US-based motorcycle brand that signed a strategic joint venture with Lohia Auto to create a 50-50 partnership - was supposed to have introduced its bikes in India in 2015. It is now expected to market a full new range of motorcycles designed especially for the Indian markets. The company will introduce a couple of bikes in the cruiser segment. These include the Renegade Commando and Renegade Sport. The TVS-BMW G 310 R, which is expected to be launched in early 2016, is a pure 'Make in India' initiative by TVS. German motorcycle major BMW Motorrad revealed its TVS-collaborated 310 cc motorcycle at the EICMA 2015 show in Milan. The motorcycle will compete directly with the recently introduced 300 cc Mojo from Mahindra & Mahindra and even take on the likes of Kawasaki Ninja 300, Benelli TNT 300, KTM Duke 200 and 390 and a few others.

Developed in Munich by BMW Motorrad, the motorcycle has been produced in Bengaluru in partnership with TVS.

The centrepiece of the new BMW G 310 R is the newly developed 313 cc liquid-cooled single-cylinder engine with four valves and two overhead camshafts together with electronic fuel injection. The capacity of 313 cc results from a bore of 80 mm and a stroke of 62.1 mm.

The striking feature of the engine is its backward-tilted cylinder in open-deck design with the cylinder head turned by 180 degrees, making it possible to position the intake tract at the front, viewed in the direction of travel.

The bike is extremely compact with a broad spectrum of ride responsiveness, ranging from comfortable to sporty and dynamic.

In terms of suspension, the new G 310 R has a torsionally stiff, highly robust tubular steel frame in grid structure with bolt-on rear frame. The front wheel suspension is taken care of by a solid upside-down fork, while at the rear there is an aluminium swingarm in conjunction with a spring strut that is mounted on it directly.

The new G 310 R is fitted with an ABS. The instrument cluster has a large liquid crystal display that offers excellent clarity and a wide range of information. The motorcycle stands on tyres that are 110/70 R 17 at front and 150/60 R 17 at rear. 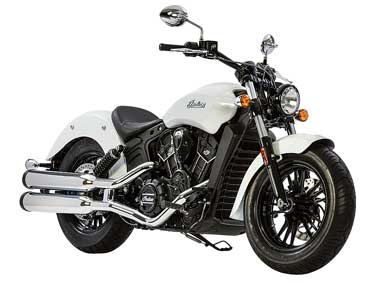 Indian Motorcycle, part of the US-based Polaris Group, revealed the latest addition in its portfolio, the Scout Sixty, at Eicma 2015. The new Scout Sixty is inspired from the standard Scout and is the most economical product in the company's lineup. This vehicle is expected to land on Indian shores soon.

The new Indian Scout Sixty is powered by a 999cc, liquid-cooled, four-valve V-Twin engine that produces 78 hp at 7,300 rpm and a peak torque of 89 Nm at 5,600 rpm. (The existing Scout sold in India is powered by a 1130cc engine). The engine is mated with a 5-speed gearbox. The suspension system of the bike comes from the standard Scout that has 120 mm non-adjustable forks at the front and 76 mm adjustable shocks at the rear. The Scout Sixty gets cast aluminium frame and has 298 mm discs at both the ends with a single two-piston caliper at the front and one piston-caliper at the rear. The kerb weight of the bike is 295 kg. The Vulcan S made its international debut last year and may find its way to Indian shores by the first half of 2016. The bike is powered by a 649 cc, parallel twin-cylinder, liquid cooled engine that is also found on the Ninja 650. The engine produces around 55 bhp and will be a direct competitor to the Harley Street 750 and Triumph's Bonneville. The bike may come to India via the complete knock-down route and may also get Kawasaki's Ergo-Fit comfort and convenience customisation options. This Italian motorcycle maker is expected to launch the Panigale 959 and the XDiavel in India.

One can expect to see the Panigale 959 on Indian roads by mid-2016. This fully-faired beauty will be powered by a 955 cc, L-twin cylinder, liquid-cooled engine capable of producing 157 bhp and 107 Nm of torque. The bike boasts of a monochrome frame, ABS (standard), two floating discs in the front and a single disc brake for the rear and fully adjustable front and rear suspension. The XDiavel was voted as the best looking bike at the EICMA 2015 show. The bike, expected to be seen on Indian roads around the end of 2016, will feature a 1262 cc, L-twin, liquid-cooled engine that produces 156 bhp and is mated to 6-speed gearbox.

The XDiavel falls in the cruiser category of motorcycles and has a very radical style quotient. The bike has been built around a tubular steel trellis frame and will boast of features like Ducati Power Launch, cornering ABS, multiple riding modes, cruise control, handsfree communication and powerful LEDs, apart from a host of other handy features. 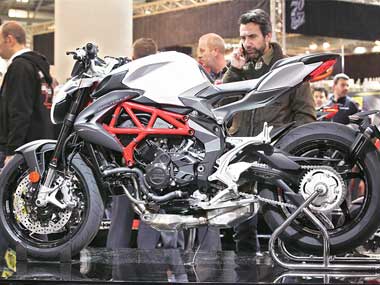 This Italian motorcycle brand will soon come to India through its partner, the Kinetic group of Pune. The company recently unveiled its new MV Agusta logo globally, which has been restyled and bears the tagline "Passion". The symbol made its debut on the Brutale 800, a completely original project that aims, 15 years after its first appearance, to create the "most beautiful Brutale ever".

Many components are made from light alloys such as the headlight support and the ingenious saddle frame, enhancing the overall design of the Brutale 800. This motorcycle is expected in India next year along with the Dragster RR. 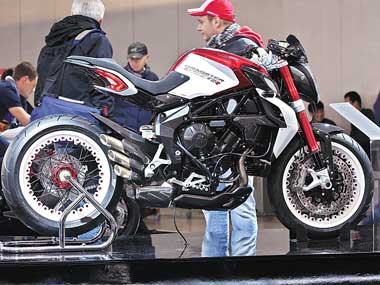 The engine is also new. It is Euro 4 compliant with a power output of 116 hp at 11,500 rpm, while the torque has risen by 25 per cent and now offers 8.46 Kgm at 7,600 rpm. One of its unique features is a counter-rotating crankshaft and the new Brutale 800 is the only bike in its category with electronic EAS 2.0 up and down gear shift. The slipper clutch is now hydraulically operated, while engine management is taken care of by the MVICS system.
P Tharyan is Editor and Joshua David Luther is Senior Automotive Correspondent, Motown India (www.motownindia.com)