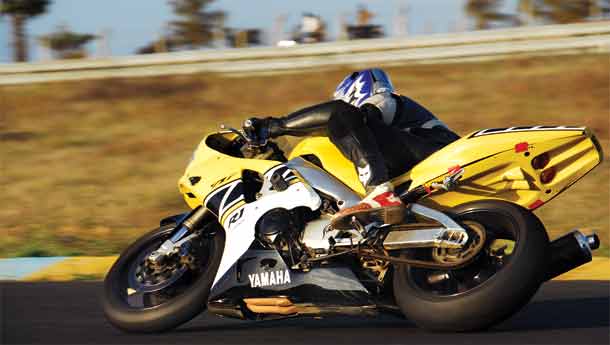 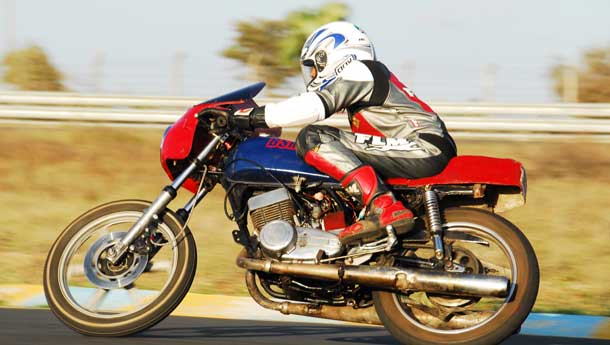 Remember the story of Layla, my project RD 350? For those of you who don’t, here’s a refresher. I started rebuilding a junked RD350 that I bought cheap in order to take it to a track day in Coimbatore. Of course, the project missed the Feb ‘06 track day deadline, so I worked round the clock to ready it for the September 30th event.

September 29
So there I was in Coimbatore, a day before the event, to get the bike out of the railway station and prepare it for the track. But that didn’t quite happen, as Lalu and his bandwagon of babus had other plans for my motorcycle. They decided to get take it on a scenic trip to Cape Comorin before it dropping it off at Coimbatore. No, I didn’t opt for my cafe racer to tour the South on a train – the skinny little parcel workers couldn’t open the jammed doors to the parcel rake. The good news was that I would get my motorcycle back. The bad news was that it would be here before Saturday evening. And I thought the early bird catches the worm. So I twiddled my thumbs and dug in to some spicy Chettinad chicken while waiting for the rest of the guys and their machines to land up.

September 30
It’s 4 am and frantic knocks on the door of my hotel room startle me. There’s a distinct buzz in the corridor, I’ve heard this kind of sound before. The RD Dreams guys have just arrived.  ‘To the track at 7’ says Anand as I open the door. Anand Dharmaraj is the guy who’s responsible for starting these motorcycle track days in the country. After miles of street riding in the US, he took to the track there and had a ball. So when he came back to India, it was only a matter of time before he got in touch with the right guys to do what I’d say is the ‘bloody right thing’. The trend has caught on since and every other club or organisation now holds track day events.

A few hours later, with leathers and jerry cans in hand, (I had to make do with my camera) we drove out to the track. Their bikes had arrived at the track the previous night. Everything just seemed right as we entered the place. A gentle breeze wafted across the track as the sun rose quickly from behind the windmills at the far end of the track. A walk down pit lane and I saw a variety of specimens in the form of RX 100s, RD350s, a Kawasaki ZX6, a couple of R1s, our friends Vivek’s GSX R 1000 K6 (remember him from the Minimoto and K6 shoot?) and an insanely fast, okay an absurdly 28 bhp-fast, RD Dreams-built Yamaha RXG.

A cloud of blue smoke descended on the track as the pit lane was officially opened. The wail of ring-dings from the two strokes and the sweet smell of Motul was a wake up call to every little hair on my hand. And then there were the superbikes that roared to life. It seemed like the stories of Motorcycle GP from the 70’s that I read about and longed to experience. I felt the rush and I didn’t even have a motorcycle. Anand held a rider’s brief, explaining and categorising riders into the beginners, advanced and superbikes class while explaining the rules of the circuit. The first session was a familiarity session, after which there were timed sessions of 30 minutes each that were managed by Anand’s better half Soumya, who was the pit boss, clerk of the course, official time keeper and even quadrupled as the event mascot for the weekend. So I headed out on to the track to catch the thrills and spills from behind the lens.   After an hour or two of taking pics, I just couldn’t resist the wrench and got back to the pit lane to help anybody who was (or wasn’t) in need of some wrenching. Senthil and George, fondly known in the club as the Thompson Twins, had a screamer of a motorcycle that was plagued with problems throughout the weekend, while Ron Chinoy was busy dialling in his RD350, aptly called Monster. I feasted on Anand’s tool chest and helped with whatever little I could – which in retrospection was a very good move, as I met a bunch of interesting people with interesting stories to tell, including a super enthu guy on a bone stock sparkling red RD350. Boy, this guy used every little opportunity to get onto the track and stay here.

It was nearing the end of the day when my cell phone rang. It was good news from the railways – my motorcycle had arrived and was ready to be picked up. I quickly left the track, sacrificing what I heard later was an awesome barbeque session thanks to Pradeep and RD Dreams’ resident BBQ man and wise guy Arun. I raced back to the station and wheeled Layla back to the hotel basement to fit the bits and bobs that I had dismantled for the train ride. The boys arrived a bit later and chipped in (special thanks to Pradeep, Arun and Anand). We figured that my master cylinder was shot and could only be fixed in the morning.

October 1st
Back at the racetrack, the boys were out on track, but after a swapped master cylinder there was more trouble for me. The race bearings refused to stay tightened and the main stand refused to come off. Hammers, bigger hammers, muscles, bigger muscles but the thing wouldn’t budge. Finally, the gas welder nearby came to the rescue. My RD was determined to beat the Thompson twin’s RX for the ‘No Show’ prize at the track day – fortunately, the twins made sure that I didn’t win.

It was just an hour before lunch, clad in leathers, trembling with excitement, that Layla and I made our debut at the Kari Speedway. What an awesome experience! I managed to clock a fair number of laps beside other motorcycles, including the big boys on their superbikes. The experience was just too surreal to put into words. I’ve now got my thinking sorted and my priorities set. This place is my Holy Land, my Mecca and I’m going back soon.