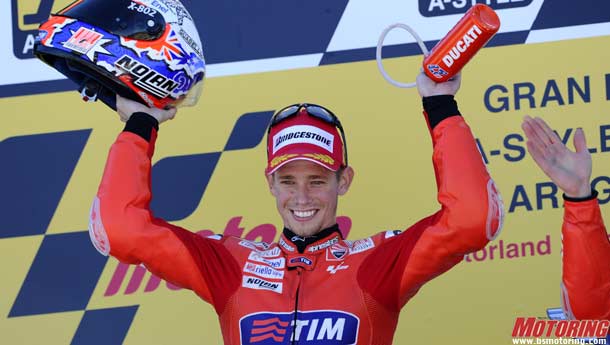 Casey Stoner took a fine win for Ducati at the Grand Prix of Aragon in Spain. It was the Australian's first victory of the 2010 season. Stoner managed to get an early lead in the race, fending off Fiat-Yamaha's Jorge Lorenzo and Repsol Honda's Dani Pedrosa. He managed to keep his lead over Pedrosa by around one second a lap through the race, finally winning with a five-second margin.

It was Stoner's 21st MotoGP victory. All of Stoner's wins have been with the Ducati team, who he leaves at the end of the 2010 season, to make way for Valentino Rossi.


Stoner said that the win at Aragon was a big relief and that he was sorry that it took so long to win this season. He also admitted that Ducati had been struggling to keep up with Honda and Yamaha this year, but a complete change to the bike set up this race made a huge difference.