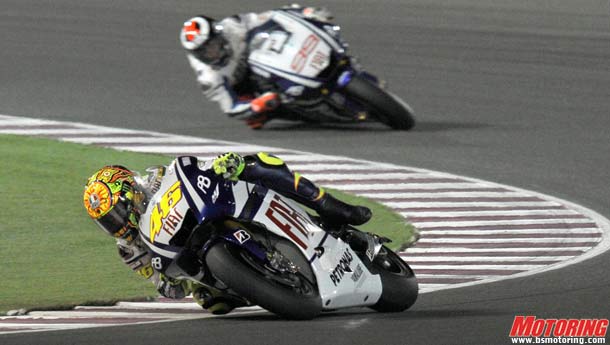 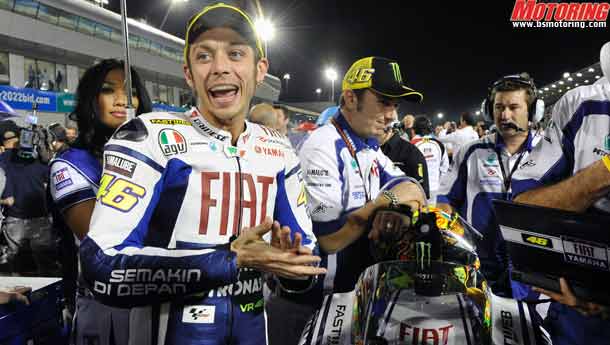 It might have looked all set for Casey Stoner's fourth successive Qatar GP win, what with the Australian taking pole and all, but things didn't work out in favour of Ducati. Stoner crashed out of the race on the sixth lap, despite a good two-second lead over the rest of the pack. This handed the race over to Fiat-Yamaha's Valentino Rossi and Jorge Lorenzo. But it wasn't all easy for Rossi. The Doctor was hounded through the race by Nicky Hayden, the Kentucky Kid who seems to have gotten his wings back. Also breathing down the neck of the reigning MotoGP champion, was Andrea Dovizioso, who even managed to steal the lead from Rossi at one point in the race. Rossi retook the lead though, and decided he wasn't going to take things easy. He began putting in some quick laps, increasing his gap to the rest of the pack. He pushed so hard, in fact, he ran out of fuel on his slow down lap after the race, and had to get a lift on a scooter back to the pits.

Coming in second was Rossi's team-mate Lorenzo. It looked as though Hayden would manage a third-place finish, but he wasn't able to stop Dovizioso from storming past him at the last moment.

And in the first race of his first full season in MotoGP, Ben Spies managed to finish a solid fifth spot on the grid. Spies made up four places on his opening lap itself. Spies finished the race less than four seconds off the pace of race winner Valentino Rossi.

For the man who began his record 300th race start, it wasn't the best race. Loris Capirossi only managed to finish ninth on the grid while his Rizla Suzuki team-mate Alvaro Bautista crashed out of the race.

The next race of the 2010 season is being held on 25th April, at the Motegi track in Japan.