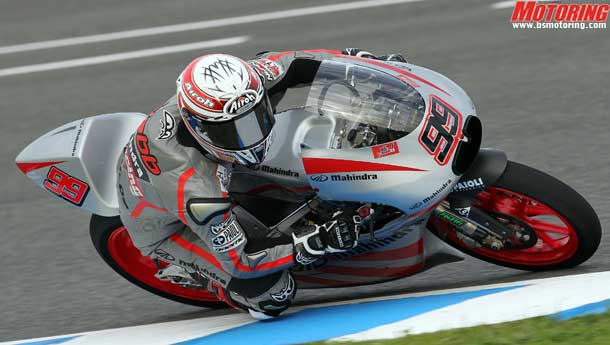 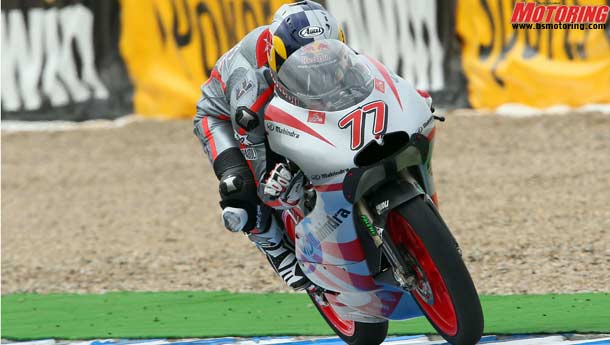 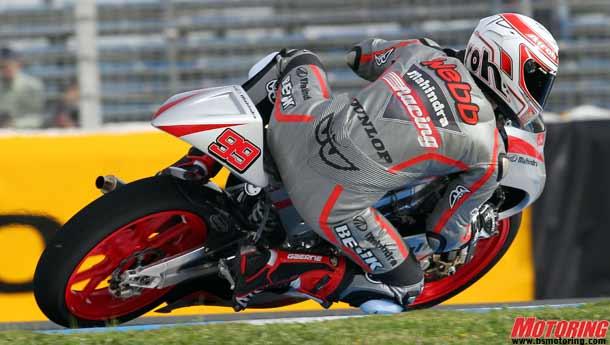 In only its second race, the Indian-owned Mahindra Racing team made history for India as it achieved its primary ambition – finishing in the top 15 to take home its first World Championship points.

Racing in treacherous damp conditions made worse by intensifying mid-race drizzle, German rider Marcel Schrötter picked his way through from a modest start after qualifying 23rd. Then, as others fell victim to the demanding conditions, the 18-year-old started to pick his way forward. After 15 of 23 laps of the 4.423km-Jerez circuit, he had moved from 24th to a points-scoring 15th. But he was not done yet, gaining two more place as the race wore on to finish 13th.

But the team’s joy was tempered by the thought it could have been even better. English rider Danny Webb had made a blazing start from 19th on the grid to finish the first lap 14th. Running strongly, he moved forward over the next laps until he was up to eleventh shortly before half distance. Riding to the limit to hold the place from his pursuers and with his rear tyre starting to slide badly, he paid the price on the tenth lap, crashing heavily at the exit of the corner leading onto the back straight. He sprained his ankle badly and picked up a bruise on his forehead when some gravel got under his visor, and was not able to rejoin the race.

“I am very happy that we achieved our first points on a fantastic weekend for India with our country winning the cricket World Cup. We are pleased to take three points, but our target is much higher. Marcel was going very well at the end of the race – as fast as the top five riders. I am very disappointed for Danny. He was 11th when he crashed, but with the way the race went he could have been sixth or seventh if not for that. We have shown the promise of Indian engineering on a worldwide stage and I hope we go on to enjoy as much success as our national cricket team in the future.”

“The beginning was not so easy. I started okay, but in the first two corners I was pushed out onto the wetter part of the track. It was dangerous, and I lost some positions. In the first two or three laps I couldn’t find my rhythm, and I lost almost five seconds on the group ahead. Then it came better: I found a good rhythm and a good feeling with the bike, and I was able to make some positions again. I knew I was faster than the others, so the finish was not so bad. I need to work on my speed in the early laps.”

“I started well, but the group was coming at me from behind, and I was pushing very hard to keep ahead. My back tyre was sliding ... maybe the setting was a bit soft. Then it suddenly let go and I spun out. I’m not badly hurt, and at least it was a strong race, and I can come back stronger for the next one. These things happen.”

Mahindra racing are next in action at the Portuguese Grand Prix on May 1.