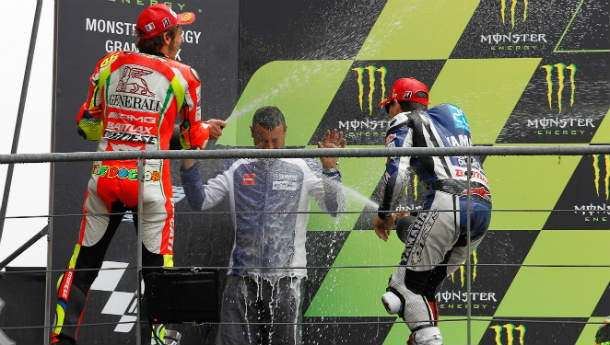 It was a rain soaked grand prix at Le Mans. And those rain clouds are always a sign of good things to come from Valentino Rossi. Thus it transpired, under a cloudy sky, with a wet track underfoot, Valentino Rossi took his first podium of the 2012 season for the Ducati team.

Up ahead of the order, it was Dani Pedrosa who started the race on pole. However, fourth-placed Jorge Lorenzo managed a strong start for the Yamaha team and shot ahead to the front of the grid. It was Australian rider Casey Stoner who was running in second for a good part of the race.

However, once Valentino Rossi managed to get clear of Cal Crutchlow and Andrea Dovizioso, he put in some strong laps and started to catch Stoner. While he did manage to pass him on two occasions, he was soon re-passed by the Honda rider. Rossi then waited till the first corner of the last lap and made his move on Stoner. This time it stuck and the Italian took his best-ever finish for the Ducati team.

Lorenzo now moves to the head of the championship standings with 90 points, eight points ahead of Casey Stoner with 82. Dani Pedrosa, with 65 points is third.