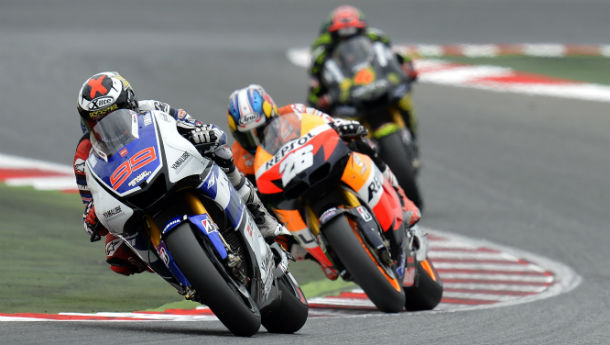 MotoGP's almost man had another 'almost' race win. Even though Dani Pedrosa started the 2012 Spanish Grand Prix from pole position, he wasn't able to keep Yamaha rival Jorge Lorenzo at bay. Lorenzo went on to take race win and also extended his lead in the championship ahead of Repsol Honda's Casey Stoner.

At the start of the race, it was Pedrosa who pulled ahead of the pack, while Ben Spies slotted into second. While Spies managed to pull ahead of Pedrosa, he only assumed the race lead for around 10 metres, soon running wide and rejoining at the back of the grid. This meant Lorenzo was able to close in on the man up ahead, breathe down his tailpipes and then pass him when Pedrosa's Honda wheelied involuntarily.

Finishing third on the podium was Andrea Dovizioso, who took the first his first win since he joined the Tech3 Yamaha team. Casey Stoner finished the race fourth, the first time this season that he hasn't finished on the podium.