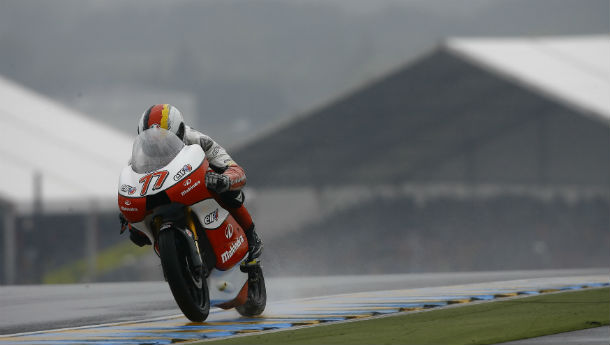 It wasn't an easy race weekend for Mahindra Racing, but by the end of the French Grand Prix at Le Mans, the team had something to celebrate after all. Marcel Schrotter had managed a twelfth-place finish in the very wet race, where more than half of the 33 starters didn't finish the race. Schrotter has thus taken the team's first points this season, and the first points for the all-new Mahindra MGP-30 Moto3 motorcycle.

While on the one hand Mahindra was celebrating the fact that they'd scored four points during the race, there was also disappointment because of rider Danny Webb's DNF. Webb started the race from the pitlane and was caught out by the tricky conditions, and was unable to finish the race. The 19-year old Schrotter started the race from the back of the grid, but managed to work his way through the field despite the tricky conditions and take home points.

'It shows that you must never give up. We are working hard to develop this new machine and there is a lot of work to do. But if we all work together we can do it,' said Mahindra Racing COO Mufaddal Choonia.

The race, fourth of 17 rounds, was won by French home hero Louis Rossi, survivor of a leading group that was ravaged by crashes.

We had so many problems this weekend and the conditions were treacherous. Our engine is quite aggressive, making it more difficult in the wet. From the start, it was so difficult – so slippery you could hardly go round the corners. By the end I just wanted to finish, even if I lost positions. But it paid off, because so many other riders crashed, and I did finish and it is good to get points.

DANNY WEBB – Did Not Finish

I had a problem on the grid and had to start from pit lane ... they’d already gone when I got going. I overtook one person and had quite a nice rhythm. I could see I was starting to catch Marcel, then I tried a little bit too hard, and the bike was down. We’ve had loads of problems this weekend, but we’ll keep trying and we’ll be alright.