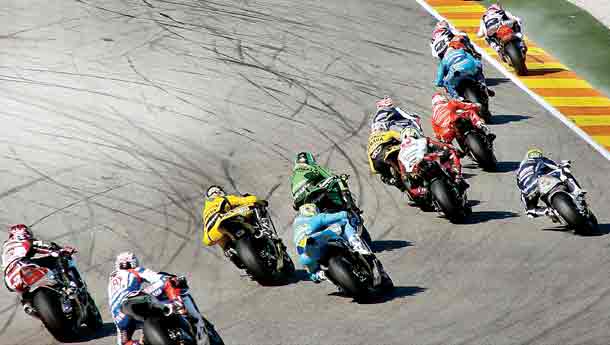 Contrary to my notion that European MotoGP races begin on Star and Ten Sports at about 2:15 in the afternoon, my alarm clock went off at five am. I was already awake, of course. Outside the double glazed windows of my hotel rooms, I could hear the cool silence of Valencia broken repeatedly by the howls of big mobike engines and, now and then, police sirens. Below, on the pavements, were innumerable motorcycles, all with some kind of luggage mounted. Welcome to the carnival.

It is still dark when we head out to the circuit. Our bus driver, Luis, speaks no English, but manages to explain that while the circuit is only 20 minutes away, on race days it can take up to four hours, depending on how many turn up. Ten minutes later, our bus is stuck in traffic. All around, you can spot Dani Pedrosa’s colours, Rossi’s colours and motorcycles. The bikes filter past the cagers and buses with contemptuous ease. Now and then,a smiling face in a helmet nods, acknowledging my rueful expression – they’re out there and I’m stuck inside.

For today, I have no press pass, just a 120 Euro ticket, courtesy of Honda. I head towards my designated stand, looking for my gate, my sector, my entrance and my seat. Much as I’d like to believe it’s free seating, it isn’t. Tip – in Europe, carry a newspaper or lots of tissues to racetracks. The seats are always soaking wet from the dew. We have good seats, taking in half the braking area into turn one, through the apex to the exit, before the motorcycles dwindle, sometimes crossed up into turn two. Valencia, thankfully, is the closest racetracks come to looking like a stadium, and you can see at least 80 per cent of the track from all the stands. The walk to the seat is punctuated by the smells of frying meat, the bustle at the numerous official merchandise shops with their Gucci/Prada prices and the early gourmands who are already lining up at the pizza, paella and sandwich stalls. The car-borne savvy ones carry a stack of coolers full of soda or beer into the arena, as the security staff quickly and efficiently weed out all the open containers.   When we sit down, the 125s are out on the sighting lap. Crackling two-stroke notes rip through the air as I see the first part of the MotoGP circus in action. The tiny things enter the first corner at immense speed and more than once, I stand up expecting the poor sods to run on straight into the gravel and crash just below the stand that is praying collectively for Hector Faubel.

I’m too far away to hear the crescendo of the start, but seeing that many motorcycles being stuffed into turn one looks scary. The sheer sound of the thirty-odd throttles being cracked open sets my hair standing. The race itself is closely-fought. The sun is shining directly into the big screen in front of me, and the commentary is passionate and humourous – but in Spanish. So I assume that the chap in yellow who was in front won. Well, good for him. Guess I’ll just get back home and catch a telecast again.The 250s are faster, but not that different. But this time, I am able to identify Jorge Lorenzo, Gabor Talmacsi and Hector Faubel. The Spanish supporters erupt into impressive screams every time Talma and Faubel exchange positions, which happens a lot during the race. It isn’t hard to get carried away by this wave of passion and I find myself jumping up and down thinking Faubel won. Happily for me, that’s what happened, and I get my confirmation in the desolate looks from the three boys seated further down the row, their proud flag-coloured Go Talma Go signs hanging limply.

Then, even as a blurred podium ceremony is being telecast, we hear the ‘diesels’ kick in. I cannot even begin to describe how loud and how good MotoGP motorcycles sound. Still hidden behind downed pit doors,the sound instantly sets the atmosphere, already at fever pitch, alight. Then, my host tells me that the paddock passes have arrived and I can go for a walk in the paddock. Super!

The paddock is behind the pitlane, full of giant trucks in team colours with busy looking people in team shirts milling about purposefully. The only people who pay any attention to you (me) are the crumpet. And there’s a lot of good looking women here – and more collagen, botox and silicone than necessary. But the glamour is unmistakable. I stand with the Kawasaki girls for a pic and feel the girl slip a couple of race number tattoos into my pocket. Without going into any details, I’ll tell you this – these two aren’t shy. As I walk towards Rossi’s motorhome, I hear a small engine behind me. I turn to see Randy de Puniet in shorts and a white tee, riding a pit scooter to the Kawasaki truck. He effortlessly navigates through the milling junta and disappears into the truck. Even before that sinks in, I see Dani Pedrosa, dwarfed by his 50cc pit scooter, slipping through the crowds as well. I look expectantly for The Doctor and then remember that he’s had a crash, broken some bones and cracked a rib or two. Crap. After ogling some more pit beauties (the Yamaha and KTM girls are invariably the hottest,my Spanish host tells me), I head back to the stand for the race.   The sight of MotoGP bikes, entering the first corner, is an experience right up there with your first kiss, your first motorcycle ride and your first flight. The engines are more or less unsilenced and the wave of sound is physical and violent. You will feel you hair stand on end, erupt into goose pimples while feeling your eardrums rattling their very foundations and even take a step back the first time. And forget the smooth, evocative sounds of fours like the Fireblade. These bikes sound violent and destructive. And with traction control, they sound bad entering corners. You can hear the Kawasaki, most famously, crackling, misfiring and complaining all way into the apex even through the collective howl of seventeen other motorcycles. The crowd is cheering Pedrosa who is closing in on Stoner, while I am sad to note that The Doctor is running second to last. The acceleration of the motorcycles, as you can imagine, is incredible. When the pack thins and spreads out a bit, you notice that even the slow bikes, like the Tech 3 Yamaha or Barros’ Ducati, are impressively quick. From the moment the power comes back on post turn 1 apex, the way they zap to turn 2 is incredible, almost as if you were watching a speeded up video.

The boom of a million firecrackers going off marks Pedrosa’s win and the end of the 2008 season. Rossi retired after 19 laps, shattering my dream of watching him win. But hey, I did shoot a pan shot of The Doctor – that must count for something.

I quickly wrench the paddock pass once more and return to the paddock. Grabbing another eyeful of gratuitously applied Lycra, I find myself standing in the middle of a crowd under the Yamaha motorhomes. You remember the TV footage of fans hanging about outside Rossi’s trailer? That’s me for now. In my hand is Rossi’s autobiography and a working pen. All around me, fans scream his name every time someone opens the door. Colin Edwards walks in. I instinctively yell his name. He smiles and waves... to everyone and disappears into the motorhome, followed shortly by a TV crew.I relocate to the front of the truck. Someone says Rossi isn’t staying in these trucks. After about twenty minutes, I see him. That same boyish grin, giant sunglasses, curly hair sticking out of a top-less yellow hat. Some important FIM-type is commiserating. Then a rider takes Rossi as pillion and rides towards me. I have the book ready, but a smiling Rossi passes within two feet of me. Let’s say that I met him, but he didn’t meet me. A two-stroke ‘braaap’ and Rossi is a flapping Fiat Yamaha shirt disappearing into the distance with an ice pack on one hand, a smile on his face and a crowd running after the scooter. Must get a press pass next time, dammit.

The walk back to the bus in incredible. The Yamaha girls make an appearance and they really are spectacular. Never have I seen such shapely specimens of the fairer sex, although I must admit that even at forty paces, a cosmetic surgeon’s rather skillful hands are evident. Then, I head back to the Yamaha truck and manage to get Davide Tardozzi to sign a team book I’ve also been lugging around. Slipping into the Ducatistas, I manage to pinch Capirex’s signature on my visiting card. Frankly, it looks like a bad scribble. I follow that up with Alex Barros’, who walks with me for a few minutes, while I try to remind him about the Unicorn launch in India. He smiles and shrugs, ‘If you say so.’ I also manage to get in the way of Randy once again, clock Talmacsi, Jeremy Burgess and more crumpet before I smoothly make my exit from the paddock. A couple of burly German types demand that I hand over my paddock pass to them, now that I’m leaving. I nod a firm no and head straight into a souvenir shop. Seeing Rossi up close has given my wallet wings. Fifty euros disappear in a blur, with at least twenty per cent spent purely because that minnie-four-eyes can’t understand a word of English, and I can only say hello, sorry and thank you in Spanish.

It takes us an hour and a half to return to the hotel. Our exit is marked with the passing of hundreds and hundreds of motorcycles around the bus. And I spot nothing smaller than a 400cc single in the crowd. I think I’ll move to Spain, get a permanent press pass and hang out at racetracks from here on out. Maybe one day, Rossi will wave a ‘Com’esta’ across the crowd as he passes by.