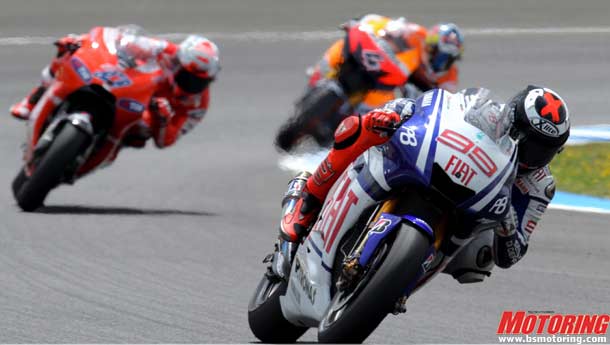 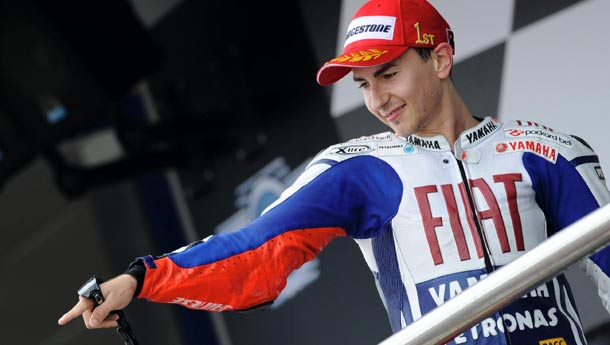 Spanish track, and two Spanish riders battling it out for first place on the very last lap of the race. That's exactly what happened at the Jerez circuit, with Jorge Lorenzo and Dani Pedrosa racing wheel to wheel and scrapping for position on track.

It looked like Dani Pedrosa was in for a sure win, what with him starting from pole and all, but it wasn't to be. When the race started it was Pedrosa who shot off at the head of the field. Lorenzo went from second to fifth though, while Valentino Rossi settled down in second spot, with the Ducatis of Nicky Hayden and Casey Stoner behind him.

Getting past Stoner wasn't an easy task for Lorenzo, but once he managed that he went on to overtake Hayden as well.

With just six laps to go in the race Lorenzo began focussing on his Fiat-Yamaha team-mate, Valentino Rossi. He overtook Rossi at the end of the back straight, and then went off in search for Pedrosa.

It was nose-to-tail racing during the last couple of laps, with Pedrosa just about managing to hold Lorenzo off. But at the end of the back straight Lorenzo took a look down the inside, with Pedrosa braking late to hold him off, but running wide, thus handing victory to Lorenzo.

Lorenzo then celebrated his race win by jumping into the circuit's lake!