Employees of Motherson Sumi Systems Ltd, work on a car wiring assembly line inside a factory in Noida on the outskirts of New Delhi (Photo: Reuters)

Motherson Sumi, the biggest automobile component maker in the country, on Friday announced the acquisition of Finland-based PKC Group, a wiring harness maker, for $609 million, or Rs 4,150 crore. This would be its largest overseas acquisition.

Also one of the biggest acquisitions by any Indian automobile company, this puts Motherson Sumi firmly on path to realising its annual revenue target of $18 billion by 2020. In FY16, its revenue grew to $5.7 billion, through overseas acquisition. At present, PKC Group’s annual revenue is nearly $1 billion.


The 30-year-old company, led by Vivek Chaand Sehgal, will now get a much wider presence in large markets such as North America and Europe in its wiring harness business. Motherson will make an open offer to PKC shareholders.


Sehgal’s company was originally set up to manufacture wiring harnesses for Maruti. A wiring harness is a set of wires, terminals and connectors running through a vehicle to connect several parts.


G N Gauba, chief financial officer, at Motherson, said, “This wiring business is close to our heart.” The company gets 14-15 per cent of revenue from this segment. The acquisition would double its contribution. “North America is one of the markets where we are looking for growth,” he added. 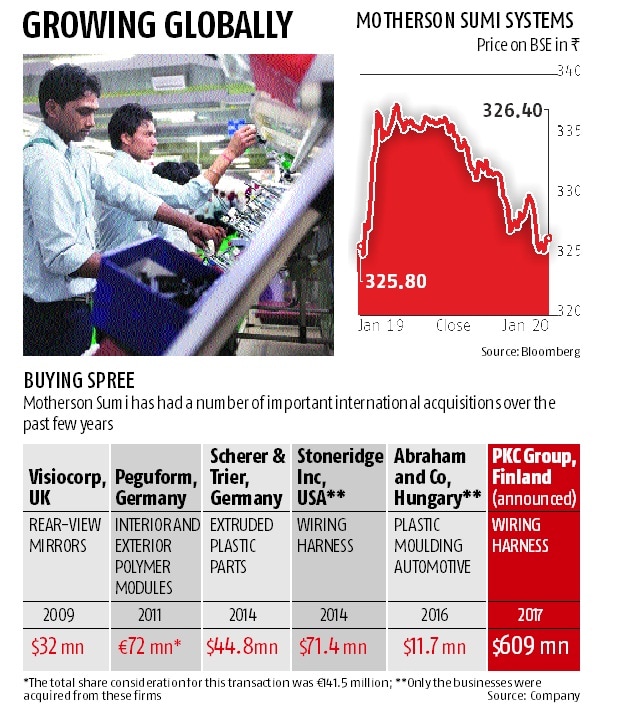 PKC, which has factories in the US, Brazil, China, Russia, Germany and other nations and employee strength of 22,000, is listed on Nasdaq and the Helsinki Stock Exchange. After the announcement of the acquisition, its stock on Nasdaq Helsinki zoomed nearly 50 per cent to 23.30 euros; its market cap rose to $562 million.


Motherson said it believed it could help PKC achieve its expansion opportunities, given its strong market position in the Asia Pacific region. The company wants to exploit the Asian transportation market, where leading global commercial vehicle manufacturers are looking to expand sales. This will also help Motherson grow its commercial vehicle segment revenues.


Gauba said Motherson raised Rs 1,993 crore through a qualified institutional placement in September 2016. “We also have internal cash accruals. I do not see a need for new debt,” he added. The company’s consolidated debt was Rs 2,175 crore as of September 2016.  As a strategy, Motherson aims to de-risk its portfolio and is consciously working on a policy where no single customer or country or component will constitute more than 15 per cent of its revenue by 2020.


Gauba said the company would continue to grow its business and that would bring reliability on any single customer down, even though the actual contribution may continue to grow.


German company Daimler, manufacturers of Mercedes Benz luxury cars, has quickly moved to become the second biggest global customer of Motherson from the sixth slot just a year ago. In doing so, Daimler has overtaken the likes of Volkswagen and Ford and now brings over one-tenth of the revenue for Motherson. German luxury car maker, Audi, remains the largest contributor to the revenue for last few years, accounting for about one-fifth of sales. The contribution of the Volkswagen brand has come down consistently. From 20 per cent in FY13, it now brings in less than eight per cent. Only 14 per cent of Motherson’s revenue comes from India operations. In the past 10 years, revenues have expanded at a compound annual growth rate of 40 per cent.


A large part of this growth has been inorganic and overseas. Peguform, a German company manufacturing polymer-based interior and exterior products for light vehicles was acquired by Motherson in 2011. It now brings about 70 per cent of the company’s revenue.


Going forward, the India contribution will continue to shrink, as Motherson was keen to do more acquisitions overseas. “We will continue to look for opportunities where we can add value,” said Gauba.