The Motherson Sumi stock has shed about 12 per cent since the start of the month on weak September quarter results, and worries that muted volume outlook could hamper its future performance. Following the September-quarter results, analysts have cut the company's 2018-19 (FY19) earnings estimates by up to 20 per cent — the highest for any large auto company, with the exception of Tata Motors. 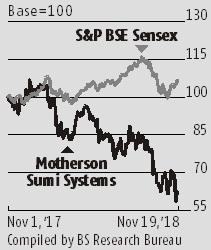 The immediate trigger for the earnings downgrades were the weak results in the quarter on the back of margin pressures. For example, new expansion at SMP (German subsidiary) has resulted in start-up cost of 35 million euros in the first half of FY19. This, coupled with integration of the acquired Reydel business and lack of operating leverage, dragged the margins of the business. SMP, which contributes about 45 per cent of consolidated revenues, saw margins fall 190-200 basis points (bps), both on sequential and year-on-year (YoY) basis to 4.2 per cent. The management indicated that the new SMP plants would scale up by the end of next year.

Even in the standalone (India) business, margins were down 279 basis points year on year (YoY) to 16.8 per cent on the back of higher raw material costs and weak top line growth, as car sales remain sluggish. While the higher input costs are expected to be passed on, the slowdown in car sales could affect the top line. What could offset some of the pressures could be higher content per car in the run-up to regulatory changes, be it to meet safety or emission standards.


The key worry for the Street is the weak demand sentiment in the global markets. Major auto makers have been warning of margin and profit slip ups, and this could affect Motherson’s growth prospects. Though there would be headwinds in the near term, the company continues to guide for a revenue target of $18 billion by 2019-20 from the estimated 2018-19 consolidated revenues of around $10 billion.


While there is a scope for improvement in margins, the volume headwinds warrant cautious approach. Do not bottom fish at these levels.