Employees of Motherson Sumi Systems Ltd, work on a car wiring assembly line inside a factory in Noida on the outskirts of New Delhi (Photo: Reuters)

The stock of Motherson Sumi has gained about 67 per cent over the past year on expectation that higher growth and margins at its overseas subsidiaries and steady performance in standalone business will help boost its financials. One of the key triggers for the stock is the performance of its overseas subsidiaries, SMR and SMP, which together contribute about 79 per cent to the consolidated top line.

The management has highlighted that globally, model life cycles — which include refreshes — are coming down and this benefits the company immensely across its segments. This, coupled with higher demand from automakers and the existing order book of Rs 94,900 crore (for the two subsidiaries) should reflect in good revenue growth going ahead. Margins for the subsidiaries, which have more than doubled over the past five years, are expected to move up further given higher capacity utilisation levels from the production ramp-up of the nine plants commissioned over the past two fiscal years.


The standalone operations, too, are on a strong wicket if FY17’s performance is anything to go by. Revenue growth at 18 per cent was double that of sector growth for passenger vehicles, which came in at 9.4 per cent. Analysts expect the company to maintain an annual growth of 15 per cent over the next two years on rise in orders from automakers, increase in customer base and higher content per car given the changes due to new technologies and emission norms. The BS-VI norms, according to the company, will lead to complex wiring harness systems requiring higher number of sensors and use of electronic systems. 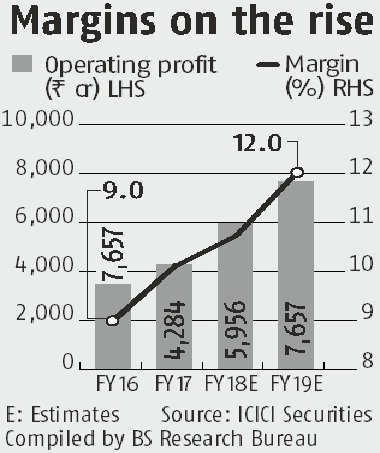 Analysts at ICICI Securities expect the company’s net profit to grow at an annual rate of 44 per cent during the FY17-19 period to Rs 3,218 crore (FY19) on the back of increase in revenues and operating profit margins. FY17 net profit stood at Rs 1,621 crore.

One of the risks investors, however, must keep in mind is the high client concentration risk with Volkswagen accounting for 40 per cent of consolidated revenues in FY17. This number, though, has come down from 44 per cent earlier as the share of Daimler increased from 7 per cent earlier to 11 per cent now. The company has reiterated its goal that no country, customer or component would constitute more than 15 per cent of sales, though it has some way to go before being able to achieve this goal. The higher client exposure given the emissions scandal was the key reason for the stock’s muted performance in CY16.


At current levels, the stock is trading 22 times its FY19 estimates and offers good returns potential for long-term investors.