Motherson Sumi firing on all cylinders 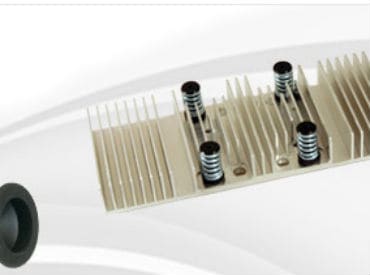 Helped by strong sales both in India and of its overseas subsidiaries (SMR and SMP), auto components Motherson Sumi reported 15 per cent year-on-year growth in revenue to Rs 10,018 crore for the quarter ended September 2016. While subsidiaries, which account for 85 per cent of the sales, grossed higher revenues to the tune of 14 per cent, domestic business too did well growing 20 per cent. This was, however, lower than Bloomberg consensus estimates of Rs 10,431 crore. While operating profit came in at Rs 1,007 crore up 15 per cent over the year ago quarter, net profit was up 26 per cent to Rs 480 crore. Though operating profit was in line, net profit was above estimates of Rs 371 crore. The outperformance helped the stock gain 5 per cent in trade on Thursday.

While sales at SMR which makes exterior rear view mirrors among others was up 16 per cent, sales at plastic parts maker SMP was up 11 per cent, both in euro terms, compared to the year ago period. Operating profit growth at both companies was higher at 17-20 per cent. Margins for SMR came in at 9.6 per cent (30 basis points higher than previous year) while that for SMP came in at 6.4 per cent. Adjusted for start-up costs at SMP, margins were at 7.1 per cent, as compared to 6.8 per cent last year. As the ramp up of its plants and order execution takes place, the margin number is expected to go up. 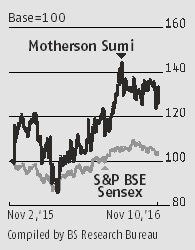 While its two key overseas subsidiaries have started executing orders worth Rs 23,000 crore during the first half of FY17, the company indicated that it has won new orders worth Rs 12,000 crore during this period. With this, the total order book is at Rs 89,000 crore. The Street will view the new order wins and customer diversification as positive given the issues it had to face from Volkswagen group after the emissions investigation. Post this issue, the company set a target that no country, component or company would account for more than 15 per cent of revenues. The management indicated that broad basing and addition of new clients will ensure that they move towards this target.

The Indian business too saw strong revenue and operating performance. While revenue growth has been on an uptrend, up 13 per cent in the March quarter to 20 per cent in the September quarter margins at 21 per cent were also 30 basis points higher than the year ago period. The trend is expected to continue as the company increases the content per car and gets a bigger share of new launches. Notably, the domestic auto industry is also seeing traction in volumes.