Monterey Pre-Historics - Pigging it out 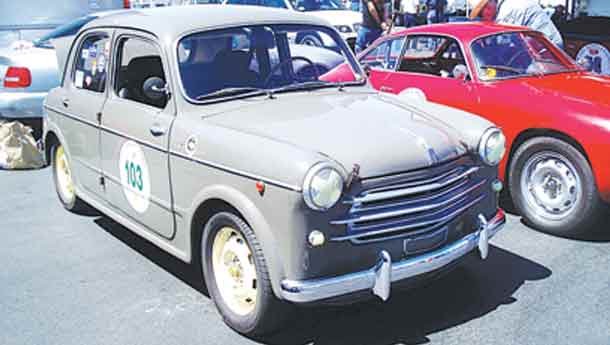 A 'dukkar' Fiat at Laguna Seca!Welcome to the Monterey Pre-Historics

The most famous vintage racing event of the year in the United States is the Monterey Historics held every August at Laguna Seca, on the same weekend as the Pebble Beach Concours and Concorso Italiano. Tickets are pricey and there are lots of people around. Crowd control and parking are strict.

However, the weekend prior to the event, the track is open to all Monterey Historics participants for practice. The event is called the ‘Pre-Historics’ by people in the know and is a closely guarded secret. Other than the vintage racers and their families, there are very few other spectators. We parked in the paddock to chat with old friends and make new ones. We drove up the hill in our own cars to photograph the cars at the corkscrew. There were absolutely no restrictions on parking or mobility. Best of all, it was completely FREE.
Martin Swig is a Fiat fan. Although he can afford any car in the world, he loves his Fiats and Alfas. Most of his friends own classic Ferraris, Porsches and Jags, but Martin wouldn’t be caught dead driving some high priced exotic. He likes affordable classics and entered his aluminium bodied Alfa and a few pre-war Chryslers in the Historics this year. The organisers wouldn’t let him enter his beloved Millicentos in the Monterey Historics, since they are not exotic enough (Yes, it happens in India too! – Ed). Not one to be stopped, he brought a beautiful all original Millicento in 65 bhp tune to the Pre-Historics. Martin’s friend found this flawless, original example in Milan and had it shipped here to add to his collection of Millicentos. Martin’s oldest son David (all of 22 years) was the lucky one sliding the Fiat around the track. David recently graduated from college, and is a budding automotive journalist.

These gorgeous old cars are not as reliable as a Toyota Qualis. Each one of them had an attending mechanic to carry out repairs between track sessions. The Fiat (Fix It Again, Tony!) was sputtering from fuel starvation. The ancient original steel mesh fuel filter was disintegrating. Rust and sludge from the ancient tank were fouling the carbs. David rushed off to town to pick up some pantyhose (nylons) so that ‘Tony’ could create a makeshift fuel filter before the next session. And she was back in action, along with the other exotic metal.

In the 1950s, spectators used to wander the pits and interact with the crew. They would get up close to the cars. Fortunately, at the Pre-Historics, racing is still intimate, just like it used to be.

Discussions before the 1959 Alfa Romeo Sprint Zagato takes off

Another runner at the Carrera Panamericana, this hard-to-come-by 1952 Ferrari 340 with a unique coupe body style is powered by a 4.1-litre V12

Not one, but two Gullwings get prepared to stretch their long legs at practice

Original 1966 Ford GT40s duelling on the track, just as they did years ago

This 1959 Porsche 356, with its lightweight construction and precisely engineered 1600cc boxer motor, is a veteran of the Carrera Panamericana

A classic Fiat hanging out with other classics!