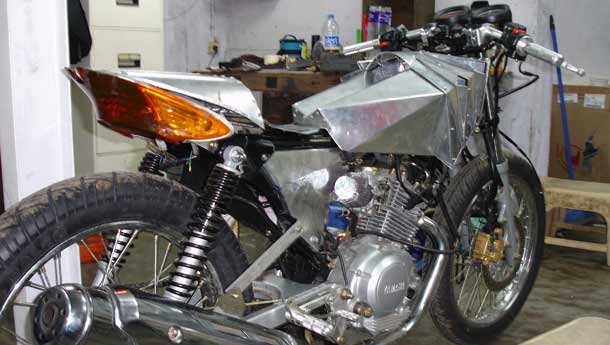 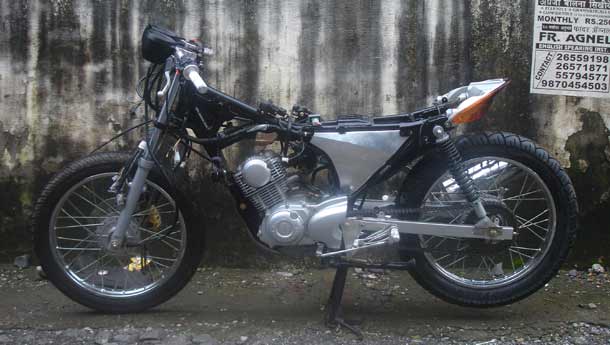 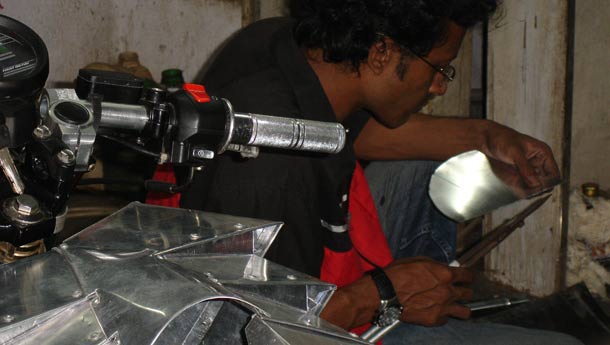 We showed you a stripped down Yamaha Gladiator last month with our little ideas on how we were going to react to Ishikawa-san’s (Yamaha’s CEO) challenge of a biker build-off. Maximus is BSM’s second project after Thunderclap and we’d decided to make this concept a one-off motorcycle. So we’ve been at Zubin Ponappa’s garage (I think of it as a hang out) working overtime with rubber mallets, aluminium shears, a walking hack (Shumi) saw, jig saws, reamers and an out of control drill machine in our efforts to cut sheets of metal, hack blocks of aluminium and drill them out and even get some filings into our eyes. But more importantly, in true build-off style, we’ve been stuffing our faces with huge portions of chicken and binge drinking on colas without keeping an eye on the calendar. So it’s just like the television programme, where the clocks have come full circle and we’ve just started putting Maximus’ armour back on.

Well, it’s finally here. No more surprises, no more peek-a-boo shots and no more excuses. This, dear readers, is our very own Maximus – the project Yamaha Gladiator that we’ve been going on about for the last three months. This is BSM’s second project bike after our first love, the Thunderclap, although this time around it took more than just a few pictures, scale models  and one tin-bending craftsman to come up with a Maximus.

So, on the team we had Bijoy and Mandar Sawant, an aspiring artist, and they were in charge of designing Maximus. Then, Zubin Ponnappa and I were left to execute the design, while Shumi was, well, executing the executors for overclocking the deadlines. Mandar drew up a few sketches, keeping in mind that Yamaha’s 125cc commuter was called the Gladiator. He went all out to give the bike the armour, jagged edges and industrial look that a Gladiator should (would?) have had.

Think tank
We decided to go with a Gladiator-like body armour design for the tank, with chunks of overlapping armour plates. Initially, we decided to go down the easy route and tried cutting up PVC sheets, but then we like challenges. So, beating sheet metal was our next choice. But putting that much sheet metal on the motorcycle would have been as good as getting an ox to ride it to the contest, so we decided to experiment with sheets of aluminium. Mandar got a whole bunch of medieval warrior pics to get an idea of what he could actually translate onto the motorcycle. We were looking to build something unusual, something that wasn’t run-of-the-mill, yet something that would go as fast as it would drop jaws. Basically a beautiful, fast, prototype. In all honesty, we’d rather have just taken the engine and the chassis and worked on it from the ground up, but design briefs are there to be followed, aren’t they? We went through with a WDPSPT (well developed painfully slow prototyping technique), as opposed to the rapid prototyping that all big manufacturers go by. This was a three stage process, beginning with building the body work in cardboard, then with a thinner grade for the first draft and once we got the shape and dimensions right, we used a thicker grade of aluminium. Zubin is now an expert with the shears and has clocked so many hours cutting aluminium, he is now eligible to earn his doctorate in er, cutting aluminium.   Back bender
The rear end of the Gladiator was a tough call. Yamaha’s brief was that some part of the original motorcycle had to remain intact. So if we were going to rework the tank, which we were, and do away with the bikini fairing (it was just too ordinary looking to go on to a concept Yamaha) we had no other choice but to keep the taillight. So we did. We also decided to shorten the rear subframe by a couple of inches to make the motorcycle look more compact. With Shumi discovering the black art of a hacksaw, he’s still on a chopping spree. We strongly advise you to wear your riding armour, and hide your motorcycle, the next time you meet him. Coming back to the tail end, we covered the unit with sheet aluminium and riveted it down to the base plate of the seat. Maximus also got new shoes (sorry, just one shoe) in the form of a 3.50-18 Ralco Black Panther (Rs 1100 with tube). In a neat 15th century tread pattern, even.

Side show
With the tank and the chopped tail-piece, Maximus looked small yet menacing, but the bulge around the centre made him look a tad too lazy, which was very uncharacteristic of the bike. We could literally hear the bulky airbox and the battery holder pleading with us, so we obliged and threw them away. A free-flow K&N air filter (RC1060, Rs 2000) was slapped on and a battery bracket off a KB100 (one which lets the battery slide in sideways, Rs 80) was welded to the frame. Off with the bulk and in with the new side panels that were bent inwards and continued from the lines of the tank. With the trimmed-out belly, Maximus was at his finest.

Heads up
So we’ve given him a coat of armour, spruced up the rear and tucked in his belly. What really remains is the face of this machine. We were keen on a totally radical design, but time constraints and lack of resources made us opt for practical over radical. After scouting every nook and corner of Mumbai’s bike markets and junk yards, we came upon a headlight (local aftermarket shop, Rs 800) that was a distant replica of Yamaha’s FZ1n. No second thoughts, we grabbed it. Shumi wasn’t too happy though, he wanted Maximus to have a bigger head... his (see pic).

Bits and pieces
Ok, so we’re almost done, but small bits and pieces have to be bolted on to complete the machine and make it look more special. Enter aluminium handlebar grips (Rs 150), ‘Yoshimura’ rearsets (Rs 1500), clip-ons (Rs 400) and some fries to go with that yummy KFC chicken (Rs 1450. Ooh… er…) The rearsets were my responsibility, so I started off with a jigsaw and a big aluminium plate. After bits of flying aluminium, or rather chunks of flying aluminium and an out- of-control drill, I managed to get it fixed and more importantly to work. Shumi successfully reduced the rake angle and mounted the clip-ons, while I broke a mounting tab on the switch gear trying to fix it back. He’s one up on me now. The exhaust that we’ve retained on Maximus is the stock Gladiator exhaust, hacked and reworked.   Rub-a-dub
Now that everything’s built and fixed back, we have to sort out the paint job, but Bijoy turns out to be a fan of brushed aluminium finishes. Days and hours of buffing wheels, drill machines, emery paper, rubbing compounds, buffing compounds and nothing seemed to brighten up Maximus to a level that we were satisfied with. Then Zubin discovered a little unlabelled bottle in the back of his cupboard that did the trick. The brushed finish finally got a level of lustre that was probably going to have Pablo in a bit of a spot at the shoot.

Rolling start
The stickers are on and the tank is topped up for Maximus to go out on his first  ride. A month in the workshop has left Max with a drained battery and with his kick starter in the bin, it’s time to jump start him to life. He put-putters to life with the exhaust at idle remaining rather silent, as compared to the muted muffler on the stock machine. But once you gas him up, boy, how that putter turn to a PURR.

Ergonomics on the motorcycle are just right, at least for a guy of my size (there must be some advantages to being a project coordinator, right?) and you have to ensure that you stay well clear of any of the one million jagged edges, unless you’re the type who’d like to have a bonsai for a family tree. Once you’re seated with everything tucked away, you’re pretty comfortable – at least I was.

During the course of the project, we hacked off everything that wasn’t of any function on the motorcycle. Out of Zubin’s garage flew the various guards, much plastic, the tank, the footpegs with mighty heavy assembly, the main stand and a zillion mounting points all over the bike. That in itself put Maximus about 22 kg down on the scale. Then throw in an all- aluminium tank, side panels and a small seat cowl and you don’t need to max a math exam to tell you that the bike’s going to be quicker, much quicker.

Off the blocks, Maximus is raring to go. He leaps off the line to shave almost a second off the 6.8 second 0-60 kph timing we clocked on the stock bike. The chopped exhaust needs you to be active on the throttle, as the revs drop fast, but once you’ve got the hang of it, it’s great fun. Taking Maximus around a corner is oh-so-delightful, thanks to the lowered seat and the efficiently mounted rearsets (I’ll take a bow for that). Hanging off the seat has never been so easy, and I was tempted to have my first knee down experience. Common sense and borrowed leathers got in my way.  And for once, we didn’t complain about the twin shock set-up at the rear, since it added to the butch look.

Given that this is the only Maximus in the world, we resisted our urge to pop wheelies, do a burn out or any of the other antics you see in this magazine otherwise. Heck, we even stopped touching it after somebody slit their finger on the razor edge. He’s the perfect piece of machinery to be parked in your living room, actually. But then it all went terribly wrong. We road-tested it. Yes, that means Pablo’s already putting in his application in triplicate and Bijoy’s using the editor card, but the keys are deep in the project coordinator’s pocket as he’s deviously planning a ride into the sunset – never come back. So, Yamaha, please take Maximus from us, before one of us does actually sneak off with it – and put it into production, while you’re at it.