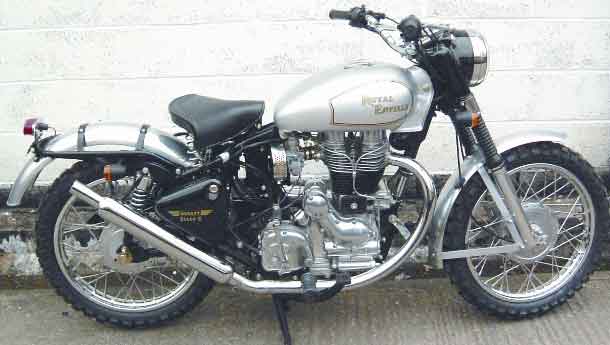 If you’ve come to believe that throwing chairs, taking a sledgehammer to a pre-wrecked car and sixty-eight tantrums-a-minute are the core of motorcycle customisation, you’ve been watching too much American Chopper. You need to get out in the sun, dude.


The reality is each of Teutels’ bikes cost more than your penthouse and despite the considerable expense, they mostly cannot go around corners, are top-flight pains in the butt in traffic and your lady, without exception, has to take the cab and meet you there.

In stark contrast, Indian motorcycle customising is still in a relatively nascent stage, and we’re far from the days when Discovery’s new show, Great Indian Biker Akhada, beging airing. Thing is, Antony Ollukran belongs to that very future timezone. In an arena full of upstarts, Antony’s reputation runs back more than two decades. Nearly every Bullet that has ever stopped anyone in mid-anything has usually been forged by his muscular arms. This particular one, for instance, ‘Oh, its just something I slapped together in less than a month.’

He added with a bit of trepidation, ‘Every year I do a rush job custom for Ridermania, and somehow I’ve been winning the best custom award for four years running.’ In complete contrast to the builder, Antony’s bike drips attitude like the creature in Alien. The look is called ‘Brad Pitt in Speedo.’ The tank is stock, but the original fenders – messy as a sailing ship’s rigging – were junked. The replacements are neat, minimal coverage jobbies that let the engine take centrestage. Painted a deep blue-grey (that looks black until you squint from four inches away), the machine is gorgeous. But if Brad had a heart condition, he wouldn’t be much fun to hang out with, would he?

Antony’s customs are special in that their beauty runs deep. Sort of like a supermodel with a heart. Or Angelina Jolie. Anthony took a Thunderbird 350cc motor, and as he puts it, ‘perfected it.’ He basically junked all the bushes in the gearbox, followed shortly by the clutch assembly, piston and carburettor.
The gearbox now runs needle bearings, the clutch is a bespoke seven-plater, the piston is oversize and the carburettor was replaced with a larger 32 mm bore unit. Finally, the cams were reshaped with special super-hard material (which he proudly says costs Rs 12,000 a kg). The air filter was junked in favour of a K&N-style local cone filter, for more airflow.

Given his long years of skill and practice at putting engines together, the engine proves to be utterly solid, with a compression so high that Shreenand was about to regret having asked to ride the bike for the pan shots. But we’ll just get to that in a bit. The idea of using Karizma alloys with the spokes in stock matt black and chroming the circumference was a master stroke. Anthony has a preference for tyres that offer on/off-road grip, having once been shoved rudely off the Goa highway by a trucker, hence the block-tread Duros at either end.

Anthony brought in an Eliminator fork for the front end and the Shogun speedometer to match the 18-inch wheel’s calibration. The braking job was offered to a Karizma disc mounted on the front wheel hub, while the rear wheel wears a heavily modified Pulsar rotor and calliper. Then, in a single day, Anthony crafted the swingarm brace and monoshock rear suspension, based on the Unicorn’s gold-n-red unit.

Bolt on the flat, slightly swept-back handlebars, chrome headlight, single Shogun rev-pod and tiny tail lamp and you have a runner. Or not. Pablo enforced about twenty-odd runs past the lens and Shreenand found the going pretty tough. I’ll bet that when he’s sixty-five, he’ll feel each of the fifty-odd kicks he needed to keep the engine running through the session.I’m glad to report, though, that the surfeit of engine stalling was all Shreenand. The bike does have a heavy kick, pointing to superb compression and a very tired BSM newbie, but starts up quite easily once you get the knack – swing, and give gas only at the very end.

We did have a little trouble with the right side (and upside down shifting) gearbox, but the experience was amazing. The engine breathes deeply and clearly and runs on a lungful of fresh air at all times. The result is that revs rise and fall with a natural rhythm we’ve not encountered in too many Enfields.

Power is easy to come by, and once you pass 3,000 rpm, the machine is loping along very calmly with flattering amounts of power available on demand. The gearbox shifts very smoothly for a Bullet gearbox and while I did miss a shift or two, the quality of shift was far better than the spoon-through-mud feel of the Lightning I rode about four years ago.

The brake combination is superb as well, and in thorough Bullet style, the maximum braking can be had from the rear brake. On the smooth stretch, the monoshock felt quite nice, but the damping made the speed bumps a bit hostile to my back.Climbing off the bike, it is easy to imagine a machine like this on the Enfield showroom floor. With a left-side T’bird style gearbox, it’d have a fair shot at attracting the upper echelons of bike buyers and somehow, fit right into the current lineup. What comes as a surprise, given the fickle nature of most Indian customs, is that I can see a not-so-leisurely ride down the 650 km highway to Goa, just for a beer.