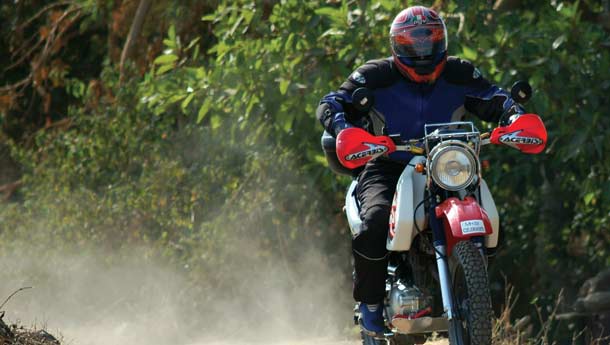 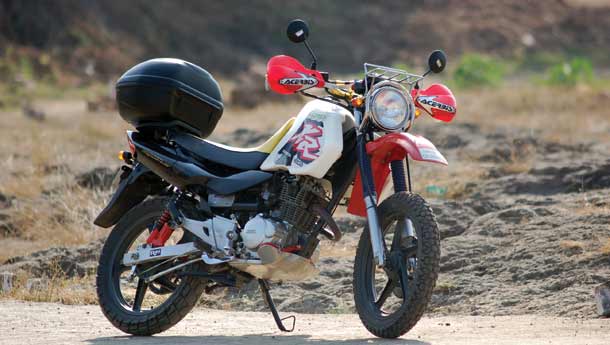 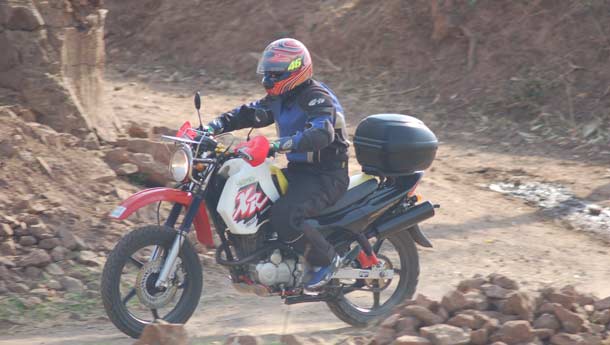 I fell twice because I could not get my feet down.’ That is the raison d’être of this Karizma. Yes, it is a Karizma, for those who’re still gawking at it wondering what the hell it is. The story begins two years ago, when Pune’s Raju Shaikh decided to elope to Ladakh with a handy DT250. At first glance, the motorcycle seemed perfect for the trip. 250cc dirtbikes are light and powerful. They’re tall and almost impervious to the elements. The long travel suspension would make magic carpets of Ladakh’s famously weatherbeaten roads. And unlike most street bikes that take the task on, water crossings would be light work.

But obviously, that isn’t how it worked out. On two occasions, Shaikh bit the dust because his feet would not touch the ground comfortably from the saddle. And the man is neither a novice rider, nor a pint-size MotoGP racer-type. He’s a normal 5’7” ‘average-physiqued’ Indian.

So for the 2005 trip, he decided to build himself the right platform to go clambering all over the Himalayas, including the impassable Marsimik La. The motorcycle would need to prove itself on a ride that would stretch from Delhi to Ladakh via Manali/Sarchu and continue via Kargil to Srinagar and back, with a ride to the glorious Pangong Tso thrown in. The choice of the Hero Honda Karizma was thought through as well. Shaikh needed a platform that would be unstressed, reliable, comfortable and still fast enough.  Hell, that just about defines the bike.

Now, while you and I would think a stock Karizma, maybe with a set of Cramsters thrown on, would be good enough to waft through mountain passes, Shaikh wanted to go the whole hog. He wanted a motorcycle not just able, but suitable to the purpose. Being an experienced mechanic who repairs, maintains and works with an array of machines that extend well beyond the Indian production spectrum, he had access to parts from abroad.   So a Christmas wish-list of sorts was drawn up for the project bike. A large capacity Acerbis (legendary name in off-road motorcycle replacement/enhancement parts) touring tank was brought in. The sturdy plastic tank has a capacity of 35 litres, more than enough to span the far flung fuel stations in the mountains. No more heartache at Tandi wondering if the motorcycle would manage 360 km on a tankful or not. Important, for the Karizma returns barely 30 kpl under normal situations, a number that would plummet once the high altitude, low gears and high revs got together during the trip.

Acerbis also supplied the knuckle guards, which serve the twin purpose of keeping the paws out of the usually biting wind, and protect them from the ground if you’re smart enough to keep a grip on the bars when you’re going down. They’re also supposed to stop thorny plants from damaging your manicure when riding in the brush. But since you’re above the tree-line most of the time in Ladakh, that would be okay. Then came the big-buck Marzocchi (yes, the Italian maker of drool-worthy shocks) rear twin shocks with inboard piggyback reservoirs, the Givi top case and loads of smaller bits.

While the parts came, Shaikh set about raising the motorcycle’s ride height. He essentially hacked the bike into two pieces at the headstock. He then rejoined the two bits with an additional bit of metal in the middle to keep the rake/trail the same, and to add strength to the frame. Normally, this is the sort of mod that we run from. Done badly, it can cripple the motorcycle and give the structure the integrity of a politician. However, Shaikh’s work is well above par, and it only took a couple of minutes in the saddle to grasp how well this was executed. The Marzocchi shocks at the rear are pretty well matched to the DT125 forks at the front. This gives the raised Karizma an even keel.

Finishing touches included the high exhaust re-routing (on the otherwise stock motor) and slightly tweaked side panels so people could tell that the original bike was, in fact, a Karizma. And at the bottom of the list were the off-roadable tyres, a dirt-style long-flat seat and the home made bash plate.   On the move the bike feels quite heavy to steer initially. This is due to the longer, meatier (and therefore heavier) forks and the length of chromed tubing that makes up the small luggage rack above the headlight. But once you get used to that, it’s a confident ride. Had I not known what a Karizma felt like, engine-wise, I’d never have guessed that the bike was based on one. The well developed torque curve of the Karizma feels effortless and ‘right’ on the loose stuff, and the bike just thrums along.

The suspension is superb, the tyres work well with the setup and you float through the craggy crater-scape comfortable and coddled. In full touring mode, obviously, a metal frame is added for luggage on both sides, the top case fills up and the motorcycle would probably feel a little heavier overall. But it still felt confident and able.

By the time I got off the bike, I was convinced. Raju Shaikh had managed to tick all the items off his perfect Ladakh bike. It went well, was exceptionally comfortable for a dirt-ready machine, it felt confident and yes, I got both feet down with my knees still bent. This is not a cheap mod set, and you literally feel the quality of the work. From the expensive Marzocchi’s composure to the extensive labour in raising the headstock height without altering the geometry, this is a job well done. And proven, since this Karizma and the man toured the Himalayas successfully (including the notorious Marsimika La ascent) last summer. In fact, so successfully that I might even try and bum the bike off the man the next time I decide to head for a cuppa chai at Khardungla.

Thanks to Raju Shaikh for a superb day spent getting dirty with the Karizma. If you’re persuasive, you could get him to mod your bike into this kind of effortless and manageable dirt bike too. Just call, +91-98220-58786