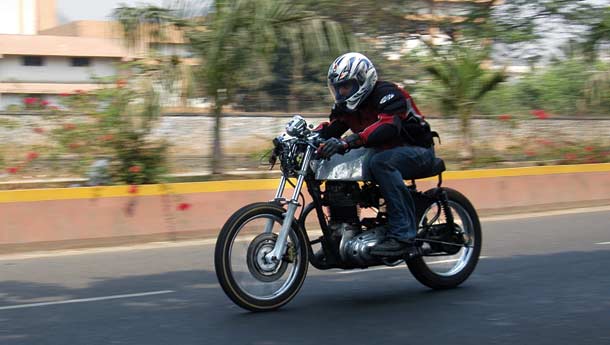 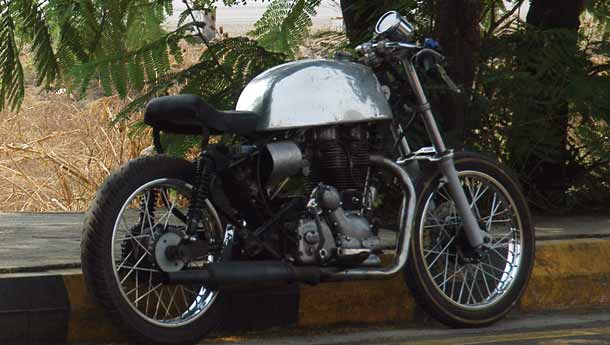 Royal Enfield hybrids aren’t uncommon these days. No, I’m not talking about fuel cell or hydrogen powered Royal Enfield Bullets (they’ve yet to discover overhead cams, for heaven’s sake) but the inane looking Enfield Davidsons you see around every street corner. The Enfield Bullet in its various forms has been around for generations and if everybody and his uncle haven’t owned one, they’ve probably had a go at tuning one and are India’s world famous Bullet tuners. So why am I telling you all of this? It’s because the bike you see in these pages is an Enfield hybrid, with a difference.

Sachin Chavan, our friend from RE, was in Mumbai and I managed to catch up with him and his little drag bike Nandi. The bike has a standard 500cc cast iron engine, but that’s where the similarity ends. The engine sports high lift cams (sports cams) and is fed by a 34 mm Mikuni carb that’s wired to a quick-throttle. The ignition is a standard TCI setup which signals two HT coils to light up the twin plug system. Yes, he discarded the decompressor and has absolutely no problem starting the bike.

Visually, Nandi sported an aluminium tank with a single seat setup. A street racer handlebar with specially made triple clamps held the front end together while a fork brace from a TZ250 worked against flex. The matte black, stock looking silencer is actually a straight-through stuffed with a little glass wool. Far too little we reckon, with Mumbai’s ever burgeoning stray dog population.

So now that you know what’s been put into this bike, let me tell you about my experience. Sachin’s really particular about who rides his bikes. I was buttering him up – and later, pestering him – into letting me ride Nandi at the Ridermania trackday, but Murphy ensured that the legendary Bullet Bose who was using it as a pace bike burnt a valve on the main straight. This shoot is officially my millionth try and Sachin can’t refuse me a ride, technically,  since I’m writing the article and all.   ‘Don’t rev her above 5500,’ he said in a stern voice. ‘Oh, and don’t wrong shift by mistake.’ Hmm, I thought. I kept the revs low and shifted early. Nandi has a 15 tooth (17 is stock) secondary sprocket, so the initial greed for speed is very obvious. The bike’s astoundingly loud even at low revs and feels very solid. No pun intended. I pottered about a couple of times for the camera after which Sachin said I could open her up.

So I slipped (Yes, slipped. Not thunked. Not graunched. Not gnashed... slipped) into first and dropped  the clutch. The initial pick-up was good but the mid-range felt even better. The quick-throttle works beautifully and the jetting is properly dialled in with absolutely no flat spots. You can feel the exhaust note reverberate as the rev counter rises and it sounds just perfect. Down a long stretch, I went through the gears, all five of them, and she shifted spot on. Oh, I don’t think I mentioned that the bike’s got a five speed gearbox mated to the engine, with the shifter on the right like a true blooded Bullet.

I put her through a couple of corners and she felt very stable. The 18-inch wheels with a race-spec MRF Zapper-FV up front makes the bike very flickable, but I was disappointed to still feel the weight the bike leaned. The aluminium tank is only 900 grams lighter than stock, so it wasn’t really working for the performance, but it looked superb.

‘Now that’s one fast Bullet’ was my instant reaction. Definitely fast enough for me to want one desperately, had I not been spoilt by the modern overhead cam 4-stroke machines. On second thought, it’s a brilliant project for my dads ‘69 Bullet 350 lying in the garage. Sachin, hope you are reading this, I’ll need your help.