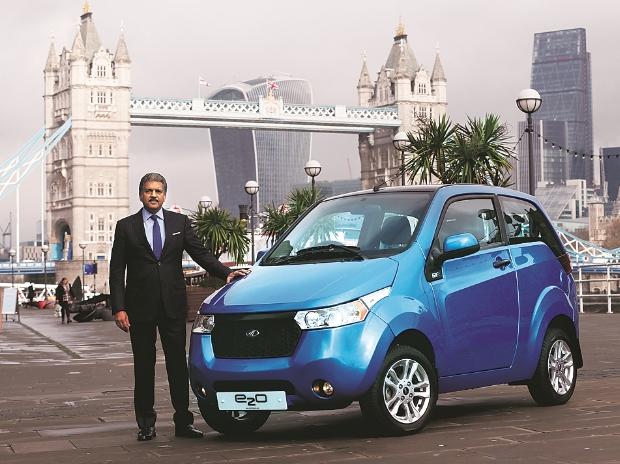 Anand Mahindra, chairman and MD, Mahindra Group, poses with a Mahindra e2o during its launch in London | Reuters

The government’s decision against formulating an electric vehicle policy may not be good news for Mahindra and Msportsra (M&M), the country’s biggest electric car maker. But a bigger setback could be around the corner for the sport utility vehicle (SUV) major.


The government is considering levying a goods and services tax (GST) cess on passenger vehicles (PV) based on length and carbon dioxide (CO2) emission from FY19 against the current criteria of length and engine capacity. This proposal in the draft auto policy will impact M&M more than any other player in the Indian PV market. M&M is the third-largest player in the Indian PV market after Maruti Suzuki and Hyundai.

Larger vehicles with length of over four metres but CO2 emission of less than 155gm could have a 15 per cent cess, while the highest cess of 27 per cent has been mooted for vehicles that are above four metres and emit over 155gm of CO2.


A large number of M&M’s models, including volume products such as the Scorpio, the XUV, the Xylo, and the Bolero, all fall under the highest cess category. The Verito sedan will also fall under this category. The company’s Thar SUV is less than four metres in length but has CO2 emission higher than 155 gm.


A BNP Paribas report last week that evaluated the effect of the CO2 cut-off on leading carmakers suggested that M&M is likely to be the most affected by the CO2 norm. Besides M&M, the report said only the Tata Safari Storme, an SUV, fell in the highest bracket.


M&M did not respond to queries related to its stand on this proposal or on how it could affect the company upon implementation. The industry needs to submit its comment on the draft policy this week.


The proposed 27 per cent cess is higher than the currently approved threshold of 25 per cent for PV cess. Any hike from the current rate will need Parliament’s approval. Vehicles like the Scorpio, the Bolero, and the XUV have an existing cess of 22 per cent and a GST of 28 per cent, taking the total tax burden to 50 per cent.

This is the highest tax imposed on locally-made passenger vehicles. But if the draft policy sees the light of the day, these M&M vehicles will attract a total burden of 55 per cent (28 per cent GST and 27 per cent cess).

A resultant hike in prices by up to 5 per cent could impact the competitiveness of these products vis-à-vis other industry players.

It must be noted that the CO2 emission threshold that is being suggested for PVs is not going to remain static.


The draft policy states that promoting sales of smaller and greener cars is the goal of the proposed GST framework.

“Values used to create slabs (four metres and 155 gm/km) and the cess rates will be reviewed and changed to meet the evolving environmental targets and changing market landscape,” it said.