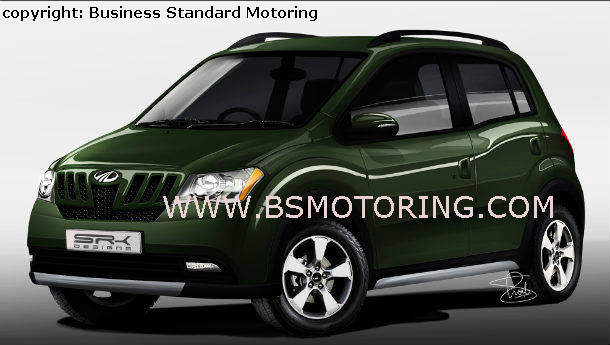 After recently launching the Quanto, a sub four-metre derivative of the Xylo multi purpose vehicle, it is readying a range of Monocoque, front wheel-driven vehicles, which could be priced at Rs 3-5 lakh. Monocoque, or unitary construction, is a vehicle-construction process, typically used to build modern small cars and sedans. This technique was used in constructing M&M’s Verito and XUV500. Designed and developed at M&M’s Research Valley in Chennai, the projects, codenamed C-101 (C for car) and S-101, are scheduled for commercial launch in 18 to 24 months.

Both cars are likely to be built on the same platform and would utilise similar powertrains to ensure cost efficiencies and strong returns on investment. To avail of excise duty benefits, these are being designed as sub four-metre products. Aimed at taking on the likes of the Maruti Suzuki Ritz and the Hyundai i10, these have design cues borrowed from M&M’s successful XUV500, albeit with crossover appeal and a raised ground clearance. The designs of both vehicles are being regarded as their unique selling points. The S-101 would be M&M’s cheapest SUV and may be front-wheel driven, since producing 4wd versions may raise costs.

Asked about these projects, Pravin Shah, chief executive (automotive division), M&M, said, “I will not be able to talk at this stage. It’s too premature for me to share any information.”

M&M is known to be developing a range of small petrol and diesel engines for these vehicles. The petrol motors are being jointly developed with Ssangyong, its Korean arm, and are expected to be in the 1,000-1,200-cc engine capacity range. A new 1,100 cc, two-cylinder diesel engine derived from the XUV’s 2,200-cc mHawk engine is also likely to be offered. The company is keen to utilise best practices and is currently benchmarking its cars against the likes of the Volkswagen Polo and the Ford Figo. Production of the new small vehicles could be carried out at a new, $1-billion integrated plant the company is currently scouting land for.

Meanwhile, M&M is also preparing more variations of the Quanto, including a semi-automatic version and a four-wheel drive version with the more powerful mHawk engine, for both local and export markets.