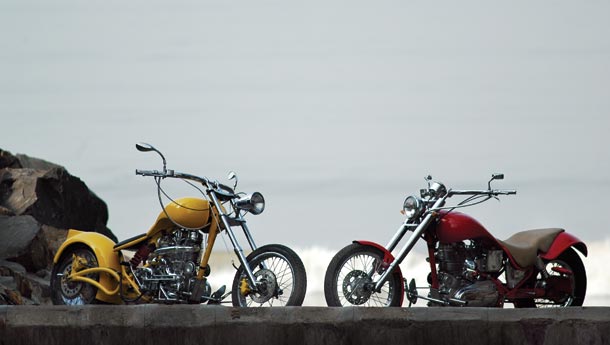 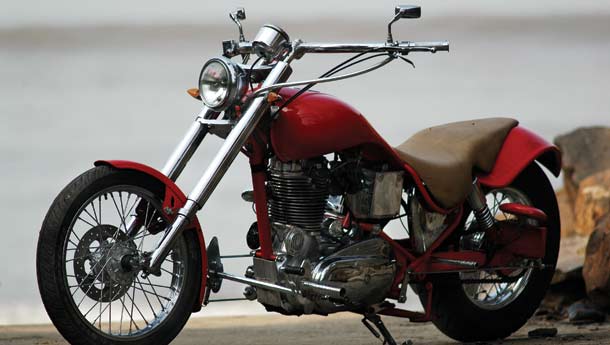 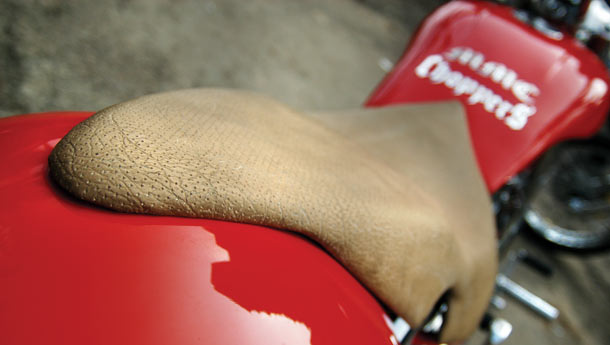 I’ve been intimidated by the Teutuls. Whenever I spy one of their bikes burning across the picture tube, I sink into this mental mire trying to imagine how you could ride a machine that looks so obviously off kilter. To me, choppers are disproportionate, unwieldy and while their visual presence is undeniable, I believe they digress from the functional honesty that makes motorcycles so evocative.


So when Akshai Varde of the Mumbai Motorcycle Company offered me a ride on Big Red, I was in two minds. One part obviously wanted to slide right in, get past the shattering kick start process (it is a well-kept 350cc Bullet motor, after all), clunk into first and roll off. The other part instantly wanted the comfort of clip-ons, a tipped onto the head riding position and razor-sharp steering... my spiritual home,
so to speak.

But then, I did slide right in – after Akshai started the bike. He explained how the gearshift had been cleverly swapped to the left side. The shift linkages drove a shaft that crossed the downtube, concealed in a decorative chrome tube, to the actual heel-toe shifter on the left side. So I promptly made an ass of myself, riding off in second gear and complaining about poor performance. To Akshai’s credit, he kept a straight face and then proceeded to demonstrate that Red was anything but slow. In fact, the process of chopping actually did a return to the root sort of thing. Red is lighter than a stock Bullet by more than a few kilos and its straight line performance is further liberated by its arcing, ear-splitting straight-through one-off exhaust.

I was quickly aware that I was well out of my depth when it came to handling this beast. That fat rubber at the back, and the reclining chair sort of rake at the front (the trail is probably more the wheelbase of the average entry-level motorcycle!) give Red phenomenal straight line stability. Once you get used to spanning the grips (some four feet apart) and the duality of the steering’s feel – great leverage from HUGE bars as well as a humongous amount of weight thanks to the excessive trail – riding is a doddle.   I gave up the ghost of shattering fast straight line speed and settled in to a sedate, and still quite loud, pace that I realise now is more or less the right speed to ride a chopper. When you are riding something as spectacular as this, you should not be in a hurry. Give all the camera phones time to focus and click away. You are the celebrity, at least as long as you are in the saddle at any rate. No reason to hurry off it, then.
Perhaps my impression of the difficulties of controlling choppers is slightly comical. For moments later, Sachin Pitale, the impish graphic designer who works with MMC, rolled off on Red, struggling only to reach the odd control lever, but otherwise doing a marvellous job of handling a machine three times larger than him.And Yellow is even bigger.

Red is one of Mumbai Motorcycle Company’s (MMC) first customer machines. Yellow belongs to MMC’s part owner Ash Chandler and easily spans eight feet between axles, and apart from the fully chromed Bullet engine, is completely un-stock. The gorgeous chassis hosts a superb paisley one-off swingarm and a purpose-built rim for the 210-section tyre, which forms the central point of the design. Once you get over that, you will notice the flush fitted tail lamp, the little winglets at the swingarm’s end that mount the disc’s calliper and tiny turn indicators. Allow
the eyes to continue to sweep forward, and you will come to the eighteen-inch high seat, the gargantuan tank, paisley themed footpegs and the raked out front end. To achieve that kind of rake, triple clamps were fashioned for both machines.

As the fourth member of MMC, Ratan Satara, ran around tucking away bits of wiring from the machines for the photos, the full story of Red, Yellow and the MMC came out. Chandler and Varde started out seriously intending to do their own chopper thing, without the tantrums, antics and muscular overload, of course.   Chandler, for instance, is quick to clarify that ‘We’re not the average mod-shop. You can’t dump a Bullet on us and say ‘make shiny.’ We take our clients through the design process. They tell us what they want and once we agree on their custom, then we go to build.’ Askhai adds, ‘A build can take up to two months, although we are trying to cut the lead times down.’

By this point, I’m still not at the stage where I’m considering joining the MMC’s rapidly aggregating customer list. But that is just me. I know cruiser enthusiasts are already wondering the wherefores. So I ask Chandler what a bike would cost. He says, ‘I won’t take Yellow and Red as examples, because they’re both personal statements for their owners. To give you a cost idea, let me say that a bare bones job should work out to around a lakh and a bit, including the Bullet it is based on. From there, the sky is the limit... the more custom bits you add, the more the time and cost grows.’

Now consider this; Yellow and Red are both running prototypes. There is wiring to be concealed, brake lines to be re-routed and sheathed and the odd detail to be polished, finished or touched-up. And yet, they’re already like raw, supermodels (minus makeup). Wherever we went, people slowed for a longer look, passers-by forgot where they were headed and kids on errands forgot shopping lists.

Which is brilliant. I can’t even begin to imagine the riot Yellow and Red would cause if they turned up at a posh nightclub, with suitably clad riders and better halves on board (Yellow has a detachable pillion seat).

And guess what, you could have one of your very own in the club’s premium, velvet roped-off, parking lot. Just dial +91-98212-19299 and ask Ash and Akshai at MMC to help you dream up your very own custom chopper.

BSM emphatically recommends wearing helmets on motorcycles. The baseball cap in the lead shot will not protect you in the event of a crash. Helmets also happen to be waay cooler.