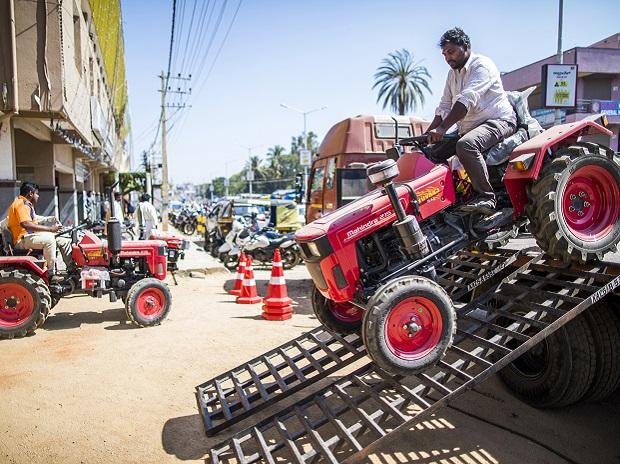 In addition to the strong operational performance, a 50 per cent jump in other income and lower finance costs helped the company post a net profit of nearly Rs 12.6 billion, up 67 per cent over a year

Powered by strong volume growth in tractors and commercial vehicles (CVs), albeit on a low base, Mahindra & Mahindra posted robust 23 per cent growth in revenue to Rs 133 billion for the June quarter.

While volume growth in the automobile segment was 19.6 per cent, that of the farm equipment segment was up 18 per cent over the year-before quarter.


The utility vehicle (UV) portfolio (43 per cent of automobile volume) continued to underperform, with growth a little under six per cent. All other segments in the automobile portfolio had double-digit growth. Within CVs, growth at 19.5 per cent was driven by light CVs (under 3.5 tonnes), which were 40 per cent of the auto volume.


The company expects the UV space to grow 15 per cent in FY19. M&M would be hoping that new products such as the Marazzo, to be launched later this year, and refreshes should reverse its cycle of underperformance and market share loss over the past few years. In the CV space, it expects to be a full-fledged one, with the launch of 21 vehicles (including the intermediate range) over the next 18 months. The CV portfolio, say analysts could then be a much larger volume contributor to the overall automobile segment, compared to UVs. M&M is much more upbeat about the tractor space, where it has raised its forecast for industry growth for 2018-19 by a steep 300-400 basis points (bps) from the earlier projection of nine to 11 per cent. Growth in the current quarter is, however, expected to be muted, given the shift in the festival season to the December quarter. The company closed the June quarter with a market share of 43.7 per cent in this segment and intends to increase this, with launches such as of the aggressively priced Trakstar brand, mechanisation of the horticulture sector and growth from the high horsepower sub-segment.

In addition to strong volume and revenue growth, the operating performance has been better than analyst expectation. Operating profit was up 47 per cent over the year-before quarter at Rs 21.1 billion, marginally higher than the estimate of Rs 20 bn. Margins at 15.8 per cent were 260 bps more than in the year-before quarter. In addition to operating leverage from volumes and price hikes, an increasing share of farm equipment products and cost-cutting helped improve the operating profit and margin. Most of the gains on profitability have come from the farm equipment business, where margins rose 249 bps to 21 per cent. In comparison, those in the automobile segment are less than half that number. In addition to the strong operational performance, a 50 per cent jump in other income and lower finance costs helped the company post a net profit of nearly Rs 12.6 billion, up 67 per cent over a year.

While the quarter’s performance was in line with estimates, the response from the Street was lukewarm, with the stock ending flat on Tuesday. Given the strong prospects, investors could take exposure to the stock, which has gained about 24 per cent since the start of the year.