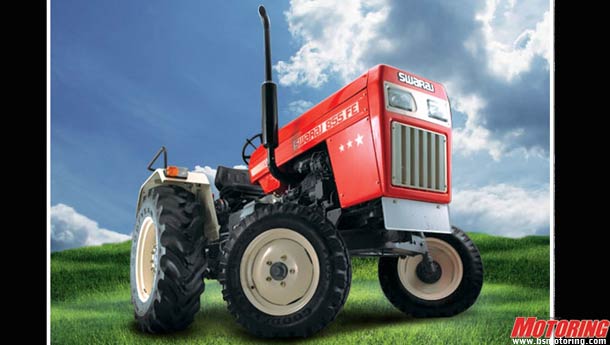 Farm equipment major Mahindra & Mahindra's (M&M) Swaraj division today said it was aiming to perform better than the industry's expected growth of 10-15% during the current fiscal on the back of good monsoon and higher minimum support price (MSP) announced by the Centre.

"The [tractor] market will grow around 10-15% and we are looking for a better than market growth," company's Chief Executive Bishwambhar Mihra told reporters.

"All the factors including monsoon, rural spending by government, shortage of labour and buoyancy in MSP are positive this year, which will drive the growth," he added.

Swaraj division of M&M posted a sales growth of 24% last fiscal against the market growth of 19.8% in the same year.

M&M, in 2007, had acquired a majority stake in Punjab Tractors which used to produce Swaraj brand of tractors, and in February 2009, it was merged in M&M as Swaraj division.

The market share of Swaraj division, which has two plants here, has increased to 12.4% from 9% in three years back and recorded sales of 60,997 units in last fiscal.

The division is currently operating at 120% capacity and has planned to spend Rs 50 crore in doubling the capacity of its foundry to 60,000 tonne.

"We are looking for second phase of expansion of our foundry here by doubling it and it will take six months to complete," he said.

The company is also planning to launch new fully air-conditioned tractor with power of 85 hp in next six months for the first time for the domestic market, Mishra said.

"These AC tractors will be for farmers who have huge land," he said, adding that the company would manufacture new tractor at its Mumbai plant.

Additionally, M&M is coming up with new plant in Andhra Pradesh with a capacity of 100,000 tractors per annum with an investment of Rs 350 crore.

"The new plant will also manufacture Swaraj brand of tractors of 40-45 hp, which has huge demand in southern India." he said.