A higher contribution of tractors in the overall sales mix helped Mahindra & Mahindra (M&M) beat estimates for the September quarter (Q2). It, however, could not cushion the impact of an overall decline in volumes, resulting in a 15 per cent year-on-year (YoY) fall in its profit before tax (before exceptional items) and a 15 per cent drop in revenue.

The Mumbai-based firm remained cautious in its outlook on passenger vehicles amid a prolonged slowdown and disruptions expected the switchover to BSVI emission norms.

PBT at M&M and MVL (company’s manufacturing unit) dropped to Rs 1,758 crore from Rs 2,161 crore, net profit fell 24 per cent to Rs 1355 crore in line with the revenue contraction of Rs 10,935 crore versus Rs 12,790 crore a year ago.  The drop in earnings was led by a 21 per cent fall in passenger vehicles and a 6 per cent fall in tractor sales. A benign commodity price and a larger share from tractors helped the company restrict the drop in operating margins.  It crimped to 14.1 per cent from 14.5 per cent a year ago.

“Q2 was worse than the first quarter for the industry in terms of volume decline. Given the uncertainties ahead (due to the current slowdown and transition to BSVI), we don’t see any uptick and the industry may limp till March,” said Pawan Goenka, managing director, M&M. 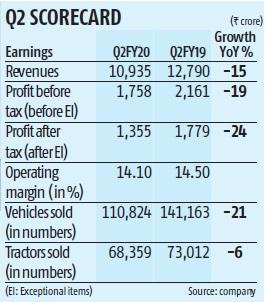 It’s the first time since 2001 that for two consecutive quarters that all the sub-segments of the industry have seen a decline, he said, adding the festive season, particularly Diwali, did bring some cheer amid the gloom and doom, as the retail sales picked up for most companies and helped clear excess stock in the channel.

M&M’s stock in its channels is the lowest in five years after the festive season, said Goenka. However, one cannot say whether the sales pull seen in October would sustain in November and thereafter, as the sales were driven by a steep discount by the companies.

The fact that both Navratra and Diwali fell in the same month aided volumes.

If the sales momentum does sustain in the current month, it will give M&M some headroom to dispatch more to its dealers and see sales move up at the wholesale level, said Goenka. Automakers in India count dispatches to dealers as sales.

The tractor business — the cash cow for the company — came to the rescue during Q2. Revenue from the farm equipment sector, which includes tractors, decreased 1.49 per cent cushioning the sharp 16 per cent contraction in the automotive business. “M&M posted better-than-anticipated numbers, driven by higher margins in the tractor business,” said Bharat Gianani, research analyst at Sharekhan by BNP Paribas. “Margins got the benefits of lower commodity prices and higher contribution in the overall mix,” said Mitul Shah, analyst at Reliance Securities.

Shah had estimated margins to fall 13.5 per cent.

In tractor sales, Goenka said, M&M fared better than the industry, which saw a decline of 10 per cent. He attributed it to the excess rains, which resulted in flooding and crop damage. “The monsoon was surplus by 10 per cent and highest in 25 years,” he said, adding that the tractor market might end the year with a 6-8 per cent decline.