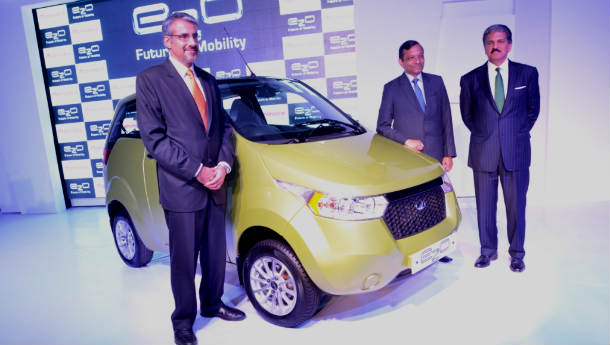 With the e2o, homegrown auto major Mahindra & Mahindra (M&M) could drive where no other Indian firm has driven before. The country’s only all-electric four-seater passenger car could well become the first vehicle from India to set sail for Chinese shores.

Mahindra Reva Electric Vehicles (MREV), which launched the e2o in India today, is developing a variant of the electric car for exports set to start early 2014. While the export variant would be first shipped to countries in Europe, MREV is also looking at opportunities to tap the growing market for electric vehicles in China.

Chetan Maini, chief of strategy and technology, MREV, said, “The export variant would be ready by early next year. We are looking at exporting the e2o to all markets we previously exported the REVAi to. We will also explore possibilities in China.” Nearly half the 4,750 units of the REVAi manufactured since inception were sold in 24 countries, mostly across Europe and West Asia. Developed by Reva Electric Car Company (now renamed Mahindra Reva Electric Vehicles) as the NXR, the e2o will replace the existing REVAi.

Abdul Majeed, partner and leader (automotive practice), PricewaterhouseCoopers said, “It makes a lot of sense for automakers to start exploring export opportunities in China. It is a huge market. Chinese customers are willing to experiment with new products. If a product is good, it shouldn’t be difficult to position it in relation to the competition in the short to mid term.” According to industry estimates, the Chinese market has the potential to absorb five million electric vehicles by decade-end.

The e2o was launched today by M&M at Rs 5.96 lakh (on road, Delhi). The price of the e2o will vary in different states, according to the subsidies provided by the respective statement governments. Anand Mahindra, Chairman, Mahindra Group, said, “If the incentive, as outlined by the government under the National Electric Mobility Mission Plan had come through, it would have given a push to the sales of electric vehicles. But we have gone ahead with the launch as we believe we have a viable proposition.”

The on-road price in Delhi includes a subsidy of around 29 per cent on the base price of the vehicle provided by the state government.

The concessions include 15 per cent subsidy as provided by the state government on the price of the vehicle, VAT refund of 12.5 per cent and a 50 per cent reduction in road tax to two per cent for registering the vehicle.

It is the most cost efficient car to own in India. Pawan Goenka, chairman, MREV, said, “The operating costs of e2o is 50 paise per km as compared to running costs of Rs5-6 per km of a petrol car. On driving an average of 1200 km every month, a customer would be able to realize savings in fuel cost of about Rs 75,000 every year. We will feel good if we are able to sell 400-500 units of the e2o per month.”

The car will be launched across eight cities – Delhi, Chandigarh, Ahmedabad, Mumbai, Pune, Cochin, Hyderabad and Bangalore – over the next three to four weeks. MREV has set up 253 charging stations in public places across these locations as support infrastructure for the vehicle.

The e2o is the first vehicle from the Bangalore-based company after it was acquired by the Mumbai-based Mahindra & Mahindra in 2010.

The car is powered by lithium ion batteries and would have a minimum range 100kms per charge. The e2o can be fully charged in five hours through any 15 amp plug point at home or at the workplace. The e2o consumes 10 units of electricity.In addition, the Mahindra e2o is capable of using the futuristic ecosystem of ‘Sun2Car’ to derive energy from the sun to charge the vehicle, while helping to protect and preserve the environment.

The car will be built at the MREV’s facility in Bengaluru which has the capacity to produce 30,000 cars per annum. The unit is amongst the biggest in the world making electric cars.