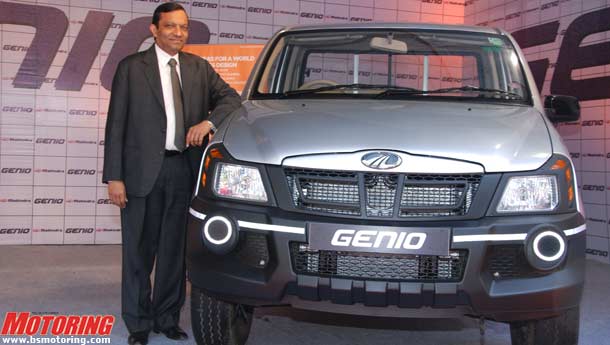 Mahindra & Mahindra, part of the  $7.1 billion Mahindra Group, today said that it is "keen" on exporting its newly launched small commercial vehicle Genio in the future.

"We are very keen on exporting this.. When we conceptualised this product, we were also looking at in exporting also...We are confident that it will drive the growth in the pickup segment...," Mahindra & Mahindra Senior Vice-President Sales and Customer Care Arun Malhotra said at the launch of the commercial vehicle in Tamil Nadu.

Stating that the company is already into exporting some of its products, he said, "the design, comfort and convenience from Genio is of the international standards" and that is one of the reasons for them to consider it for the overseas markets.

"I think per month our total exports (including Mahindra Scorpio) is about 1,700 units...," he told PTI.

Malhotra said the company began the production of Genio at its Chakan plant only 10 days ago and after serving the domestic market it would be "targeted" for the overseas market.

"We have to explore the domestic market first and then we will consider exporting," he said.

The newly launched Genio in Tamil Nadu market is positioned in the "captive" segment under the pick-up vehicle category.

"Most of the customers prefer to drive these kind of vehicles on their own and they expect some kind of comfort while driving.. That is why we have introduced car like styling and comfort in Genio...," he said.

Besides he said Genio is the first product in its category to be available in metallic colours.

Mahindra Genio would be available at Rs 5.05 lakh for the BS3 variant while the BSIV compliant would cost Rs 8,000 higher in Tamil Nadu, he said.

The Chakan plant near Pune has an initial capacity of producing 2,000 units per month which can be "ramped" up as and when required, he added.

In the first phase, Genio would be available in 70 dealerships of the company and gradually it would be extended to the 240 dealerships.

Meanwhile in Kolkata the company's Senior VP (marketing) Vivek Nayer said: "Our plan now is to expand the pick-up market. M&M enjoys a 75 per cent market share in the segment whose size is 85,000 units per annum."

He said that M&M has launched a new pick-up Genio on the 'ingenio' platform where its SUV Xylo was manufactured.

Nayer said that the company would manufacture 2000 units of Genio per month at its Chakan facility.

The total investment gone for the manufacture of Genio was Rs 225 crore.

He said that the pick-up market was growing at a sluggish rate of five per cent to seven per cent per annum.