Anand Mahindra, executive chairman of home-grown auto major Mahindra & Mahindra (M&M), was on a flight when his company announced its partnership with American car maker Ford last week, mainly for electric cars and connected vehicles. “The view at 35k feet shows it’s time for old friends to undertake a new exploration,” he tweeted.

The view has indeed changed since 2005 when the two companies called off their first partnership after working together for a decade in the Indian market.


M&M used to be the dominant player in the utility vehicle segment then. Indian buyers were not as discerning as they are now. Vehicular emission and safety did not occupy the minds of policy makers. Electric mobility and the need for less- or non-polluting vehicles were non-existent. R&D spends were low and so was the competitive pressure. India was not expected to become the fifth largest market for cars (experts expect it to emerge as the third biggest by 2020).


Pawan Goenka, managing director at M&M, says the changes facing the automotive industry globally are triggered by the accelerated rise of new technologies, sustainability policies and new models of urban shared mobility. “Given these changes, we see the need to anticipate new market trends, explore alternatives and look for ways to collaborate even as we compete and build powerful synergies that will allow rapid exploitation of the exciting new opportunities”.


The latest partnership with Ford, Goenka adds, will build upon the foundation laid through the past partnership between the two companies. The company did not respond to queries seeking comment on why M&M’s many earlier tie-ups with global players ended and how this one could be different. Besides Ford, M&M had partnered with French car maker Renault to make cars. Forged in 2005, after the Ford tie-up was brought to an end, the alliance with Renault lasted just five years. The 51:49 venture started selling the Logan car in July 2007. In April 2010, M&M bought out Renault’s stake for an undisclosed amount. 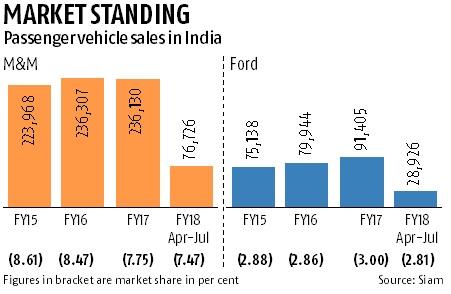 Between 2005 and 2007, M&M had also brought on board the US-based Navistar International Corp to mark its entry into the heavy commercial vehicle (HCV) segment. Two joint ventures were set up to manufacture trucks and engines. However, in 2012, M&M decided to buy out its US-based joint venture partner in two companies. “There are challenges in a joint venture; when there are two decision makers, there are different approaches to do business,” Goenka, then president (automotive and farm equipment business) at the company, had told Business Standard after the Navistar partnership was called off.


The first venture with Ford produced the Ford Escort cars in India. Ford took its ownership to 72 per cent in March 1998 and later increased its holding further, even as M&M restrained additional investment. Although Ford Escort sales did not achieve targets, it provided the Indian auto company exposure to best global practices in manufacturing, which it later used in developing its most successful product, the Scorpio. M&M sold its stake in Ford in 2005 to end its partnership.


This new partnership is going to be a much bigger and wider one. This time, the firms will explore joint development of products, especially electric and connected vehicles. The partnership will look to expand Ford’s reach in the fast-growing Indian market and improve M&M’s access to global markets. At present, both have a single-digit share in a market dominated by Maruti Suzuki and Hyundai Motor.


The partnership comes at a time when the government is energetically promoting electric vehicles and has set an ambitious target of transitioning to an all-electric fleet by 2030. M&M is the only manufacturer of electric passenger vehicles in the country and is well placed to ride the electric mobility wave that is being pushed by the government. Its first electric car, Reva, is no longer in production and an upgraded model called e2o sells less than 2,000 units a year.


Building greater capabilities with Ford — especially on such technologies as connected vehicles (a vehicle with internet access) — is expected to help it build on its strengths in e-mobility. The new alliance will also look at distribution of cars and sourcing of materials.


But will there be challenges? Can this partnership hold good for a longer period and satisfy the aspirations of both the partners? Indian auto companies have formed and broken several partnerships with foreign peers. The country’s biggest two-wheeler maker, Hero MotoCorp, ended its 26-year partnership with Japanese partner Honda in 2010 owing to differences in approach and aspirations. Chennai-headquartered TVS Motor ended its two-decade partnership with Suzuki in 2001. Tata Motors ended partnership talks with German auto major Volkswagen in August this year, five months after the two companies said they wish to jointly develop cars for the Indian and emerging markets.


One of the advantages that M&M and Ford will have is familiarity. “Since both M&M and Ford have worked together in the past, there should be few challenges in working together again,” says Ashim Sharma, principal and division head (auto, engineering & logistics) at Nomura Research Institute India.


M&M, which specialises in utility vehicles, could well take a re-look at the car segment with Ford after an unsuccessful attempt with the Logan. Ford has spare capacity, which can be used suitably by M&M. “Product development synergies can also be exploited with M&M bringing in frugal engineering skills coupled with Ford’s global know-how in advanced technologies,” says Sharma.


Last week’s joint announcement said teams from both firms would work together for up to three years and any further strategic cooperation would be decided at the end of the period. Sharma says the three-year period will give both sides an opportunity to reflect and smooth over any ripples before agreeing to continue the alliance. “The only tricky area could be the direct competition amongst product offerings,” he says.