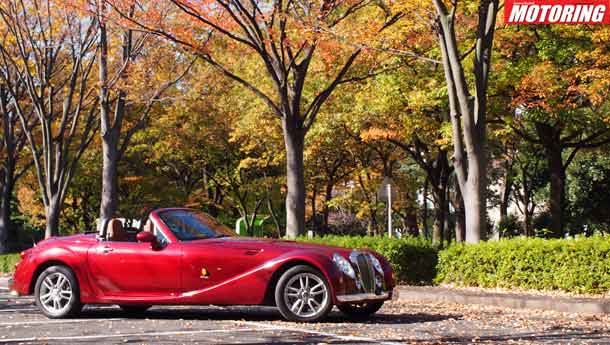 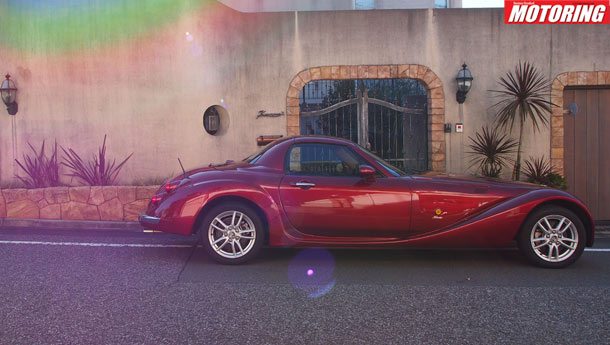 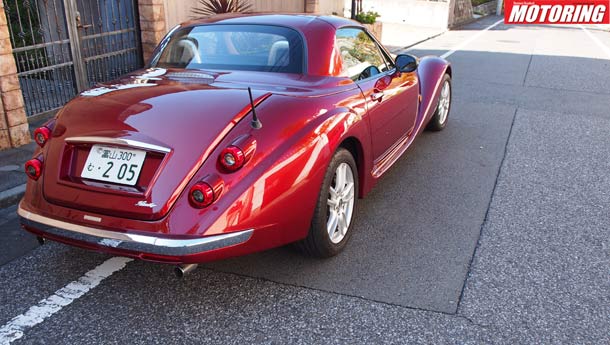 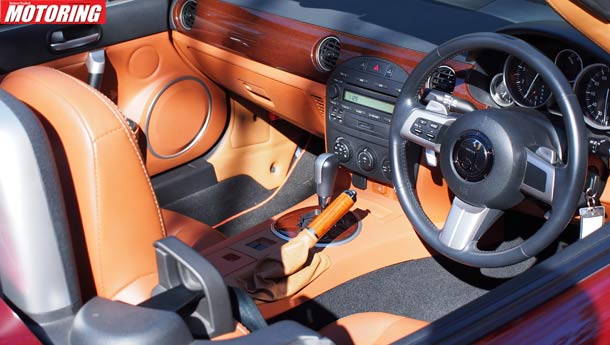 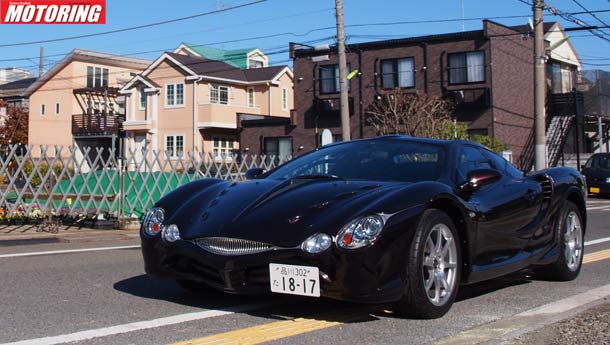 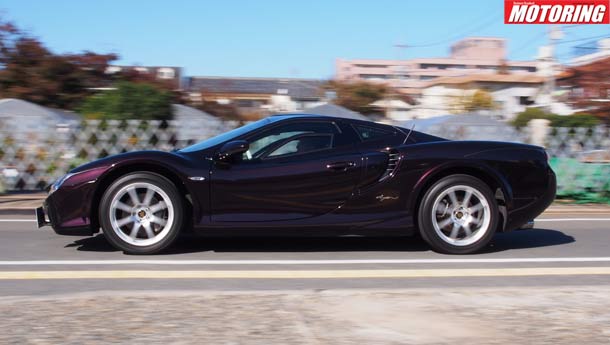 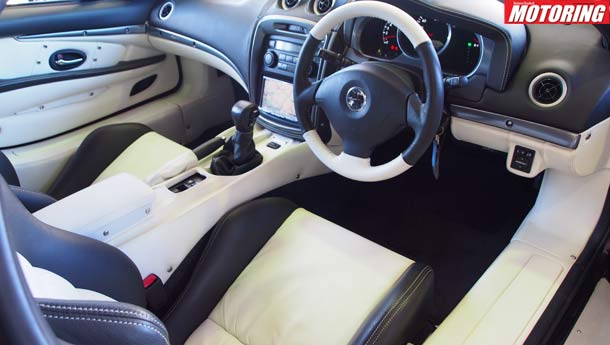 A while ago, I was intrigued by a friend’s use of the term ‘kvlt’ in both conversation and in the form of text on online forums. Further research revealed the answer to be simple; ‘kvlt’ was a cooler version of ‘cult’ – a more cult way of saying cult, if you will. Apart from the spelling, the principal difference between the two terms is that ‘kvlt’ is both pronounced and read as ‘k-v-l-t’, not ‘cult’– confused yet? Never mind. The reason I’m blathering on about the subject is that ‘kvlt’ is normally used to describe something that is phenomenally quirky, or outrageous, or funny (sometimes all these things at once), and there is no better way to apply the term than to Mitsuoka, the niche Japanese car company.

Back in 1979, Susumu Mitsuoka began the Mitsuoka Motor Company, a firm that was to essentially function as a coachbuilder, taking existing cars and slapping on its own bodywork. The first car that it built was called the, er, Bubu Shuttle 50, in keeping with the Japanese car-naming tradition of writing completely disparate words on pieces of paper, mixing them together in a bag and then selecting three or four at random. Over the years, it has built a series of completely nut-job cars, with equally fruity names – the Viewt (a modified Nissan Micra made to look like a Jaguar XK 120), the Galue (based on various Nissans and resembling a cross between a Rolls-Royce and a Bentley), the Le Seyde (a Nissan Silvia that looked like the love-child of the Batmobile and a Duesenberg) and the Dore (based on a Ford Mustang, looks like a gangster car from the 1930s).

All these cars are made by hand, an anachronism in the age of mass production, and they’re about as under-the-radar as running down the street naked, singing Alphaville’s ‘Big in Japan’; they’re also indescribably cool, despite the fact that many consider them among the ugliest cars ever built. I found myself in Tokyo a couple of months ago, and I simply had to go and drive some.

Kunihiko Fukui, Mitsuoka’s professorial general manager of overseas marketing, picked me up from the Yoga metro station, on the outskirts of Tokyo, in one of the company’s latest creations – the Like-T3, a trike-like electric contraption designed for city use. ‘I was actually in India a short while ago’, Fukui said, as we zipped through the streets and I froze half to death in the cold winter air (the T3 is open to the elements). ‘I went to ARAI to find out the homologation rules for our cars, because we wanted to take them to India, but the process was so complicated and mired in red tape that we gave up on the plan.’ I was amazed at the coincidence – an Indian journalist lands up in Japan, wanting to drive some of the world’s quirkiest cars, just after the company that makes them has been to India, wanting to sell them there. As we neared the Mitsuoka showroom, situated next to Tokyo’s Indian motorcycle outlet (how’s that for a kvlt location?), I could see a row of gleaming cars on the forecourt, hopefully set out for my driving pleasure.

Although I would have dearly liked to drive the variety of cars there, Mitsuoka’s two flagship models were the ones that caught my attention. The Himiko, a Morgan-like roadster built on a lengthened Mazda MX-5 chassis, looked absolutely retro yet completely modern – as a statement, it nailed the deal. In a lovely, deep shade of maroon, the car (named after a queen from Japanese folklore) glistened in the morning sun, almost as if it were itching to be taken for a drive; I was only too glad to oblige. Folding myself into the low-slung cabin, I found myself surrounded by… a Mazda MX-5 interior (duh, yeah!), albeit one that had been jazzed up with leather and wood. The Mazda is designed to fit around the driver, so the Himiko does the same thing – the powered drop top tucks away in 12 seconds, and you’re away.

Straightaway, I could tell that the Himiko works best as a boulevard cruiser. With a massive 70 cm stretch in its wheelbase, its long snout and low, flat stance make it stand out from miles away – even Japanese passersby, who are not normally given to staring or animated reactions, gave it an appreciative eye. The 2-litre, 160 bhp engine delivered sprightly performance, and the 6-speed automatic gearbox was reasonably competent in keeping up; sheer numbers, however, do not define this car. Given a straight, it’ll hit 100 kph in around 7 seconds, and it’s limited to a 180 kph top speed in Japan, so clearly you don’t buy one to blitz drag-strip records with. This car is best enjoyed as a ‘stand-out’ machine, which it does in spades; a nimble steering, grippy tyres and a fairly taut chassis give it a chuckable nature, but it’s as a conversation starter that it really excels.

In that respect, however, it is reduced to a whimpering wreck when compared to its stable-mate, the phantasmagorical Orochi. In Japanese, ‘Orochi’ refers to a mythical 8-headed serpent, and you can see why this car was thus named – it looks like a startled python with vents. The original concept, based on a Honda NSX, was called Nutella, if you can believe it; being named after a serpent is infinitely preferable to a breakfast spread-based moniker, if you ask me. There is nothing else on the road, anywhere in the world, that looks like the Orochi – the lines are at once swoopy, bulging and rounded, yet it manages to look fast, through all the jaw-dropping bodywork; the spaceframe, mid-engined chassis is entirely made by Mitsuoka, unlike its other offerings, and power is provided by a 3.3-litre Toyota V6, mated to a 5-speed manual gearbox. Power output? A leisurely 231 bhp, with 33 kgm of torque.

The cabin comes as a bit of a let-down, after all the jaw-dropping drama of the exterior. Sure, it’s quite well built, with high quality leather and other bits, but it doesn’t set your loins on fire in the way of other supercars. This, however, is the whole point – Mitsuoka claims that the Orochi is a ‘fashion’ supercar, with the emphasis being on functionality and ease-of-use rather than intergalactic performance and cutting-edge features; you certainly won’t find a gear selector from a Lexus RX in any other car that claims to be ‘super’. It’s a little difficult, at first, to reconcile the polar opposites of screaming styling and modest performance that the Orochi serves up, but once you get the ball rolling, it’s quite an enjoyable car.

Mitsuoka has certainly got the usable aspect of the car spot-on – it’s an absolute doddle to drive in any conditions, with the race-type double wishbone suspension providing excellent ride quality and a nice mix of cornering ability and comfort. There is no aural or engineering drama to match the styling, and 100 kph comes up in a sedate 7 seconds, with slightly dull brakes bringing you to a decent enough stop. Again, though, the Orochi isn’t about showing a Porsche 911 a clean pair of heels (an actual ‘supercar’ version of this supercar is a tantalizing thought) – it’s about eyeball-searing presence and individuality, factors which are wildly popular in Japan, where Mitsuoka is selling as many Orochis as it can build. It will undoubtedly make many mothers clutch their children as it passes by, and online forums abound with tags of ‘world’s ugliest car’, but you know what? If I had the money, I’d buy one – kvlt was never this mad.