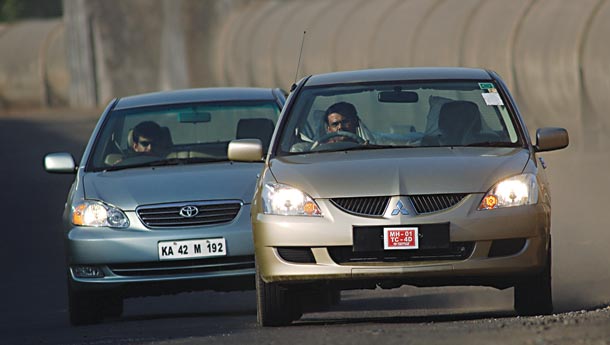 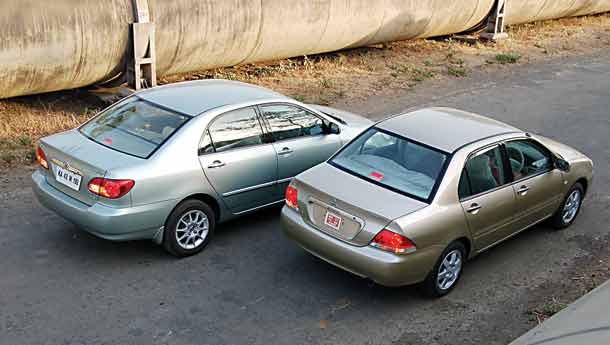 Okay, it may seem a little unfair that the Mitsubishi Lancer Cedia has to face the might of the Toyota Corolla, but the battle is inevitable. Little children and many, many adults think Corolla when you say ‘car’ across the world, and it is very often the gold standard by which other cars in its segment are judged by. In our country too, the Corolla is king in its crowded segment, and till the new Civic comes along, it’s all hunky-dory for Toyota. But till the Honda arrives, is the Cedia any threat to the Big Daddy of executive saloons? For that, you will have to read on. But let me admit one thing, the Cedia may be the underdog in this case, but as you will see, it’s not that under a dog. Let’s cut to the chase then.

Looks, stock and barrel
Everybody knows Toyota plays it safe. Which is why the Corolla will never win any design awards. It’s been designed in such a way that it appeals to somebody in Outer Mongolia as much as somebody in Puenta Arenas, so it better be universal in the way it looks. Okay, I’ll admit it looks expensive, and that its architecture is contemporary – you know, tall seating, a strong cab-forward design, a higher MPV-ish kind of stance – but that’s about it. Let me put it this way about the Corolla’s looks: when I parked the car each night, never once did I turn back to see it while it silently ticked.

The Cedia, on the other hand, isn’t going to make your hair stand on end by its sheer appearance either. But overall, there is something more special to it than the Corolla. It could be the well-defined headlamps or tail-lamps, the sharp crease above the grille or even that iconic Mitsubishi grille. The Elegance version is pretty humdrum in metallic colours, and looks smaller than it actually is. To redeem the situation, you have the Sports version – it’s tempting to buy one in red, slap on some sponsorship stickers, add some thick rubber and alloys and stick your name and blood group on the fender and rear windows.
Cedia: *****
Corolla: ****

Inside trading
The Corolla is longer, wider and taller than the Cedia, but you know what, both of them have an equal wheelbase. So though the Cedia looks smaller on the outside, it matches the interior room of the Corolla. Rear legroom is adequate in both cars, and what you would expect from cars in this segment. But the Corolla’s taller seating position is easier for entry/exit.

You have to give it to Toyota, the way they induce the ‘pride of ownership’ into each car they manufacture. The way the interiors are laid out, the dual-tone treatment, the little thoughtful features that it come with, the quality touch-and-feel all go on to make you happy you bought a Toyota every morning when you get into the car. The instruments light up with a bright all-round glow, there are numerous places to store little things here and there, the switches and the buttons look like they will keep functioning till WW III. The driving position is tall, and for a sedan, it has a commanding position. But is that what I want? No. But if you are on the wrong side of 40 and tend to drive for long periods daily, you’ll appreciate the seating ergonomics of the Corolla. I am yet to get there.

Which is why I find the Cedia’s driving position much more enjoyable and involving. It is tuned towards the driver, so the low dash, the triple-tone treatment, the sporty four-spoke steering wheel, the stubby gear lever, all make you feel that you just want to turn the key and start driving away. Mitsubishi is also pretty good when it comes to build quality, and the Cedia has got the right materials going into it as well. However, where it loses out to the Corolla is the switchgear and instrumentation. They look so dated in appearance that they won’t be out of place in the Lancer that’s still being sold in the country. Besides, in a car in this segment, I want to see automatic climate control, a good looking instrument panel with separate gauges for speedo and rpm, a few more cubbyholes and a 6-CD changer too. Sorry, Cedia, if not for these little bits, you would have come close to the big T.
Cedia: *****
Corolla: *****   Power play
Tragedy. Here was an opportunity for Mitsubishi to take the game close to Toyota’s invincible 1.8-litre powerplant. That’s because the Cedia’s 2-0-litre 16-valve SOHC inline-four is pretty legendary by itself. In the right hands, it can be tweaked to develop some outrageous power outputs that can say ‘FQ’ to not just mere Corollas but Skoda RSs too – you see, the Cedia has a sibling called Evo.

But that’s all wishful thinking, as what we have here is an engine that’s bigger by 200cc over the Corolla’s, yet does not develop proportionately more power. So what you get is 115 horses at 5250 revs and 17.5 kgm at 4250 revs – compare this to the Corolla’s 1800cc 16-valve DOHC with VVT-i that delivers 125 bhp at 6000 revs and 15.8 kgm at 4200 rpm. The Cedia’s engine is remarkably free revving and feels quite similar to the Lancer’s motor. Though it may not the match the Corolla in terms of horsepower, the extra cubes make it much more relaxed compared to the high-strung, high revving Corolla unit.

Thanks to the Cedia’s increased torque that arrives at lower rpm, it is much more driveable in urban conditions vis-à-vis the Corolla. And the gear ratios seem to be spaced in such a way as to make it friendly for the daily commute as opposed to extracting maximum performance from the engine. Both engines are paired with five-speed manual gearboxes. Both the gearboxes shift positively, but the throws of the Cedia are crisp and short compared to the Corolla’s cog box, and also allow for more enthusiastic shifting.

The Corolla’s gear ratios are spaced such that you extract maximum power every time you shift, thus making it dramatically quicker than the Cedia. Take a look at the timings, and you’ll see:
0 to 60 kph comes up in 4.10 seconds, as compared to the Mitsubishi’s 5.6 seconds. Impressed? Check out the standstill to 100 kph numbers: 8.06 for the Corolla, as against 11.5 for the Cedia. Okay, the Cedia redeems itself in the mid-range test, taking 7.7 seconds for the 80 to 120 kph dash, close to the Corolla’s 7.28 seconds. Guess that kind of seals the Cedia’s performance aspirations, in spite of the Sports version.
Cedia: *****
Corolla: ****

Hit the road
Finally, here’s where the Cedia redeems itself. The Mitsubishi has been through a ‘rough road package’ for Indian conditions, that means an increase in ground clearance and a slight change in damper ratings. It rides better than the Corolla, be it on smooth roads or rough ones, and absorbs uneven patches better than the Toyota. The Corolla gets unsettled over rough patches. Surprising isn’t it, especially for a car that will see its owner in the rear seat most of the time. This even after the Corolla has been through a slight tweak in its suspension package to offer rear passengers a better ride quality.

And when it comes to handling, both are evenly matched, but my vote goes to the Cedia simply because of its brilliant chassis that seems to pivot around the gear lever. The Cedia feels much more nimble than the Corolla and it is a delight to thrust its nose into curves – it is much more balanced than the Toyota and it shows. It may be no Evo IX, but I am sure that with a boost in performance with aftermarket tuning, the Cedia will come into its element. More outright power and torque will do justice to the Cedia’s superb underpinnings, heck, it deserves it! On the other hand, the Corolla’s engine performance and suspension package are evenly matched, and that makes it enjoyable around corners. If you ignore the MPV-like driving position, the Corolla can be as involving as the Cedia. Still...
Cedia: *****
Corolla: ****

Top dog
The underdog in this battle has its strong points. The Cedia bettered my expectations in terms of its dynamics and driver involvement – if only HM adds in more sophisticated goodies without increasing its price, it could pose some trouble for the Corolla. Oh, about 30 more bhp would be more than welcome too. That would make it attractive to a younger, self-driving audience compared to the Corolla’s older prospective customers.

Which can mean only one thing. The Corolla is the better overall automobile here and is the winner of this shootout. The Cedia is more fun, but the Corolla’s got too much going for it. It is a thoughtfully designed car and each component is built to appeal to everybody in the world. It has a sterling and proven drivetrain, is quite quick and can be fun when you are in the mood. It may not look exciting and it may not be built around the driver, but when you drive the car day in, day out you’ll really appreciate living with it. It’s like a wife... but not everybody is quite ready to get married yet.