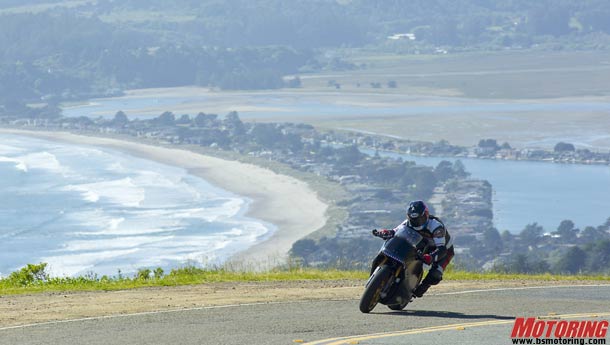 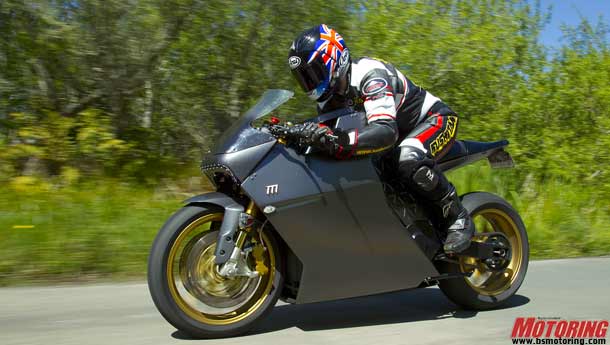 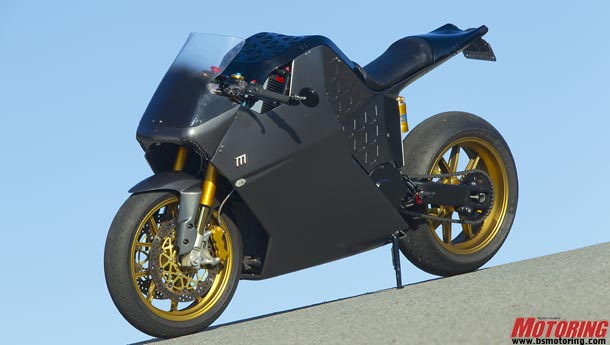 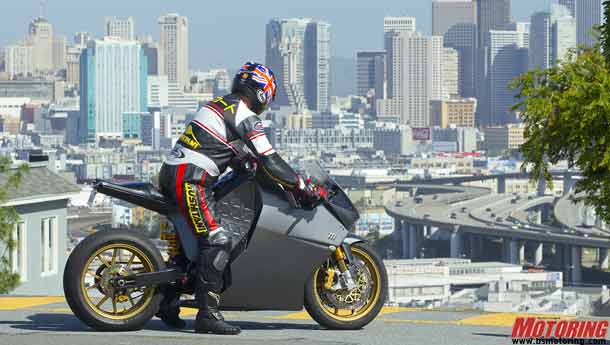 Like lots of things that are supposed to be good for you, the feel-good factor from riding an electric motorcycle on the street lies somewhere between cycling to work and starting a diet. You get a good dose of self-righteousness by helping Al Gore save the planet via such virtuous behaviour – but it’s not a whole lot of fun.

Riding an e-bike is especially underwhelming if you’re a sportsbike rider, craving the thrill of going fast to the background music of a high-performance engine’s throaty induction roar and purposeful exhaust note. Trying to convince yourself that the superior sound of speed is utter silence is mission impossible. Worthy, yes – thrilling, no. That’s where the Mission One e-Superbike produced by San Francisco, California’s Mission Motors/MM comes in, set to hit the marketplace in May 2011 at a hefty retail price of Rs 31 lakh + tax for the debut Premier Limited Edition version. That’s not exactly cheap – so what’s it get you, and why’s it any better?

What got me interested in finding that out was the sight of Mission One rider Jeremy Cleland in front of me at the Bonneville Salt Flats last September. He rocketed his prototype streetbike down the strip in a spray of salt to set a new AMA Electric speed record at 240.09 kph. In fact, Cleland had made a one-way pass at 257.6 kph the day before, but he couldn’t match that on the return owing to excessive wheelspin. Still, that was certainly fast enough to get my attention.

Mission Motors lives up to its name by its downtown location in a converted warehouse in the Dogpatch, a historic area of San Francisco’s noted Mission District. There, MM president Edward West and the company’s 15-strong workforce of EV missionaries have been toiling for the past couple of years on spreading the word, via the creation of what the record books say is the fastest street-legal pure-electric motorcycle in the world.

The Mission One’s streetbike styling is dynamically effective, after confirming along the US 101 freeway that Mission’s e-Superbike was still capable of the fantastic speeds it displayed at Bonneville. We turned back towards the coast and skirted Mount Tamalpais, heading for the Pacific Coast Highway and surfer hangout Stinson Beach. There, after hooking up the Mission One for a 90-minute recharge at the Sand Dollar restaurant, I did likewise via a plate of their excellent calamari and shrimp fry. My company was MM software engineer Seth LaForge aboard his Ducati 916 – many of the MM missionaries are active bikers.

OK – so what did that day of sunshine sportsbiking exactly prove? That the Mission One is a zero-emissions sportsbike that’s fun to ride and will outperform an R1 or RSV4 or 1198 off the mark, albeit without the agility of its lighter petrol-engined brethren. It’s a genuine high-performance motorcycle that’s completely different from the petrol-engined norm – and that applies to the soundtrack it delivers too. Because unlike other e-bikes, where the sound of silence eventually ends up detracting from the experience, the Mission One utters a muted but decidedly angry rasp when you get it on good – a sound that tells you you’re tearing up the tarmac with the awesome acceleration it delivers, fully worthy of a litre bike.

You need to tiptoe to climb aboard the tall single seat and encounter the decidedly sporty riding position, with your body stretched forward to reach out for the clip-ons attached to the

race quality 43 mm Öhlins forks. This does load up the front wheel at the cost of some weight on your arms and shoulders, but it’s on the acceptable side of tiring and, anyway, you can always tuck yourself in at speed. But your shoulders still get blasted, so this is arguably more of a high-performance naked roadster than a superbike. Also, it’s also all too easy to get your thumbs trapped quite painfully when making turns – the ’bars have been pulled back quite a long way to reduce the otherwise excessive reach to them, and badly need some bump stops.

Flick off the kill switch on the right clip-on and you’re ready to roll. Literally. Remember this is direct drive, so you can’t lock the Mission One in gear to stop it rolling down an incline, and instead must hold one of the brakes on. Now, just gently turn the ride-by-wire digital throttle – what else, on an electric bike?! – and you’ll roll forward, en route to a clean take off. But get too eager, or downright ham-fisted, and you’ll lay down a darkie from the rear tyre or, in the case of the slow-to-warm dual compound rear Michelin fitted, if you’re just getting under way for the first time, you’ll execute the beginnings of a rolling burnout instead. So long as you remember to steer straight, anyway!

Thanks to the fact that the Mission One’s meaty maximum torque of 15.9 kgm is available as soon as one rpm, this is the easiest bike yet invented to pull a wheelie on, even with no clutch to help you coax the front wheel to reach for the sky. And with little significant engine noise, you can stunt all day long around city streets where normally any excessively loud exhaust would have householders on the phone to the police. Not the Mission One: I should have got Edward West to sell tickets to the ladies who smilingly stood and watched me pop near-silent wheelies along the streets of San Francisco on this most civilised of hooligan bikes.

Out in the real world of no-compromise sportsbiking, there is literally nothing on the street with a spark plug that will out-accelerate the Mission One off the mark, once you

get used to modulating the throttle appropriately. No-thing. This literally awesome and definitely addictive performance off the line comes in spite of the bike’s pretty hefty all-up weight of 239 kg, split 53/47 per cent along the quite rangy 1455 mm wheelbase, but this weight distribution never changes since there’s no fuel to use up, which means the handling does remain constant. The dynamics of the bike feel good on the move – you do note the weight at rest, but on the go, the Mission One feels well balanced.

The digital speedo is easy to read, ditto the dash panel next to it telling you the single most vital fact you need to know – how many more miles of charge you have left in the drive battery. There’s also a secondary readout showing the remaining charge in the separate 12-volt batteries which drive the oil and water pumps, fans, lights and dashboard display. We still had 30 miles left on the main batteries after that 90-minute recharge at the Sand Dollar, so I’d go along with MM’s claim of a 70-90 mile range for the bike in spirited use – two hours would have been needed to fully recharge the batteries at lunch.

People get too excited about how much horsepower their bike puts out, swapping numbers like stockmarket traders as if that’s all that really matters in real world riding. Only it isn’t – what’s vastly more relevant is maximum torque and the shape of its delivery curve, because torque equals acceleration and that’s the forte of any e-bike, especially this one. The Mission One’s 136 bhp delivered at the output shaft at 6,500 rpm is quite useful – though only by 600 supersport standards, not litre bike! But until you come to terms with the quite different riding technique needed to get the most from such an alternative set of wheels, you’ll end up treating it as strictly a point ‘n’ squirt machine, whereas in fact, it’s more than that. There’s no need to worry about selecting the right gear for a turn, so you can focus on braking, picking a good line and feeding in the drive again just right on the way out. Those ISR six-pot callipers do a great job in hauling the Mission One down from speed and

even with all the kilos of weight in the batteries, there’s no undue weight transfer and it’s very stable stopping hard. No need to notch down a couple of gears to get the engine singing up high in the super power band, just twist – and fly!

There’s no getting away from it: the creation of the Mission One is a key step in the evolution of the sportsbike, in redefining the way we think about how we can go fast and have fun on two wheels in the uncertain future. Says MM’s CEO Jit Bhattacharya, ‘The principle behind the Mission One sportbike is actually similar to a company like Tesla’s – for so long, we have associated electric drive with sacrifice, with having to give something up by switching to electricity, so you get a heavier and slower vehicle whose primary value proposition to the customer is that it’s green. So the public needs to have its perceptions about electric drive changed and the best way to do this is to build something electric that blows their mind, that performs in a way they don’t think is possible, and that they can buy.’