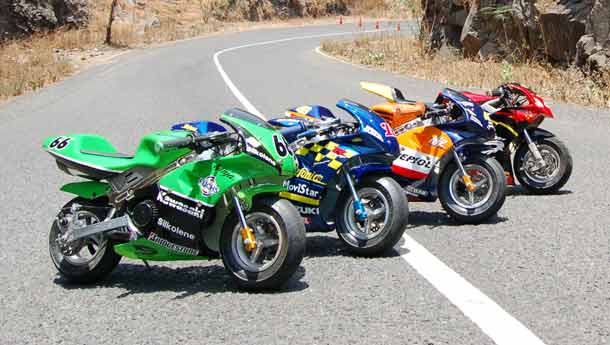 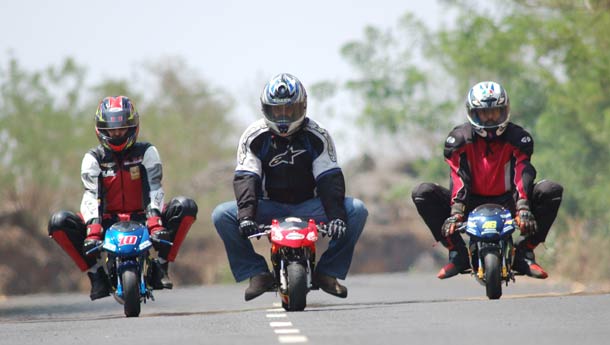 These motorcycles are fast alright, and terrifyingly loud (Sorry Pablo – his ears are still ringing) but we aren’t going to boast that BSM is the first magazine to put four race replicas back to back. We actually did, in a way of sorts, and I’m convinced that these motorcycles are definitely more fun. No, I haven’t gone bonkers and no, those aren’t litre class replicas. These motorcycles are the coolest pieces of machinery your not-so-big piggy bank can buy and they’re about as big as, umm, my first tricycle – I kid you not.

These four little monsters are part of Vivek Jaising’s collection –  if you recall, he also owns a GSX-R1000 (BSM April ‘06). We’ve been on his case about these minis for a while now and he finally gave in, for a price – that he be allowed to borrow Rossi’s autobiography from Shumi’s library. Agreed.

With the deal closed, I set out to pick up the motorcycles the night before. A Scorpio with the second row folded swallowed all four. Cones, a jerry can of premix and riding kit thrown in, the GP caravan was good to go. We drove to the outskirts of the city, to our favourite motorcycle road nicknamed the BSM Isle of Man, to unleash the little strokers in a morning of madness and mayhem. The stage was set: team BSM – Nandu and myself – taking on the privateer Vivek Jaising.

Vivek was riding an Aoli, an Italian branded Mini moto in red and black – a mean looking machine with an exotic trellis frame and race prepped bits. It even has its own race stand. Nandu hopped on the Kenny Roberts Jr Telefonica Suzuki GSV-R of 2004. And me? I naturally hogged the Repsol Honda complete with the 46 decal. As for the Kawasaki, let’s just say we let wild-card Alex Hoffman’s replica stay a wild card.
The Aoli is a 39.8cc, air-cooled stroker that puts out 4.5 bhp at a mind-spinning 14,000 rpm. Electronic ignition, dual discs up front, six and a half inch 90/60 tubeless racing slicks and with a specific output of 488 bhp/ton, this mini moto is top notch. Team BSM’s motorcycles bore similar specs, but weren’t run in. Brand new straight from the crate is what Vivek said. Don’t rev them to the limit. A plot to make sure we stayed behind him, I’m sure. They do worse things in racing, you know.   Let me give you a low-down on these bikes before we get on. Mini motos, like bigger crotch rockets, originated in Japan. Hi-tech engines in exotically  designed chassis were first built in Italy in the late 80’s, when pocket-rocket racing became a fad. There are basically two kinds of Mini motos - Mini motos and mini-Mini motos. Yes, they do get smaller than this, but don’t be fooled by their diminutive stance, these machines are scaled GP racing motorcycles – miniature works of art really. They even have an official championship called the Swiss Pocket Bike Championship held in Europe. It was first started when a pocket bike group decided to take on all other pocket bike owners in the country. The event has since evolved into one of the biggest Pocket bike championships in the world. A number of MotoGP champs started their careers aboard a pocket bike – yes, even Rossi did. He was Italian Pocketbike Champ twice before hitting it off with the bigger machines.

The suits have been zipped and the stands are off. The hand pulled starters are yanked and the little monstrosities ring-ding to life. Here’s where the flag drops and the bulls**t stops. Vivek is clean off the line, with Nandu in second. A slow start by Jossi (that’s me riding the Rossi replica) sees him in third. The first corner... well, I could go on and on but I’m going to tell you more about my riding experience.

You don’t have to swing a leg over these motorcycles, you have to squat on them. With your hands on the grips, feet on the pegs and your knees tucked in safely behind your ears, you’re now ready to go. Small doses of throttle opening have you waiting at the line. The centrifugal clutch disengages at about 7000 rpm or at very loud. And that’s when the bike just begins to crawl. One more wristful of twist and these little monsters are well into the powerband. Make no mistakes now, because these bikes are very unforgiving. You don’t want to whack the throttle open, it will flip you over and too much lean will dig your boot into the ground. Oh, and sudden steering inputs send you into a slapper. At 70 kph, that close to the ground with your knees beside your head, you want none of these as an option. And these machines can do a lot more. I’m not pushing it, remember.

I later decided to take a spin on Vivek’s already run-in moto to see how these motorcycles behave after they’re completely run-in. I’m sorry, they just don’t behave. The Aoli brings in the power a bit earlier than the replicas and then hits a second powerband way up in the revs, which is when things turn scary. Vivek’s clocked his little beast alongside his K6 at 80kph, and coming downhill it definitely feels much faster. Vivek assured me that the other motorcycles would equally scare the pants off me once they were fully run-in. No guesses as to who won the race, then. But Jossi will be back...

Vivek can help you source these mini monsters Visit  performanceracingstore.net,  his site , for more info