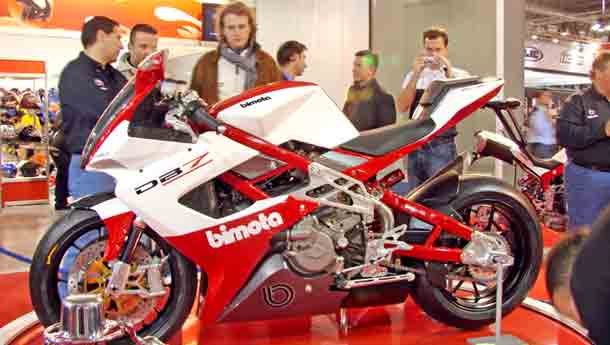 DB7TH HEAVEN
The latest Bimota superbike, the DB7, is stunning. And not just to look at. D is for Ducati, who have given the Rimini chaps the full-house 1098 motor. Rumours say the 180 bhp engine from the 1098R will also find a home in another DB7 variant. The motorcycle uses a trellis frame mated to a filigree-like aluminium section to great effect. The front is a narrow beak with stacked headlamps and gaping air intakes, while the pointy rear end is very Tesi 3D. While performance and output numbers are still to be revealed, carbon fibre in the fairing,rear section and everywhere else means the DB7 weighs only 170 kg, which should make it at least
as fast as it looks, if not faster.

World's superbike
The 1098R is the lightest, most powerful twin- cylinder Ducati has ever made. And significantly, this is the 1198cc machine that’s had the World Superbikes rules in an uproar. Troy Bayliss and Max Biaggi will be the riders. Do we hear knees knocking at the Japanese teams? A racing kit converts the R into a full on racer, including traction control equipped ECU, displayed via a straight-from Desmosedici dash. The new engine makes 180 bhp (6 more bhp in the race version) and 13.6 kgm which, frankly, is outright scary. The R is also about 4 kg lighter than the 1098, and sports the top of the line Ohlins and Brembo bits – 330 mm discs! What a machine! Ducati is pricing the bike at nearly three times that of an R1, so all that goodness is going to be expensive.

Hornet's next
Holy cow! The usual criticism of Honda being conservative with design is being rubbished by Big Red. That gorgeous thing is the new CB1000R, or the new litre-class Hornet. Like its little bro’, the big one gets the CBR1000RR motor, with tweaks. Hornet 600 styling evolves, but like the replacement of the F for R in the moniker, grows a touch more aggressive. The engine gets smaller throttle bodies than the ’Blade and the ignition and injection setups will aim for low- and mid-gusto. The aluminium backbone chassis is an evolution of the 2007 Hornet 600’s, but the rest of the aggregates appear to be of much higher quality. 310 mm discs and radial mount callipers are all present and accounted for. Just one thing bugs us – what happened with the CBR1000RR’s styling, then?

AUSTRIAN MISSILE
If you made the mistake of thinking that the coolest road-going twin in existence was the 1098, you’d be wrong. Meet the KTM RC8, finally out in full glory, flanked at the show by a parts catalog, all-carbon special and the superstock racer in Red Bull KTM colours. Distinctive, fresh styling (notice we’re not calling it pretty) hides an 1148cc V-twin that makes 155 bhp – more or less class par. Weight is 212 kg, but note that that’s wet weight, fully fuelled. KTM showed a superstock race version as well, and a World Superbikes entry is likely in 2009. That only leaves Aprilia’s V-twin still to be unveiled, mind.

CARBON HYPER
Aprilia’s FV2 concept is jaw-dropping in the flesh. Your eyes simply cannot take in the level of detail artistry that the bike sports. The engine is a new 1200cc V-twin based in the Shiver’s motor for the moment, and expect the WSB-spec motor finds its way into whatever comes out of the FV2 as a production machine. Aprilia say the FV2 has a by-wire throttle, ABS and the next cool-bit, traction control. Gaping exhausts, wildly illegal any place on Earth, are all right, since the FV2 is a concept. The chassis is almost all carbon fibre and doubles as an airbox. The wild suspension too is carbon fibre, and normalcy comes in the form of radial brakes. The rear has more CF in the swingarm, and uses a link-less monoshock. Aprilia are, so far, tightlipped about the FV2’s bigger picture, but they are known to explore some pretty wild ideas when it comes to motorcycles, so an off-scale production motorcycle won’t be all that much of a stretch of the imagination. Lucky for us, eh?

Duro Sport
Buying into the big supermotard craze is Aprilia, with its latest production model, the Dorsoduro SMV750. Based closely on the Shiver, the SMV’s target is the Ducati Hypermotard and that’s one of the reasons for the plethora of trick bits on the SMV - like the radial brakes, wave discs and so forth. The V-twin employed makes 95 bhp, which is just a bit more than the Ducati, and employs the by-wire system from the Shiver. Chassis is the usual trellis frame-aluminium combo and the rear swingarm is like the Shiver’s but with a cool split look. Detailed information will be revealed closer to the launch.

Trail breaking
The Moto Guzzi Stelvio, revealed at Milan and in the news for a while, is not the only European R1200GS challenger. Moto Morini pulled off a surprise with their Gran Passo, the third of the re-born Morinis. Using more or less the same base as the Corsaro, the Gran Passo uses slightly different chassis and body bits. The engine is the same 140 bhp 1197cc V-twin, although Morini say the motor offers better low rev behaviour and better fuel economy. The big chassis change is a new subframe for the new seat unit.

SINGLE AVAILABLE
The G450X officially became the smallest BMW motorcycle in Milan. The enduro racer is street legal, but boasts race ready bits and some innovative solutions to create a light, powerful enduro racer. BMW say the mass-centralised single cylinder weighs just 130 kg and will make more power than the competition. The promise is of 250cc-class handling, and power will come from a BMW developed, Kymco (Taiwan) built electric start engine. The frame is made of thin-walled stainless steel and the approximate wet weight is quoted as 130 kg. BMW also unveiled the new F650 and F800GS, both parallel twins, as well as updates to the R1200GS and the R1200GS Adventure.

CLASSIC STYLE
The sweet Breva 750 spawns a more nostalgic Guzzi, the Classic V7. 50 bhp should be friendly enough for newbies and the careful styling should make the Classic quite a hit. The motor in the double cradle frame is very much the older two-valver, which means lots of low end torque

LEADERSHIP SKILL
Honda’s old Lead was the Indian Dio, and the new one will be made in China – it isn’t coming to India anytime soon. The new fuel injected, liquid cooled motor displaces 108cc. The Lead has grown longer, but has slimmed down and the fuel tank is now under the footboard

MONSTER’S BALL
Ducati took the wraps off the new 969, a larger displacement entry-Monster, but with a mild styling tweak rather than a major change. The trellis frame is updated and a 696cc 90-degree two-valve engine makes 80 bhp and nearly 7 kgm of torque. Ducati has also given the Monster removable side panels, so that you can quickly change the colours of the machine. Brakes are full spec 320 mm Brembos

CHINESE SOUP
Husqvarna’s new SM610IE is 576cc single with street-friendly bits like electric start as well as race-ready bits like fully adjustable suspension. Weighing 142.5 kg, the bike sports 17-inch wheels. Husqvarna is planning to source components from South Asia for cost-effectiveness, and the engine’s Chinese made

BENELLI CONVERSATION
Benelli unwrapped the final spec BX449 Cross and the BX505 Enduro. The design and engineering is all in-house. The frame is an aluminium spar number with a removable CF engine mount. Benelli say mounts of differing rigidity will be offered for chassis tuning. The Enduro gets a 56cc-larger engine

VECTRIX THRUST
Vectrix’s Electric Superbike is a 200 kph capable, 204 kg missile. We’re not kidding. 12-second quarter miles are in the spec sheet, which is what current 600s manage with ease. Oh boy, this electric business is getting pretty serious.