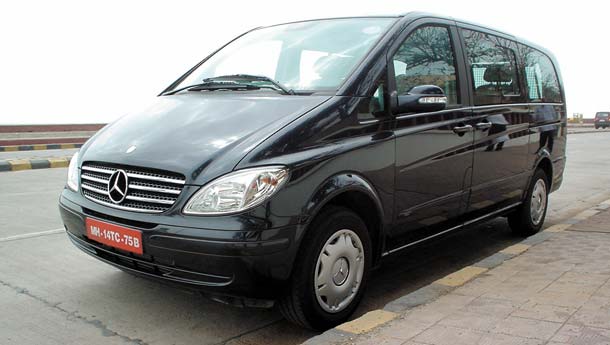 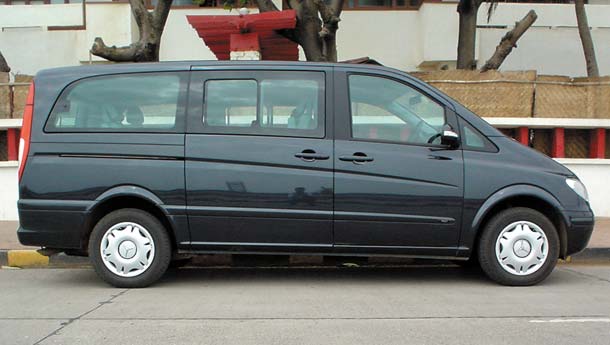 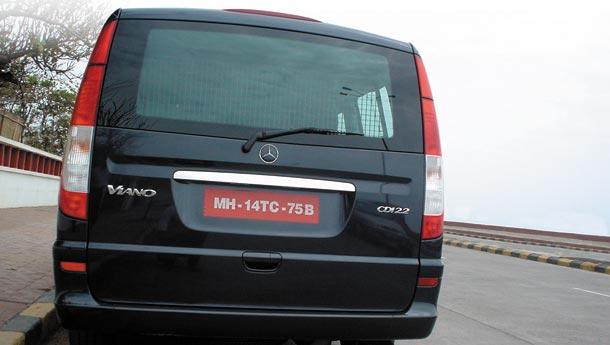 Does anybody remember the Mercedes-Benz MB100D and 140D? Those bread-boxes on wheels which were built like bread-boxes on wheels and yet carried the three-pointed star? Those two vans filled a niche in DaimlerChrysler’s Indian portfolio but did not deliver on the experience Mercedes-Benz vehicles usually promise – that’s because they were essentially badge-engineered Ssangyongs built in Korea.

Still, DaimlerChrysler tasted blood with the 100D and 140D in India, which opened up a new automobile segment in the country for them. A segment for which they now have a new, more capable, friendly, enjoyable and safe product – and it’s even built like a Mercedes. It’s the Viano, which made an international debut in 2001.

Currently, a long-wheelbase Viano 2.2 CDI is making its rounds in the country and is being shown to prospective customers for their opinions. Business Standard Motoring managed to scoop this possible new launch from DaimlerChrysler and we even have a driving impression for you.

DaimlerChrysler has been the most aggressive manufacturer in India to tap their international portfolio and introduce cars and engine variants at a rapid pace, thanks to their dedicated CBU (completely built-up unit) team. They are so aggressive that let alone run-of-the-mill Mercs, they had the chutzpah to launch the outrageous Maybach in the country. But for now, we’ll look at their newest offering, the Viano.

The manufacturer’s reasoning in introducing the van in India is that they don’t have an automobile in their existing line-up that can take entire families and their luggage on long tours. Besides there are other prospective customers like politicians, film stars, fleet owners and star hotels who could do with a large, luxurious van with a star on its grille. Since it will be a CBU import, the Viano is not cheap, at Rs 40 lakh or thereabouts. However if the response for the Viano in the country is good, then perhaps DaimlerChrysler may try assembling it at their plant in Pune, which will bring its price down by a whopping 50 per cent. So will the Viano make the grade in India? The only answer to that is to get closer to the vehicle and drive it.   You know what, it’s big. Actually, huge. No, it’s really humongous. The Viano comes in three body lengths, 4.75 metres, 4.99 metres and this, the 5.22 metre version – which makes it longer than even the long wheelbase version of the S-Class that’s sold here. And even though I am a hardcore Mercedes buff and thank God every night for allowing such wonderful automobiles to exist on Earth, I have to admit that the Viano is, um, er, hmm, how shall I put it... okay, here goes, one! two! three! not good looking. See, I didn’t use the word ugly, because according to me no Mercedes can be ugly (heh, heh).

The front grille pays homage to the M-Class while the headlamps jut out of the sides, like those on a Chrysler PT Cruiser, though not so dramatically, thankfully. The tall taillamps reminded me of those on an Indica, and those deep slashes on the sides hardly help in removing the fatigue of having to see such large glass and sheet metal surfaces. Yet, the Viano attracts attention, but let me admit, not everybody’s. All heads usually turn when they see an unusual Merc, but here it looked like only Sumo, Qualis and other van drivers were checking it out. Size envy? Or the realisation that it could mean a loss of potential high net worth business?

But the Viano more than makes up for its looks, or the lack of it, in the drivetrain and interior departments (amazingly versatile, but I’ll come to that later). Which is what actually matters in a category like this. Nestling somehow under that short hood is a second generation common rail turbocharged diesel engine that we are all to familiar with, in the C 220 and the now-withdrawn E 220 (two variants of V6 petrol engines are also available as options). The 2148cc four-cylinder unit in this CBU model develops 150 bhp at 3800 rpm and a delicious 33.3 kgm of torque that arrives as early as 1800 revs. And that redeems this rather ungainly Merc’s existence. Mated to this unit is a five-speed automatic gearbox with Manumatic. The stubby gearlever is placed on the dash, like most MPVs nowadays that liberate space in the front. The entire switchgear is borrowed from the common Mercedes parts bin, only the layout of the facia is quite different from what you usually see when you’re in the driver’s seat of a Merc saloon.

Shift into D and let go. The Viano feels like driving one of those vestibule buses – not that I have driven one, but the sensation is like that. That’s because you can actually feel the rest of the Viano catching up long after the front end has moved ahead. It is so long that if you look into the rear view mirror, the passenger in the furthermost seat looks like a speck in the distance. Despite that, the Viano is easy to drive. The steering is over-servoed to make it convenient to handle the bulk and its turning radius is surprisingly short too. As it is also quite heavy, tipping the scales at over 2,000 kg, you appreciate the easy availability of torque on tap.   The torque makes it a breeze to drive on city streets. Not just that, even with a packed family and the proverbial kitchen sink, this vehicle can effortlessly cruise highways too. You are instantly comfortable in the captain’s chair, with its high position and good visibility, and you feel like you could do endless kilometres without showing signs of fatigue. This is where the development of the CDI engine makes itself
clear. I feel that the first bunch of CDI motors were not up to Mercedes standards when it came to refinement, but these second-generation units are smooth and you can barely feel any vibes or noise intruding into the cabin. Which means you can crunch distances in the Viano effortlessly. Yeah, yeah, that’s the one... miles to go before I sleep and all that jazz.

But what about your passengers? No problem. This version had four individual seats with independent backrests and armrests and could be folded or moved up and down or even removed to make the space you want. Surprisingly, people with above average height might not be able to lounge and stretch their feet in case of a full house. There are innumerable cupholders, two fold-out tables, individual aircon settings, a refrigerated box and what have you. The Viano comes with a host of interior options which you can customise based on your needs. There’s even a camper version like the ones you see on ancient Volkswagen Microbuses and Transporters. In fact, there are so many interior options that I recommend you pester your neighbourhood Mercedes-Benz dealer for a brochure or simply log on to the Mercedes website.

But what the website won’t tell you is how the passengers really feel sitting in the back. Though the Viano wallows a bit – I suppose it’s only to be expected in a plush van – it’s not too pronounced and is quite acceptable. With an independent suspension setup all around and wearing Goodyear Marathon 205/65 16-inch tubeless tyres, the Viano rides surprisingly well for a vehicle in this category – look at it this way, motion sickness may not be something you need to contend with on long journeys. It’s soft without being too bouncy and the ride is firm without being harsh. Sounds too ideal? Well, you can do better – if you really want it to iron out all the potholes, there’s always the Airmatic air suspension option with automatic self-levelling.

So what do you think? Looks interesting? Want to take your joint family out in comfort and safety? This is all you need, provided you have the money. For those who can’t afford it, cross your fingers and hope that there’s sufficient demand for it to get into production. You can start petitioning DaimlerChrysler India right away. Better still, get yourself a new SLK and leave the family behind.