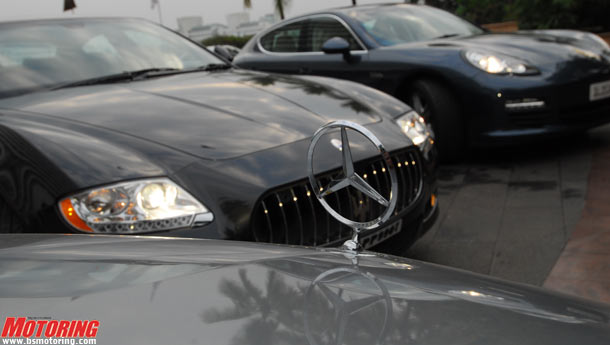 German luxury car maker Mercedes Benz would unveil its compact range in the Indian market by the end of 2012, a top company official said today.

The cars with left-hand-drive option would be introduced globally later this year in Europe and in India by 2012-end, Mercedes Benz India MD and CEO Peter Honegg told reporters here.

"Initially, cars with Left Hand Drive option, manufactured at our facilities in Germany and Hungary, will be introduced in Europe later this year. We plan to bring them to India by 2012-13 as Completely Knocked Down (CKD) units," he said, but declined to state its price.

"Right now we don't have the facility to manufacture the compact class at our Chakan facility near Pune,"  he said.

Currently, Mercedes Benz India manufactures the C, S and E class at their facility in Chakan near Pune.

On the outlook for this year, he said they would clock over 7,000 units in sales compared to last year's 5,800 units.

On sale of its Actros buses he said they have set a target of about 130-140 buses this year compared to 70 last year. He said financing options for Mercedes Benz buses would also be covered later this year under the parent company's financial services division.

Honegg said there are 30 dealers all over India and would seek to strengthen their presence in cities like Delhi, Mumbai and Chennai.

"We expect both cars and truck financing to contribute 50 per cent in this services," he said.

While Mercedes Benz Financial would handle the financing options for cars, Daimler Financial Services would also handle financing of its commercial vehicle Bharat Benz, to be rolled out from the Oragadam factory near Chennai next year.

On leasing of Mercedes Benz cars, Honegg said they would initially target public listed companies and then on private owners."India is very new market. We want to try first in stock market listed companies.After that we will focus on others. About 30 per cent of vehicles are leased today."

Daimler Group had earlier today formally launched its financial services division at an investment of $50 million. It aims to generate volume of $500 million. Currently, Daimler Financial Services operates in 40 countries with a contract volume of Euro 63.7 billion.