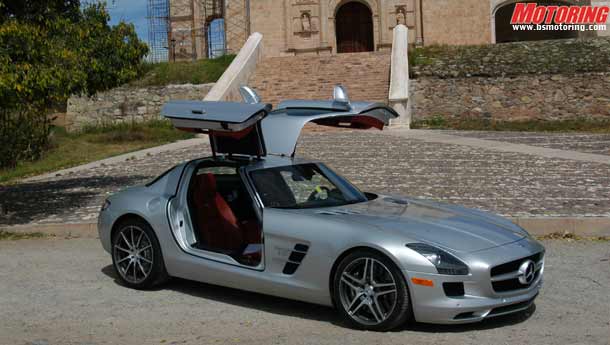 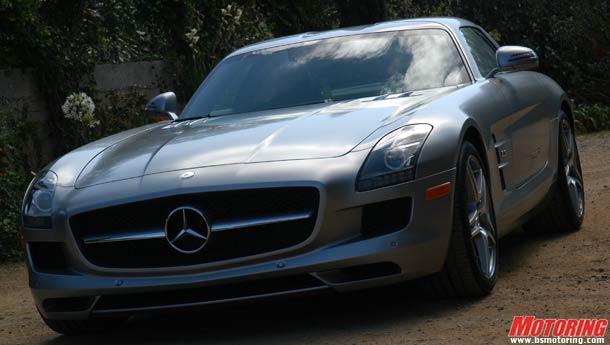 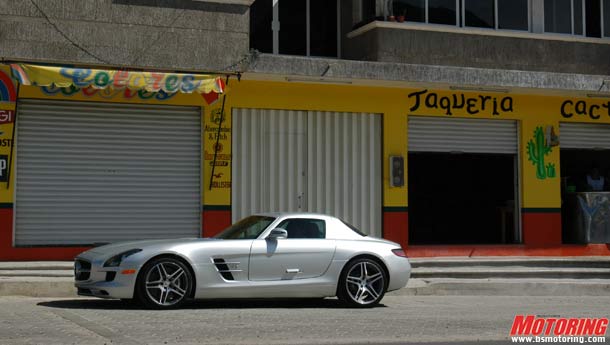 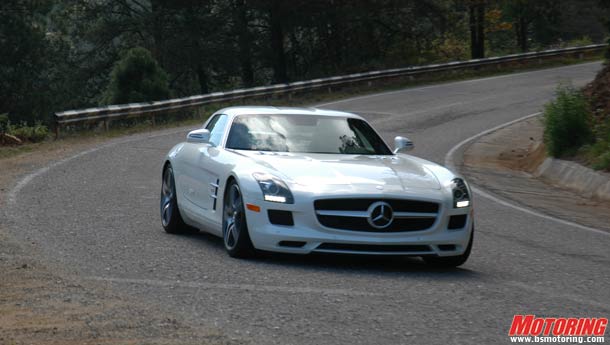 Well, what comes to your mind when you hear someone say Mexico? Many of my friends answered ‘tequila,’ a reasonable number — mostly women — said Antonio Banderas and there were other one-off answers like ‘big hats,’ the Aztec civilisation and the ‘Hand of God’ (the last one referring to the goal scored by Maradona at the World Cup in Mexico). Needless to say, I was disappointed — because for me, Mexico meant all of the above plus the black-and-white imagery of racing cars participating in the legendary Panamericana road race. Those were the days when cars were built strong and were driven by people who sought bigger thrills than shooting down enemy planes. And Panamericana was in the same league as Le Mans, if not bigger. No, I was not even born then, but as an enthusiast motoring scribe you couldn’t avoid features, mentions and sepia images that formed the proof. So, when the call came from Mercedes-Benz India inviting us for the SLS AMG media drive in Mexico, I did everything short of planting what could have been an embarrassing kiss on the handset.


To cut a long one short, the 30 hours spent on aircraft and airports proved to be worth every second. This was indeed a massive logistic exercise meant to provide sheer driving pleasure to a bunch of journalists from around the world — nothing more, nothing else. We were whisked away from Mexico City in a van to Puebla, a sleepy little town in the lap of an active volcano and put up in a hotel converted from a colonial era convent. The next morning we were handed the 500 bhp-plus supercars and told to reach Oxaca. No sat-nav system, no fixed times and no kill-joy pace cars. And then there was the small matter of five or six cops driving Dodge SRT-10s to clear traffic and to generally egg us on so that we could dance at speeds above 250 kph! Can it get more surreal than this? The cactus country for a backdrop with the occasional volcano, a sweeping road that was penned by God himself and fast moving police cars playing catch up with supercars as if it was a game of Grand Theft Auto.

There is only one question that the Mercedes-Benz SLS AMG needs to answer. Can she battle the Ferraris, Porsches and Lamborghinis in Europe and the Corvette ZR-1s in the States? On paper, she’s got the hardware to do that, but we had to spend some quality time with her to find the answer.   Does it have the looks to raise eyebrows in Italian towns?

Modern Ferraris, say the 458 Italia, or the Lamborghini Gallardo are not retrospective design jobs. They have retained the mid-engined layout and represent modern thinking and technology. That way, the SLS AMG is quite different — the first-ever car to be totally conceived and executed by AMG had to pay homage to the original SL of the 1950s and why not? The original, nicknamed ‘gull-wing’ for the way the doors opened is too definitive a sportscar from the illustrious history of the three-pointed star and one that deserved a new interpretation. Remember, recently Lamborghini tried a concept Miura that aped the original only to get a lot of flak from everyone who saw it — but the SLS looks the part.

It has captured the lazy elegance, the sporty intent and the ‘gull-wing’ spectacle to full effect. For me the most redeeming fact of the design is the long nose of the car — like the E-Type Jaguars and not so like the classic SL, but lending absolute supremacy to the proceedings.

The car can mingle with traffic well, especially when painted in white or silver. But the red examples that came for the test drive programme looked even more mean and low-slung than others. Sure, it can carry off the silver paint job well and that ought to be the default choice for anything that apes the rally- and race-going Silver Arrow SLs. Even the Aztec gods who saw these cars slither around stunningly beautiful towns such as Puebla and Oxaca would have been impressed by the amount of detailing that has gone into the SLS. The aluminium gas filler cap, the chrome-gilled air intakes on the bonnet and flanks and the gentle boat-tail wrapping of the tail, all go on to make the car special. This is a great car to make an appearance in… gently roll in, with a few crackles from the exhaust, stop at the porch and let the doors open heavenwards — trust a thousand eyeballs and all the flash bulbs go crazy on you.

And yes, the SLS is a text book on wheels when it comes to aerodynamics and cutting wind is important for a car that is quicker than some supersonic jets up to 100 kph from standstill.   Can the interior match the exterior flair?

For what is essentially a passionate design that borders the impractical, getting into the car through these extravagant pieces of doors is easy — though you may face a problem when it is time to pull it shut. Similarly, there is no graceful way to exit this car — and tough luck for ladies who choose to wear skirts for their SLS experience. But once you settle in, this strict two-seater car is beyond comparison when it comes to cocoon-like coziness. The seats can be adjusted in a variety of fashions to suit drivers ranging from supermodel-material ladies to the oil tycoon who regularly neglects his gym lessons. Inspired by aircraft technology and design, you see the total functionality theme blending well with the important touch of luxury in the interior of the SLS. The thoroughly contemporary instrument cluster is easy to read and comprehensive in giving information that you don’t necessarily need in a super sportscar. A large transmission tunnel divides the driver and the passenger compartments clearly. While black over silver looked classy, the test car that I was driving had red upholstery that the above-mentioned oil tycoon might just prefer. Visibility from the driver’s seat is excellent for a supercar and that includes the one through the rear-view mirror mounted on the windshield. The SLS, have no doubt, pampers the driver and the passenger more than the Italians — though the Corvette offers similar space if not quality.

Like the original, the new SLS AMG is a front-engined, rear-wheel driven car. The big difference is the ability of this engine to generate enough power that, in an ideal world, could have powered a few villages without electricity. Thumb the start button and the hand-built V8 wakes up to a rumble of an idle. Flooring the pedal results in sharp barks with glorious intermittent crackle. Engage drive the same way you would do in any automatic and the SLS AMG lurches forward with the energy that belies its overall mass. The sense of occasion and drama built by the gull-wing doors and the meaty exhaust note is translated to a 0-100 kph run in just 3.8 seconds when launched in the Race Start mode. If this acceleration process is interrupted by say a slow moving truck, the engine will downshift along with your braking input accompanied by more crackle.   A process worth experiencing many times. The big V8 displaces 6208cc to produce 571 bhp at 6800 rpm and churns out over 65 kgm of torque at 4750 rpm. An all-new double-clutch automatic gearbox with seven speeds ensures that power is deployed in an efficient and safe manner. Of course, the three-stage traction control system and other electronic aids along with stupendous aerodynamic research help you keep things the right side up. The big difference here, compared to all-wheel driven supercars such as the R8, Gallardo and the 911 Turbo is that you feel as if you’re being pushed rather than being pulled along — a seat-of-the-pants sensation that is purely exhilarating. I have not driven the 500 bhp BMW M5 yet, but I would expect the SLS experience to be similar though the super sedan is not in this league. With the powertrain set in Sport Plus mode, the car changes character and starts sounding and reacting in an even meaner and aggressive way. But, and this is a big but, you don’t ever consider the SLS to be a threat the way the Gallardo is or to a lesser extent the 911 Turbo is. Instead it makes you drive like a hero — one without the Steve McQueen worry-lines.

This test drive will remain in my memory forever for being the fastest that I have driven on public roads for the longest stretches of time — what with police escort and all! Honestly, the roads were not exactly autobahn material and there were deceivingly undulating stretches that challenged the dynamics of this seriously fast automobile. Yet, all that added to the challenge — the car, the road, the weather and the backdrops formed the ingredients of a 70mm movie that I can rewind and play in my mindscape as and when required. The order book for the SLS has already opened and the response is good for a car that is yet to be officially launched in India. When it goes on sale, the SLS will cost close to Rs 2 crore on the road — but hey, supercars are not supercars unless they cost a bit, right? But lucky are those souls who have already put their names on the SLS order book. For they will be getting a car that can provide maximum automotive thrills this side of a single-seat racer repeatedly, for days, months, years like a precision German clock. I know there is no expression like that, but you get the idea.