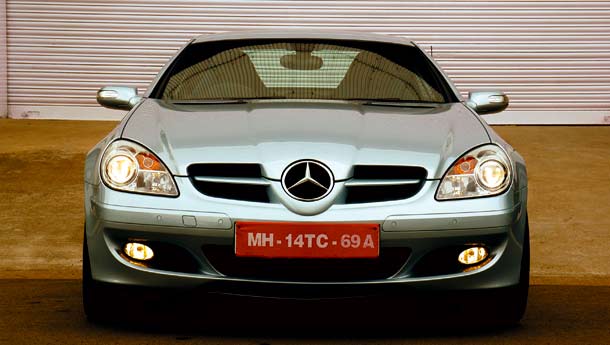 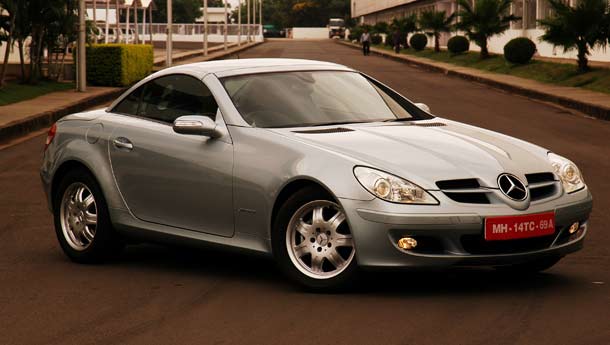 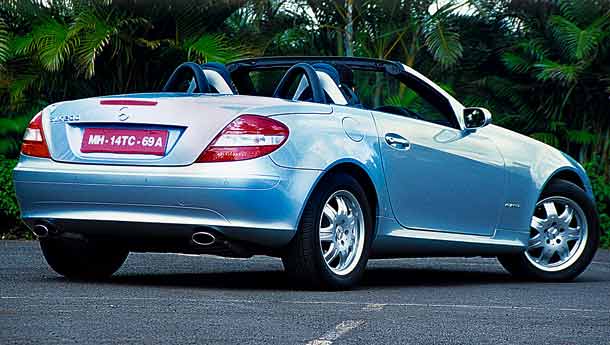 I have a rather large pan shot of the previous generation SLK at my workplace. I had cut it out from an ancient Mercedes calendar I purloined from somewhere even before I joined Motoring . Prophetically, it shows a woman driving it. Ever since it was launched in 1996, the SLK was considered an effeminate roadster, and its only talking point was the 25-second foldaway roof. This time around, the highlight of the new SLK is more than the roof – though it’s quicker by three seconds now. The new SLK is now seen as more macho and yes guys, tough, macho dudes like me can be seen driving it.

If you remember, we had scooped the imminent launch of the new SLK in India in our August issue. And now, in barely three months, I am driving it. The first impression confirms that Mercedes has seriously attempted to make it more butch and even more engaging to drive. For instance, the steering – rack and pinion over the earlier recirculating ball setup – calls for muscles at lower speeds, meaning more effort and involvement. And the three-spoke wheel is man’s grip thick too. Besides, it’s bigger than the preceding model across all aspects – wheelbase, length, width, height – by a few inches. Then of course, there is the most important ‘masculine’ aspect: that nose.

You know, when Mercedes unveiled the new SLK in March this year, its looks were nothing new. In fact, there were no raised eyebrows when it debuted with that F1-inspired front-end. That’s because we knew the Vision SLA concept doing the de rigeur motorshow rounds would end up, nose job and all, as the next SLK replacement. Still, the new SLK’s appearance was panned by critics. Top Gear  described its front end as pretentious,while Robert Cumberford, the design expert at Automobile magazine, commented in their June issue that the new SLK ‘already needs a facelift’! That’s kind of harsh, actually.Harsh because the photos don’t do justice to the roadster in real life.   Sitting smug in front of me, in a brilliant new shade of the classic Merc silver, the SLK looks purposeful. At some angles, it looks like the committee of designers at Mercedes have borrowed some cues from BMW design chief Chris Bangle’s flame surfacing technique and, well, discreetly flame-surfaced the car – note the delicate lightcatcher running from the headlamp to the taillamp. What’s more, the SLK sits squat and planted thanks to prominent wheel arches and the neat seven-spoke alloys and chubby 205/55 16-inch Michelin rubber filling them up comprehensively... they’re virtually jutting out. A cute, well-rounded bum with large taillamps, er, rounds off the whole package. Which brings me back to the nose. Hmm... do I like it or do I like it? Tough choice, really.

Inside however, I was disappointed. Though the instrument nacelle, with two pods, one for the speedo and the other for the tacho, turned towards you look neat, the rest of the buttons, dials and controls look tacky. They look like they are made of plastic and have been painted using the silver-grey you would see in Chinese toys to indicate it’s metal. In fact, that could indeed be the case. The nicest thing I can say is that the switchgear is at least new, as Mercedes usually raids little parts from their other models.

Notice that ‘but...’ in the intro? It’s obviously there for a reason. DaimlerChrysler India, as we had stated in our August issue but hoped against, has given us the entry level SLK. We had optimistically wished they would introduce the SLK55 AMG (heh, heh) or at least the V6-engined SLK 350, but instead we have the SLK 200 Kompressor. Displacing 1796cc, this four-cylinder petrol powerplant is intercooled and supercharged, developing 163 bhp at 5500 rpm and 24.3 kgm of turning force at 3000 revs. The previous SLK sold in the country was a proper 200 bhp 230 K, an engine which I think has been discontinued in Mercedes cars worldwide.   Not that the 200 K is a bad deal; if it can propel the heavier C-Class decently, a lighter roadster should pose no problem. The surge you get when you depress the right pedal is quite heady all right, but it only indicates what a more powerful engine than this one can evoke. My only issue is that Mercedes developed the high-tech body shell and the advanced dynamic chassis of the SLK knowing fully well that a 360 bhp V8 was going to be plonked inside the engine bay. So it’s kind of an overkill, isn’t it? But DaimlerChrysler India is not going to stop you from ordering an SLK 350 from them, right?

The 200 K comes with a five-speed automatic transmission (the six-speed manual is an option) that’s been designed to make the shifts quicker, but then you also have the Touchshift option – of nudging the well-designed gear lever to the right or left to shift manually – and paddle-shift too. Press a button and you can use the discreetly-placed paddles below the steering wheel to do the shifting, just like Kimi or David. The last paddle-shift car I drove was the Alfa Romeo 147, and compared to that, the SLK’s shifter is more advanced and refined. It’s that much more seamless, less clunky and has a rapid feel to it. Mercedes claims that with the auto-box, it can attain 100 kph in 8.3 seconds and a top speed of 226 kph. We will however test it soon and see what it can do in real life.

The last generation SLK was quite nimble and skittish. It felt lighter and would hunker down only when it was doing speeds. No such thing here. The new SLK is firmly planted in terra firma and is composed even on three-digit speeds. The reason for that, as you’d have guessed, is new suspension gear on offer. At the front is a three-link McPherson suspension with the usual gas-filled dampers, coil springs and anti-roll bar setup, while a multi-link unit at rear, assisted by gas dampers, coil springs, anti-roll bar and anti-dive/squat bits do duty here.

Overall, the new SLK is a desirable vehicle to have, especially if you want an SL 500 and couldn’t afford that . With the top down, it’s a brilliant feeling to drive, and with the top up, it feels extremely secure and solid, as if it’s a proper coupe. Hats off, or should we say roofs off, to Mercedes engineers who have made this happen. The SLK is strictly a two-seater and therezs no room even for an excuse. So obviously if you can afford the Rs 45-odd lakh for it, you have an S 350 parked in your garage for the weekend.

Let me also tell you that if you look out for more photographs of the new SLK released by DaimlerChrysler, it will be difficult to spot one showing a woman driving it. Get yourself one, you lucky dude, you da maan.