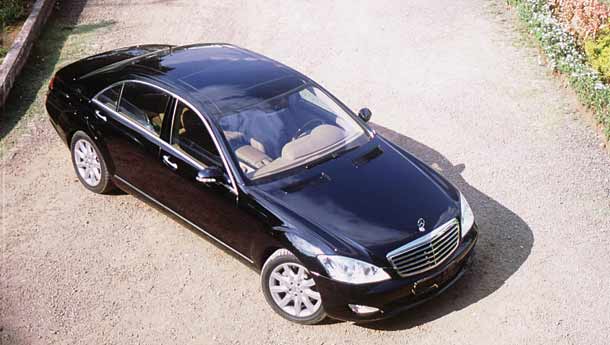 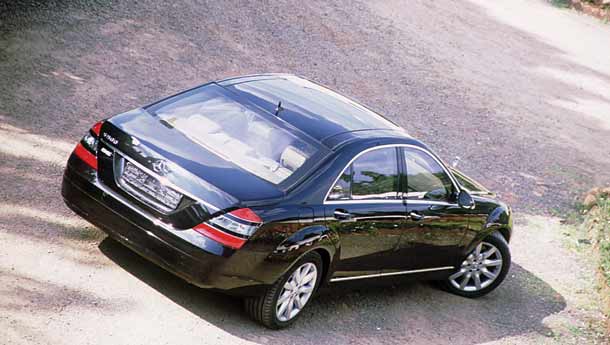 Where’s the arrogance? And where’s that politically incorrect automobile that gives a damn that it empties oil reserves in a great hurry? Where is that car that looks as if it tramples workers’ rights under its thick rubber so that its capitalist owner can commute in sybaritic pleasure? Where is that machine hewn out of solid steel that looks as if it could stop speeding bullets in their tracks? Well, wherever it is, Mercedes-Benz don’t make them no more.

In front of me is a very, very new S-Class – the first one to land on Indian shores. It’s so new – barely a month old after its debut at Frankfurt in September – that it would still be a rare sight in Germany. And not even most DaimlerChrysler India employees have seen it, let alone come near it. Well, to tell you the truth, it’s not meant for sale in India. It’s a left-hand drive version that has to go back to Dubai. You see, DC, as in Dilip Chhabria, is going to stretch it by about 25 cm, give it all the extra creature comforts inside and is going to exhibit it at the forthcoming Dubai Motor Show. But that shouldn’t stop us from giving you an idea of what the new best car in the world is all about, right?

To me, this new S-Class’ grandfather, the W140, was the complete capitalistic tool with imperialistic tendencies, as the commies would put it. It defined what the S was all about. It reeked of old wealth, it stood for solid engineering, and was a super-indulgence in the nervous nineties. Then came the W220, a dramatic departure from whatever the W140 stood for – it was politically correct, was lighter, sipped fuel, boasted cutting-edge technology, and horror of horrors, even had a few curves here and there. I was shocked, but when I drove it, I was mesmerised. Here was a massive car that actually shrunk around you, crunched distances with remarkable ease and pampered you like a 5-star hotel on wheels, with the masseur also thrown in.

To me, it looks like the folks at DaimlerChrysler have taken the threat from fellow Germans Audi and BMW seriously, to create an all-new benchmark in the luxury car class. This is despite the fact that the S-Class is the undisputed leader in its category across the world – outselling comparable models from BMW, Audi, Jaguar and Lexus. Put together. I have driven the Audi A8, and thought the attention to detail and quality, and the styling was simply awesome. Recently, I also drove the BMW 740Li and was taken in by the focus towards making it a driver’s luxury machine and its in-your-face appearance. Now, it’s time for the W221 – Mercedes’ attempt to ‘move the goalposts’ as the management consultants put it.

And I am shocked again. Mainly because the S-Class has become younger. It looks more at home at a warm Italian restaurant than at a banana republic dictator’s parking lot. It’s the kind of car now in which you’ll won’t feel under-dressed if you’re wearing anything less than a Canali three-piece suit. And seen in black, the S 500 in front of me looked smaller than it actually is – it’s longer, wider and taller than the W220. Anyway, as regards its overall looks, you have a design expert giving his views, so we’ll check out the rest of the car. Oh, but that boot! For heaven’s sake, somebody shut this one too. And look at that antenna – doesn’t it also look like a BMW rip-off?

Inside, it retains the typical S-Class layout, a vast expanse of wood, leather and high quality plastic attending to the driver’s whims and fancies. Only this time around, the Comand (Cockpit Management and Data) system – Mercedes’ version of Audi’s MMI and BMW’s iDrive – has cleaned the insides of the S-Class up of all the numerous switches and buttons that are usually scattered about. Well, not exactly, as there are still over 150 buttons inside to play around with! Except for the incongruous square analogue dash clock, you know this car is full of high-tech stuff hidden beneath a veneer of well, wood veneer. The buttons on the multi-function steering wheel have been organised into what looks like two game pads – somehow, they are quite intuitive for somebody like me who associates gaming with the Commodore 64. But the piece de resistance is the instrument display. The speedo takes pride of place, and though it looks like a real analogue counter, it’s actually a display on an LCD screen. The idea being that when something goes wrong, the car’s central Cray XMP or its equivalent can flash warning signals at you (Achtung! Achtung! Ze Zpitfires are komming!) instead of showing you something mundane like the speed. Not bad, actually – mark my words, everybody from Audi to Lexus is going to copy this neat little trick.   If you notice what’s happening with Mercedes nomenclature these days, an S 500 does not mean a 5000cc engine. Instead, behind those Mondeo-like headlamps and the radar (yes!) behind the grille, is a 5461cc V8 – yet it’s not called the S 550. The specs are pretty impressive. This new four valve per cylinder powerplant develops 380 bhp at 6000 revs and a strong 53 kgm that comes in from a low 2800 rpm. This lightweight motor, which uses an aluminium crankcase and low-friction alloy cylinder liners among other innovations, features variably adjustable intake and exhaust camshafts which make the engine run smoother while offering better torque. As expected, Mercedes’ smashing 7G-Tronic gearbox is paired to this new engine, and between them, do a fine job of propelling this behemoth...

At this moment, let me confess. I couldn’t get a chance to drive this machine on proper roads, and in the way it deserved to be driven. It was either a short spin or nothing at all. I obviously opted for the former – and wrote this piece. I hope you’ll understand. For me, any Mercedes is a celebration, so even if I couldn’t test it and evaluate it fully, I just consider myself awesomely lucky to experience even this much. And when it’s likely to be the next best car in the world, I had to be the first to tell you about it. Which means it’s only when the official right-hand drive versions are ready for sale in India, that we can give you a full test, including a proper evaluation of its ride and handling qualities – which even now, I can say, is about as sublime as it gets.

In the short spin I had, I was amazed by the supreme refinement of this powerplant. It felt like butter that’s been kept out of the refrigerator for some time, so smooth that you’d mistake it for one of those battery-run electric motors. Thanks to the seven-speed autobox and the overall bulk, there is an initial hesitation to get out of its inertia. But that’s just momentary. And that’s the past. Because this monster can move. And when it does that, your eyes widen with the knowledge that there are vast, not-so-hidden reserves of power waiting for you to tap. I grit my teeth, not today, but soon. The surge from the rear wheels to me seemed virtually instantaneous every time I played with the throttle, but that clever 7G-Tronic was orchestrating the whole performance, sensing the driving situation. Which means that if you want your S 500 to match the bandwalas at a marriage procession, it will do that just as well as setting new long distance records on the highway. Mercedes claims that this long wheelbase S 500 can attain the 100 kph mark in 5.4 seconds, and that top speed (yes, yes, we’ve heard it before) has been electronically limited to 250 kph.

By the way, like in the 7 Series (take a bow, BMW, for again showing the way), there is no gear lever in the conventional place, thereby liberating space for storage and for the handy Comand dial. Instead you have a stalk mounted on the steering column – a 21st century column shifter, if you please – that does duty. It’s quite intuitive, though pushing it up or down feels like you’re activating some ghost wipers. I think, thanks to its wonderfully versatile drivetrain, the S 500 will be Mercedes’ best-seller across the world – and not even the yet-to-be launched S 320 CDI will be this popular.

The S 500 is quite nimble, which goes well with its new-age sporty appearance and does not feel like a massive sedan – which it actually is. With a prominent positive camber on the front wheels, Mercedes has ensured that the turning circle is as small as it can get. I drove over some rough patches and was frankly not surprised the way the S handled it. A 7 Series or an A8 wouldn’t have sailed through as beautifully as the S-Class did. Even its predecessor had this exemplary quality about it, but Mercedes went ahead and improved upon their Airmatic air suspension in the new model to make it quieter and smoother. The setup is the same, four-link at the front, multi-link at the rear, supported by pneumatic springs all round. Yes, it’s adaptive, and is supposed to hunker down when it touches 120 kph when in Sport mode. But I see most S-Class users setting their preference to the Comfort mode.

As expected, the S-Class features a host of technological advances, which makes it safer and more comfortable than the outgoing (outgone?) model. Adaptive brake system, Brake Assist Plus with radar which does the thinking for you, Distronic Plus that maintains a safe distance, an electric parking brake (a la Audi and BMW), infrared technology based night vision, Pre-Safe (where the car senses a crash and literally tightens up its act) and even an amazingly useful reversing camera... these are just few of the safety features. As regards the comfort features, forget it, the list is too long. It’s a very comfortable car, take my word for it. And as regards my earlier outburst regarding the lack of arrogance, it’s okay, Mercedes. All is forgiven.