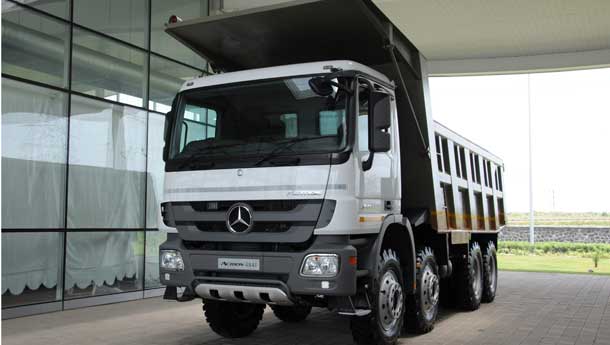 For Mercedes-Benz, there is more to the Indian automobile market than just luxury cars. Along with Daimler India Commercial Vehicles, it is now looking to grow its share in the premium commercial vehicle market, which Volvo has ruled unchallenged for a while. Mercedes is not a newcomer to the Indian commercial vehicle market, having launched its Actros trucks and Mercedes-Benz buses in September 2008. The company has sold 580 trucks and 25 buses so far.

Analysts say Mercedes has got the timing right. The economy is emerging out of the slowdown and demand for trucks from the infrastructure sector is projected to be robust in the days to come. Sale of heavy commercial vehicles has rebounded after several months.

Mercedes-Benz’s head of sales and marketing (trucks), Dinesh Jain, plans to focus on specialised segments such as mining (the bulk of Actros trucks have been sold to operators in this sector), irrigation (where the company supplies to contractors in Andhra Pradesh) and special applications such as fire browsing. Jain also has on his target hydro-power projects and project carriers which haul heavy machinery such as nuclear reactors. These sectors require high power and torque and Mercedes claims it has the highest horsepower trucks in the industry.

PricewaterhouseCoopers Partner Abdul Majeed believes the market for heavy commercial vehicles holds great potential. “Earlier, 7- to 12-tonne trucks would do well in the market. But with increasing infrastructure needs, the demand for higher tonnage vehicles will only rise,” says he.

The Mercedes trucks are priced at around Rs 67 lakh on an average. The final price, of course, is fixed after consultations with customers. Jain says the premium helps the company get better profit margins. The commercial vehicles business of Mercedes-Benz, he adds, has been profitable from day one.

For buses, the company can take heart from the huge orders being placed by cities under the Jawaharlal Nehru National Urban Renewal Mission as well as road transport corporations of various states. Already, the company has sold buses to Maharashtra, Karnataka and Greater Mumbai.

It wants to raise the contribution of commercial vehicles to its sale revenue from the current 15 per cent. To make that happen, Mercedes-Benz will introduce a range of new vehicles such as long-haul trucks, city buses, triple-axle intercity coaches and over-dimensional-cargo vehicles.