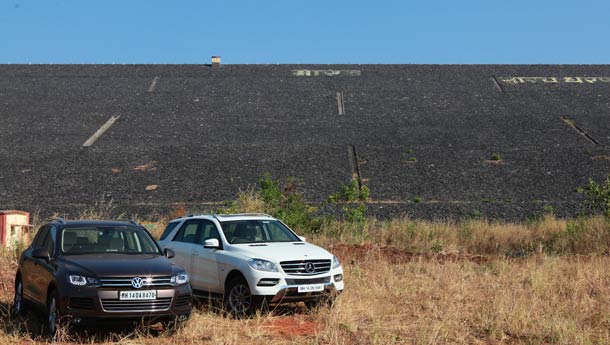 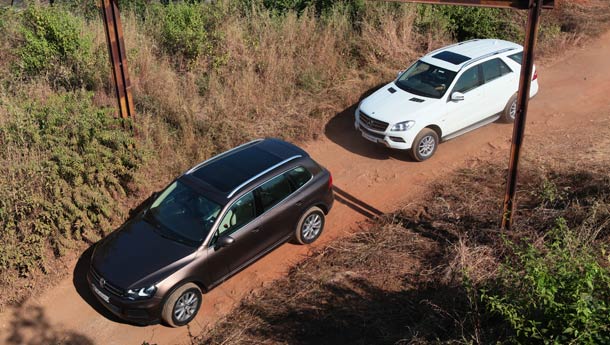 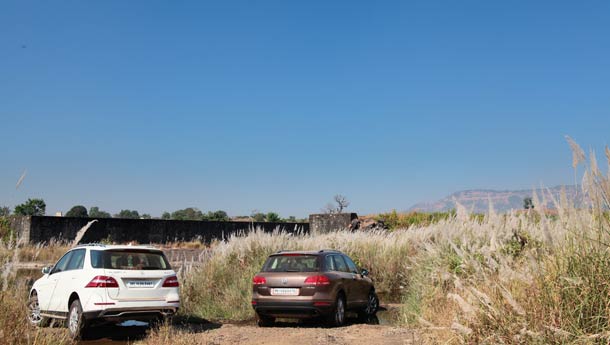 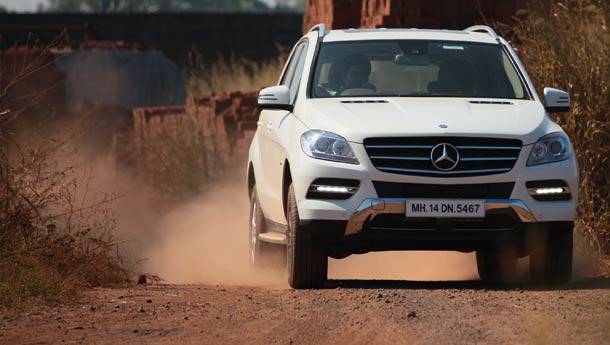 It wins by a whisker’, concluding our long-drawn conversation after a day-long drive and an equally long time spent weighing the pros and cons of our two heroes. Pablo was convinced of his choice, but it took me some more time to arrive at it. Honestly though, it didn’t end there. Another day went by mulling over the result, and then some more before I finally gave in, flipped open the laptop, put my finger on the power button and opened a text file.

This really is a nail biter of sorts. On the one hand is the second-generation Volkswagen Touareg, an SUV that hasn’t improved in increments, but by leaps and bounds. Knocking off of 200 kg (it shares its platform with the Porsche Cayenne) and the addition of a whole bunch of features, coupled with a more dynamic driving experience has made the Touareg a serious contender. On the other side is the Mercedes-Benz ML, a product that actually created this very segment in the mid ’90s. And it’s now in its third generation and has to hold on to its credentials too. Ideally they should have been flanked by a few more of the competition, but let’s just say, it’s probably meant for another time and another place.

Back then to the rivalry. Someone is holding steadfast, another is holding on to its coat tails. You can flip a few pages and head straight to the verdict (but then miss all the melodrama) or get into the spice of it all. Here goes...

LOOKEY HERE
Admittedly, people do buy SUVs for the way they look. If that is indeed the case, then the Touareg with its beefy stance, toned arches and wide tracks should be a clear winner. The design is clean yet purposeful and that should win it quite a few friends. As long as people are willing to keep their badge bias at home, that is.

Yet, the ML is no slouch. In fact, in ways more than one, the ML is more of a looker. While our test car didn’t come with those gorgeous, five-spoke AMG alloys, it still didn’t make much of a difference since the dollops of chrome on the tail gate (especially the scuff plates on the bumpers), the flanks, roof runners, et al do draw a lot of attention to it. In fact, it accentuates the ML’s lines a bit more and lends it the much needed premium look that its predecessor could have done with. But all that chrome does not make it practical if you tend to go off-road; there are just too many bits to scratch and break if you decide to go hell for leather in the rough. That’s where the Touareg’s more rugged black embellishments all around help, though honestly just a handful of owners would ever want to put their Rs 60 lakh-plus SUV into the dirt, let alone tackle a boulder.

AM I TRULY WELCOME?
Both cars feel well-built, luxurious and have enough to pamper you for a day-long journey. Let’s start with the car that’s a little distant in our memory, the Touareg. Having spent most of its time in cold storage (VW weren’t sure how to price it after the excise duty change in the current budget), the Touareg does shine through in many ways. Step inside and you are greeted with a dark chocolate brown interior (coupled with beige). High quality, soft touch plastics can be found all around, though my biggest gripe is the faux-wood finish steering wheel that doesn’t really feels great to grip.

The stereo system sounds fantastic and while it gets a keyless entry/start and auto hold, it doesn’t get an eco start-stop function (though available in Europe). What is noteworthy though is the ample room for five persons. The seats up front are large and supportive enough for people of most sizes with a commanding view of the road, but it’s the seats at the rear that make it a more comfortable place to be in, thanks to the seat squab, angle and the softer material used.

Step into the ML and what you find is an interior that is far removed from its predecessor. Just as fresh and young as it feels on the outside, the insides too feel pleasing to look at. The colour options are pretty neat too and the dials and instrumentation feel of a higher quality than before. You do feel like you’ve got your money’s worth for the car. The central console has a whole host of features, while the audio system sounds good hear too, except that the Touareg is probably better at reproducing bass. The seats are a bit on the harder side, a trait that continues from its predecessor; they don’t feel as plush as the ones on the Touareg, even though harder seats are better on longer drives. What you do get is an eco start-stop function and a whole host of programmable off-road buttons that you also do get on the Touareg.

STEP ON THE GAS
The Touareg starts off at a disadvantage if you were to glance at the specifications sheet. It develops a dozen horses less and the torque figure falls short by 7 kgm. But life is more than just horsepower and torque, it’s even more than power-to-weight and torque-to-weight figures as it clearly demonstrated.

Because the Touareg has one extra gear and because the first gear is a wee bit shorter than the ML, it’s quicker off the line. In fact the gap is yawning to begin with. The dash to 20 kph is a full 0.7 seconds quicker and while the deficit continues to be clawed back by the ML, it still isn’t enough to put it at about half a car length’s gap. The ML only starts to move things through the mid-range and surprisingly, the lack of a gear also means in the roll-ons (from 80 to 120 kph and 100 to 140 kph), the  ML is pretty much neck to neck with the big Veedub. But past 160 kph, the gap starts to widen again, with the Touareg being pretty much relentless till about the double ton. The ML probably has better high speed aero efficiency and those extra horses help it to claw its way to 210 kph with some ease before tapering off.

So how does the Touareg do it? Despite identical final drive ratios, the Touareg has a 22 kg advantage in the area of kerb weight. Not much, but then again the Touareg seems to utilise each of its horses better than the ML. The all-wheel drive unit on the Touareg seems to be better tuned, with less frictional losses, unlike the ML. But honestly, in the real world, these differences are really miniscule, so the win by the Touareg is a bit cosmetic.

Both cars use torque convertors, the Touareg’s eight-speed to the ML’s seven. If you were to consider NVH though, the ML has a leg up. The Touareg does sound sportier, mind you, but deep into three digit speeds the engine continues to be a touch louder, the ML just displaying a hint of an engine drone in the distance. Around town, the Touareg’s better off-the-line performance makes it easier to live with, the ML just requiring a bit more effort from your right leg. While braking performance of both cars is in keeping with their weights, the Touareg stops quicker and the pedal just has a bit more feel, the ML’s feeling slightly remote.

SWOOP AND TURN
You don’t expect two tonne plus SUVs to show awesome road manners, but with the way things are going (lower kerb weights, stiffer monocoques, better suspension units), these two have clearly shown improvements. The previous Touareg had understeer dialled in and its weight was quite a killer, but it now turns in more sharply, even though there is still some understeer. The lowering of masses has helped it become more agile, while the wide tracks front and rear lend it more grip. It seriously corners like it’s on rails, with very little body roll, but it always has that feeling that it will plough through corners with the same ferocity as its predecessor.

The ML is quite resolved too. Around high speed corners it feels flat and honestly there is little to choose from either SUV in that regard. The ML though has a slightly sharper-turning steering. At low speeds it feels a bit dead, but notch it up a bit and the ML tightens with more predictability. The Touareg has the more consistent steering at most speeds but doesn’t feel as good as the ML does when you decide to attack some fast switchbacks. Grip levels here too are good, but I’d pick the Touareg once again for its smarter four-wheel drive unit.

Where both these cars also run near parallel is in the ride department. While the Touareg lets you choose between comfort, normal and sport, the ML only allows you to choose between regular and sport modes. At low speeds in comfort mode, the Touareg is a bit too springy. Trying to tackle a set of speedbreakers, the Touareg felt a bit at sea. Dial in to normal and it feels just fine. Sport does make it a bit stiffer, but you don’t find the rear end getting too stiff, the way the ML does. Over a wide variety of surfaces, the Touareg feels compliant and the ride quality is pretty much in the league of some larger, luxury sedans. The ML is perfect in normal mode; switching to sport in higher speeds makes sense. Like I mentioned, the rear does feel a bit stiff, which can be slightly disconcerting for rear occupants, but it does lend a sense of surety for the driver if he or she decides to step on the throttle on a bad stretch of road.

LOST...
Out in the wilderness, both the Touareg and ML won’t leave you wanting. While they are no Range Rover or LR Disco 4, for 90 per cent of the off-road situations they work just fine. Both have suspension lift, hill-descent and electronically controlled torque split programs. The Touareg has a massive 305 mm wheel travel compared to the ML’s 285 mm. The ML’s gearing and torque allows it a bit more leeway around the slushier stuff, but the Touareg claws its way up rocks better. Neither scores significantly over the other and it’s a dead heat here.

... AND FOUND!
This really is tough. It’s so close to call that one can switch either way. But I have to give you a logical answer, one that moves beyond the ‘what if’ scenario. The ML is for you if the badge really matters. And in the real world it probably does. Whether it is getting a sign of approval from a friend or a better value for your machine when you decide to trade in, the badge does matter. If you still want the badge, but at a better value, you can go in for the ML 250 CDI that is about 50 horsepower down, but costs a full M&M XUV5oo less with pretty much the same set of features. And it’s completely knocked down, unlike the CBU-only 350. But if you want a car that will tug at your heart strings, care two hoots about resale value or the rationalities of car purchase, then look no further than the Touareg. It’s an honest, complete automobile. It really is time for people to look beyond the badge and find the diamond underneath.