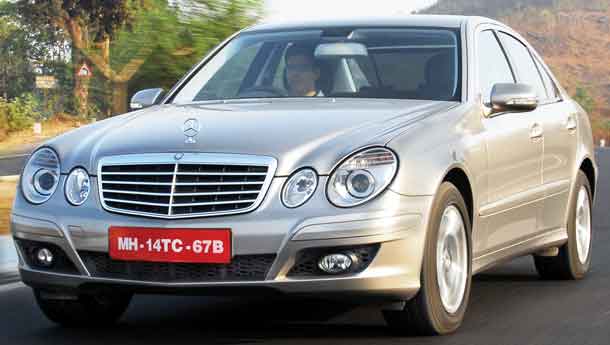 Try using words liking 'barking mad' or 'savage' or even 'intoxicating' for a standard Mercedes Benz saloon and you will roll off your bed in fits of chuckles. Stories of sheer mind freezing power and tarmac scorching are better left for mad AMGs, right?

A sense of calm prevails every time I get into a Mercedes. I'm hardly overawed by their presence (he has a big fetish for Beemers- Srini), but the sheer snug, cosseting feeling that a Merc presents snatches me from reality. Defying reality has also been the stock market, that has grown a couple of multiple times, numbers which my colleagues at the corporate section of our parent newspaper would be more than happy to dish out. It has also created a new segment of millionaires who are jumping from their C-segment sedans to D-segment bliss before you can say 'bull run'. So imagine, you cracked it big at the stock market, your portfolio had a 200 per cent return in the last one year and you are in a position to upgrade from a sixth generation Honda Accord to an E-Class. Making a statement is a priority rather than going for the 'best in segment'. The E200 K would slip into such a role just perfectly.

At Rs 44.30 lakh, on-road Mumbai, for the leather interiors and parktronic, it is a significant Rs 8.05 lakh cheaper than the E280 petrol with nearly all the features of its bigger cousin. Enough change to pick up that mint W124 E220 as well. The kompressor is also some 50 odd horses down on power - enough still to whip past 200 clicks, but at that speed you would probably be guzzling at a single digit kpl rate and a dry tank even before you complete the Mumbai-Pune-Mumbai loop. That though is pure academics, since high average speeds rather than top speeds are what really matter, something the E200 K can do with aplomb. Unlike the E280, the E200 K makes use of a five-speed gearbox and is better to flick through, unlike the E280 which moves two gears up every time you shift around the redline. Kickdowns though take a while for the electronic gadgetry to enforce. How about an Intel Pentium dual core to sort matters there, Mercedes?

For the enthusiast in you, numbers are what matter and numbers are what you will get. Leave it in D, shift to sport mode and bury the accelerator till you reach the throttle switch. Keep it pressed and the 100 kph mark will be dispatched in a shade under 10 seconds. Some 10-15 seconds later you will arrive at a figure that most international one day cricketers, in runs, are dying to knock on. DaimlerChrysler likes us to believe that the E200 K will surpass even that and at 227 kph, the supercharger will exhaust its abilities to push any further through the air. Considering Gottlieb Daimler did invent the 'blower', it should be enough to blow past many slow moving vehicles. Producing 185 horsepower at 5500rpm, it is in the typical Mercedes vein, but it is still some 28 bhp over and above the 110 kg lighter C Class. Most importantly for the stock market players, it's 12.5 per cent more powerful than its predecessor. That's a figure greater than what some banks offer interest for fixed deposits.  Torque is fairly decent too, with the entire wallop of 25 kgm gushing through the internals at 3500-4500 rpm. Nitpickers might want to argue that the E280s superior performance numbers put a tarpaulin cover over the E200 K's, but at no point did the engine feel like it's stressed. A back to back run between the two cars could reveal the small deficiency, nevertheless you don't miss the extra power under most situations.

There's no doubt that the E Class is the perfect Merc for India, and so do customers since it is the largest selling Mercedes sold as well. The cheaper C Class is sporty, but try spending a few hours in that rear seat and you will develop deep vein thrombosis. Nothing like that with the E. The hip point is just right, under thigh support is bountiful and side bolstering is perfect. Leg room is favourably in the positive zone, but that transmission tunnel ensures that no more than two pairs of legs can occupy the rear seat. Four air vents, two on the B-pillar as well, are good for someone who needs to cool down after losing 15 per cent on a blue chip scrip during an intra -day trade. The driver, though, couldn't care less if his owner was even booked for insider trading, since the front seats have the right combination of support and comfort. Quality of fit and finish is top drawer and it looks like DaimlerChrysler have improved it further since the early days of the W211. While our test car didn't have parktronic, DaimlerChrysler now offers it as standard on all new orders, a sign of competition putting the company on track. There has been significant flak for lack of electric controls for the fore and aft movement of the drivers' seat, but considering the kind of electrical issues and recalls that the E has suffered, this is one smart move on the part of the manufacturer.

You might find it hard to believe, but beyond the new headlamps, a new front grille that reflects what the 2009 E Class would probably look like and new tail lamps, there are nearly 2000 changes to the car. The steering for instance has more feel now and is more direct, but still not in the league of the BMWs . The overall grip levels are fantastic and as the picture on the previous page shows, at the higher end of double digit speeds, it toes the line like an obedient toddler (rare!). Alright, that's traction control working, but that's not all. A new set of spring link bearings ensures the car adopts a neutral cornering stance, while new rebound springs reduce body roll. As for the brakes, there's only two words to use - spot on.

As my drive drew to a close, it became evident that India's nouveau riche really have a great option in the E200 K. Performance isn't a problem, build quality is very good, driving characteristics are of a high order and space is adequate. And with that supercharger adding thrust to the car, Crisil would probably increase its rating from an Af to a AAAf.