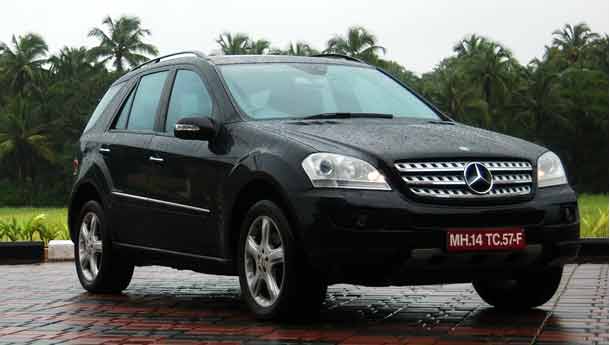 The most improbable-sounding things can happen to you in the field of auto journalism. For example, if someone had told me a few years ago that I would one day get to drive a Koenigsegg CCX, I would have laughed in no uncertain manner in their face. The point I’m trying to make is that by now, I should have become used, perhaps even inured, to these things – but of course it’s never the case. Each such new event inevitably brings on a feeling of discovery and excitement, not to mention a deep sense of gratitude to the nature of my job.

Such was the case when I was handed the key to a Mercedes-Benz S320 CDI in Goa and told that I could drive it to Belgaum, some 175 km away. Well, not just I alone, since my driving buddy Bertrand from Overdrive would be having a go too, but hey, I wasn’t kicking up a fuss. Something told me that this wouldn’t be a run of the mill drive, so I slid quite happily into the front passenger seat and settled down as Bert set things rolling. We must have made quite a sight, a 16-foot long, maroon piece of machinery virtually taking up the width of the road in the rain-drenched streets of Goa, and I must say I enjoyed the attention we were getting. Inside, we were almost hermetically sealed off from the world outside, and it was impossible to tell that a big 3-litre, V6 diesel engine was doing its stuff under the hood – full marks and more to the noise-insulation chaps.

We drove in a relatively uneventful manner to the Karnataka border, where Bert fancied a bit of shut-eye, so I took over the driving duties eagerly. Now, at my command I had 50 kgm of building-flattening torque (delivered at a ludicrous 1600-1800 rpm) and 232 snorting horses to go along with it, all delivered via the 7G-Tronic gearbox that Mercedes pioneered, and I intended to make as much use of those figures as I could.

A firm stomp on the gas pedal and the behemoth surged forward, parting the chilly night air in a manner not unlike Moses did the Red Sea. Inside, all was calm and contentment as the other occupants dozed, quite oblivious to the S’s rapid progress. The prodigious torque on offer shot the S up the hill roads without so much as blinking, and I really began to appreciate what an extraordinary piece of machinery this thing was. It dismissed corners taken at speed in a way no car of its dimensions should have a right to, and each time I was sure that it could be pushed further; not that I tried, mind you – a Rs 70 lakh-plus repair bill can’t exactly be paid off in EMIs.

Soon, a heavy fog rolled in, reducing visibility to near-zero and giving the hills an other-worldly, eerie appearance. The S simply kept gliding on, kilometre after kilometre, bend after misty bend, until we left the hills behind and descended to the outskirts of Belgaum town, fully energised and refreshed. Sunil, the jovial PR man, who had been catching forty winks in the back more or less throughout the drive, paid me perhaps the ultimate compliment. ‘I slept like a baby and didn’t feel a thing. Damn good driving, man!’ I didn’t really mind being told I was a glorified chauffeur and besides, it was all down to the car, not me. Of course, if I were in the market for an S-Class, I’d plump for the full, 12-cylinder, petrol-gulping blunderbuss – if you’re intent on making a statement, it may as well be one that says ‘I’m a capitalist pig, and the hell with you’. Nevertheless, there isn’t a shred of doubt that the oil-burner is a technological marvel, and I was going to experience it quite thoroughly over the course of the drive.

The drive I’m referring to is the one that DaimlerChrysler India organised for us hacks in the auto magazine business, in order to showcase their diesel technology. We were to drive from their factory in Pune to Bangalore, via Goa and Belgaum, and it would continue to other parts of the country later on. All their diesels were front and centre (the C-, E-, S- and M-Class as well as the Viano), but I’ll deal with their 2987cc V6 engine here, because it was doing duty in the S-, E- and M-Class conjoined with the 7G-Tronic transmission. This is not to belittle the C220 CDI (both diesel and biodiesel versions) or the Viano, both of which are good vehicles in their own right, but let’s face it, a V6 is a V6. Earlier, I had had the ML320 CDI to myself over a long stretch of relatively poor, single-carriageway road, and again the robust engine had delighted me. This time I had even more torque to play with, 54 kgm at 1600-2400 rpm, and the big SUV simply ate up whatever that road threw at me. All the praise that the M-Class has been garnering worldwide is fully deserved, let me tell you – this car will take you to the ends of the earth in supreme comfort, act like a sedan around any corners you might encounter along the way and still sip fairly frugally on fuel. It might decide to get rid of a wiper arm at 210 kph, as it alarmingly did at one point on the drive, but we’ll forgive it some foibles.

This brings us to the E280 CDI, a car I hadn’t driven before but one which has now made a fan of me. It’s interesting to see how the same engine and gearbox can impart completely different characteristics to three diverse cars. The S320 (or rather the S-Class in general) is, in all honesty, a totally superfluous extravagance, a middle-finger in the face of common sense – but a captivating vehicle nevertheless. The big ML320 is butch, just a bit gruff and a supremely capable off-roader, but it’s not for everyone. The E, on the other hand, is where everything comes together perfectly. It’s almost as luxurious as the S (without some of the electronic gizmoids), it’s almost as roomy and, most importantly, it’s the most fun to drive. Flat out at its top speed, it’s both a thrilling and relaxed experience – the S-Class doesn’t give you quite the same high. Dynamically, it offers great ride quality and the sort of handling that’ll fill even the most nervous driver with confidence. The V6 in this car produces 46 kgm and 190 bhp, which is more than sufficient for just about any situation, and it’s also the cheapest car of the three, although I use the word in a strictly relative sense here.

If you’re looking to buy a luxury sedan and are suspicious about diesel, one drive in the E280 CDI will blow your doubts into the weeds. In that sense, the drive achieved its purpose handsomely, although I have to say that most of the participants probably knew this anyway – diesels are as much fun as petrols, refinement levels will one day surely rival that of a petrol engine, frugality is a given (none of the cars returned less than 8 kpl, driven hell for leather) and most advanced diesel engines are getting cleaner than their petrol counterparts. Dare I say it? Oh, what the hell – diesel is the new petrol.