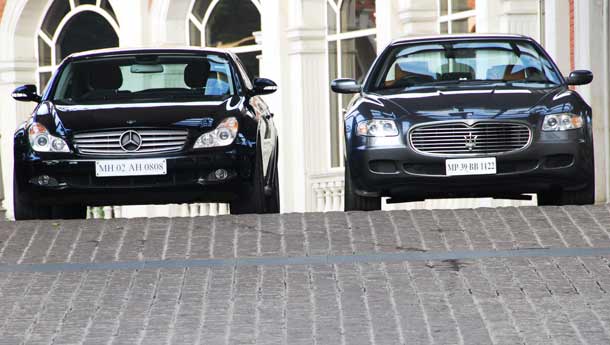 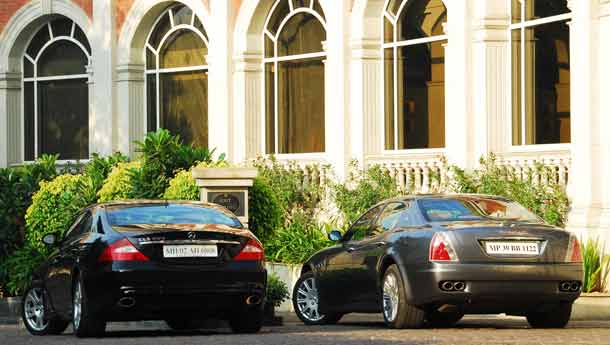 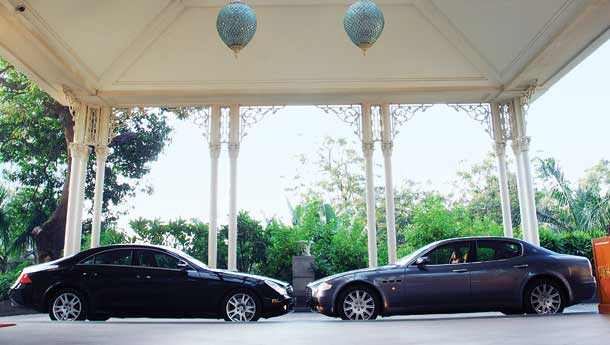 Recovered? Tongue back safely inside your mouth? Yes, it happens. I have just barely managed to put myself together to write this article, while Pablo has taken a two-day break from work just to recover from what he has photographed.

Seeing a Mercedes-Benz CLS in the flesh itself is quite an event. Sometimes I see this very car in the Auto Hangar showroom in Mumbai, glistening under the arc-lights, looking as smug as a gorgeous actress posing for the flashbulbs in Cannes. Sometimes I spot a beige CLS in thick South Mumbai traffic rubbing shoulders with humdrum cars, reminding me of that scene in The Matrix, where that gorgeous blonde in the red dress simply stands out in the crowd on the sidewalk. And then when the traffic starts to move, the CLS serenely glides past, allowing me to breathe again.

If you still don’t get the picture, let me spell it out for you: of all the four-door sedans that emerge from automotive factories anywhere in the world, there are only two cars that can claim to be the most beautiful of them all, and one of them is the Mercedes-Benz CLS.

The other, obviously, is the Maserati Quattroporte. Looking at its launch images three years back, the Quattroporte came across as an unusual interpretation of a, well, quattroporte. It looked more beefy than gorgeous, aggressive rather than suave. And when I saw it in the flesh in India when we featured the car in our April Summer Of Speed issue, it dazzled the senses with its strong lines, awesome details and purposeful stance. Nowhere can you see this fine a combination of beauty and brawn.   We have featured both these cars independently before and have driven them too. So have a host of other magazines worldwide. But we needed to bring two of the most beautiful four-door sedans in the world together – not because no one’s done it before, not merely to give our jaded eyes a much deserved treat – but to celebrate the success of emotional automotive design.Four-door three-boxes are mundane. Functional. Commonplace. A format that the world’s car buyers are comfortable with and are showing no signs of being tired of either. So when you create exhibits fit for MoMA within this rigid framework, it’s a cause for celebration. To us, there’s no such thing as excessive automotive beauty.

And what a contrast both make. The Mercedes is cool, collected and icy Teutonic, while the Maserati is hot, aggressive and fiery Latino. The CLS is about form and proportions while the Quattroporte is about details and attitude. The German is 21st century post-modernism while the Italian is 20th century Renaissance. The CLS calls itself a four-door coupe while the Quattroporte means just that – a four-door car (trust the Italians to make something so simple sound so exquisite). The Merc is best seen at night with the lights of the city reflecting on it, while the Maser deserves to be between a harsh sun and dry tarmac. The CLS is meant to draw up at a Monte Carlo casino where the minimum bet is 5,000 greenbacks, while the Quattroporte is more suited to crisscrossing the Spanish continent in search of the perfect red Rioja.

Remarkable isn’t it, how two diverse philosophies of design can lead to the same objective – that of making people, or at least motoring journalists, or at least Motoring journalists, sigh in wonderment. Yes, this specially put together feature is an unabashed celebration of automotive design and nothing else. Okay, let me make a concession to those who want to know what these cars are like to drive. First off, the CLS. Built using the current E-Class’ underpinnings, but cleverly priced between the E and the S (oh, the price of looking good!), the CLS is overtly sporty compared to its conventional-looking sibling. The CLS is low-slung and the tight, coupe-like architecture only serves to make you feel intimate and one with the car. The response from the steering wheel is much more immediate while the suspension is appreciably and suitably taut, compared to the bulky E. Powering this CLS 350 is a 24-valve 3498cc V6 that develops 268 bhp at 6000 rpm and 35.4 kgm between 2400 and 5000 revs. As expected, the 7G-Tronic automatic gearbox does duty of sending power to the rear wheels. This versatile V6 in the CLS has been tuned to waft the car swiftly – if such a thing exists – rather than blow the doors off a Quattroporte. Because it can’t.   You see, the V8 is an out-and-out performer. And unlike the CLS that gently oozes its way around, the Maser’s twin exhausts emit fine bass notes that won’t be out of place if they emerge from red cars wearing prancing horses on their skin. Obviously, because this V8 is built in Maranello and then shipped to the high-tech Maserati facility at Modena.

It’s a work of art in itself, but that’s for another story! The 32-valve 4244cc V8 delivers 400 Italian thoroughbreds at a screaming 7000 rpm while torque is rated at 33 kgm at 4500 revs. The Quattroporte features a transaxle, which means the rear-positioned gearbox in unit with the differential. Now, this layout is usually seen in sports cars rather than four-door saloons, and Maserati has positioned the engine well behind the front axle to give the Quattroporte a 47: 53 front/rear weight distribution. So unlike the CLS, the Maser is best driven like a sports car, and it appreciates it when you do just that.

Again, two different schools of thought in the way these saloons deliver power and move. Yes, even if this was the 306 bhp V8-powered 500 or even the 503 bhp 63 AMG and not the 350, the CLS would still have been fundamentally different to the Maser when it came to the driving experience. This is exactly how it’s supposed to be – the cars move the way they look. Perfect. Now just turn back the pages and start looking at them all over again.