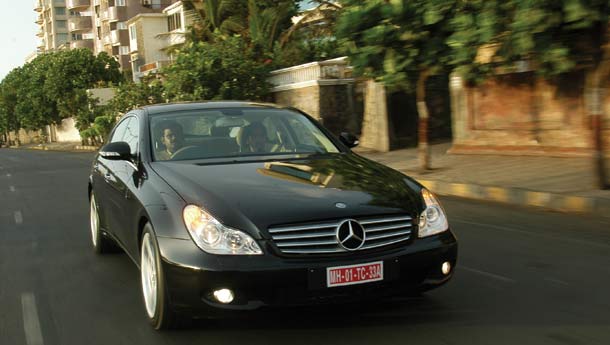 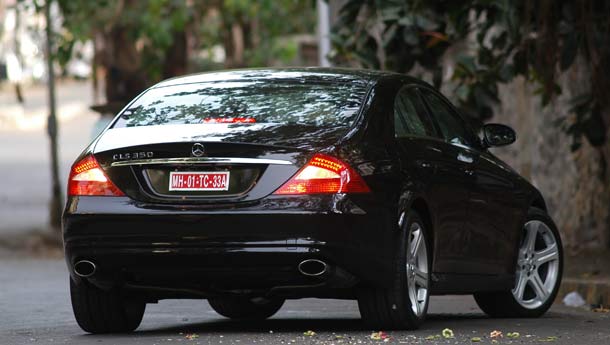 Who would buy a Mercedes-Benz that’s essentially a sleeker looking E-Class, with barely enough headroom at the rear, yet priced at almost double the cost of a W211? Well, for starters, there’s Anil Ambani. And a host of other enormously rich young Turks who want to be seen driving their own Mercs without compromising on most of the benefits that the E-Class offers. If that doesn’t answer your question on the rationale of the existence of a four-door coupé, then I guess you better read on.

At the last Frankfurt Motor Show – back in 2003 – Mercedes showcased the Vision CLS, an almost production-ready concept that had the silhouette of a coupé, yet featured four full doors. Not surprisingly, it raised more questions than answers. What the heck is a four-door coupé? Why on earth is it called a coupé?

If it has a B-pillar, then how can it be a coupé? Do we earthlings really need a four-door coupé? And so on and so forth. The world – actually, incredulous motoring journalists – thought that DaimlerChrysler had finally lost it; that they were creating niches that didn’t need to exist. DC thought otherwise. They not only went ahead and gave the CLS the go-ahead for production, but, as we have recently seen, also created new niches in the marketplace in the form of the B-Class and the R-Class. So is Mercedes too bold by treading into uncharted territory? Is it the right path for the star to follow? Well, I hope to give you the answer maybe 20 years down the line. In the meantime, there’s still the CLS.

Before we go on to drive the car, just a little note in Mercedes-Benz’s defence. When you already have everything in place, in terms of manufacturing technology, the drivetrain, the suspension and other bits and bobs that go into these cars, it’s hardly difficult to mix-and-match what you have and chuck it in an entirely new bodyshell. So if Mercedes can offer a smashing-looking new product that uses most of what they have lying around here and there in Stuttgart, create a new segment in the process, and – now this is important – make large profits by pricing it stratospherically high, who’s complaining? Other than those motoring journos, that is.

Well, I sure am not one of them. The CLS is breathtaking to look at in the flesh, and the black sheen this car came wearing makes it look menacing all right. Add glossy, shiny wheels, chrome bits and
pink fur interiors and it’s the blingmobile you have been waiting for all your life. Still, amongst all the Mercs around, barring the SLK and SLR, this is the most good looking one of them all. It’s short, curvy without being overtly so, features frame-less doors and has a few nifty creases that you’d find in a fancy Italian suit. For a Mercedes-Benz, it’s rather dramatic to look at, and heralds a new wave of cars wearing similar lines and three-pointed stars, but it certainly ain’t a coupé. Unlike the designers, I guess the marketing guys at DC have gone a bit overboard.   And because it’s called one, it’s quite low and you have to stoop to get in. Once inside, there’s no doubt it’s one of the new-gen Mercs. Familiar buttons, switches, controls and stalks... you have seen them all before in one Benz or the other. But what makes this different is that there’s a huge panel of highly polished wood (Burr walnut? Conifero psychosis? Rotunda macadamia?... well, one of those) on the dash occupying the spot where you’d find a tonne of high density polyethylene or some such. Frankly, I think this is a shortcut taken by the interior designer – have a lot of space on the dash? Then plonk some fine-sounding wood if it’s a luxury car, and matt finish HDPE if it’s a non-luxury car. Once upon a time – read the 1950s and 60s – Mercedes knew how to use wood tastefully, hence my little crib. Ease into the back seat and you notice that there is an ashtray exactly at the point where your cigar would end – now that is like stretching ergonomics all the way to Cuba. Brilliant. Getting out of the rear seat and into the red carpet is an acquired art and it will certainly help if you have been spending a bit of your money in keeping fit.

Powering this CLS 350 is the very familiar V6 that’s also found in the S-Class sold in India by DC, a 24-valve 3498cc gasoline-drinking unit that develops 268 bhp at 6000 rpm and 35.4 kgm between 2400 and 5000 revs. And transmitting the power to the rear wheels is an engineering marvel which Mercedes calls their 7G-Tronic automatic gearbox – arguably one of the finest V6 and gearbox combos around. The V6, which replaced the 320, is silky smooth and makes driving absolutely effortless. Thanks to the high torque that comes in at an easily approachable point in the rev range, hauling this 1,730 kg machine is not a problem. This same V6 when powering the SLK is quite a different beast, but in this case, it’s total refinement and dignified power delivery above everything else.

Doing justice to the engine is the new 7G-Tronic automatic transmission, which, thanks to seven gear ratios to play around with, is always ready when you are game. It’s much, much smoother than any other automatic tranny I have driven and upshifts are virtually seamless. So it doesn’t catch you by surprise – with any other automatic, it always happens that there’s an uncontrollable spurt in power during upshifts and there’s
always a spindly two-wheeler with the whole joint family in front of you. Oh, I am not done with this gearbox yet. It’s brilliant at crawling speeds too; you’ll appreciate it best when you’re stuck in a traffic jam. Mercedes says that one of the biggest benefits of their 7G-Tronic is that it downshifts by skipping a few gears and that means better fuel efficiency too. As if you care.

What I liked best about the CLS – and this is where the marketing suits are right – is that it feels much better in the driver’s seat than in the E (no, they left the bit about the E). It’s hunkered down, and the view through the windscreen is not unlike the short-lived C Sports Coupé – sporty, nose-down and ready to chew tarmac. While the E feels large and blowsy, the CLS is much more intimate and definitely offers a more dynamic driving experience. It’s almost, er, coupé-like.

Unlike the E, the CLS is a wee bit skittish on bad roads, and the suspension componentry is set firmer than the tarmac-smothering E’s setup. Now, for Stuttgart’s sake, understand that this is a coupé and hence it is meant to give a certain degree of feedback from the front wheels, which is exactly what it does. With a four-link suspension at the front and multi-link at the rear, with coil springs, gas shocks and stabiliser bars at both ends, the ride is a bit stiffer than what you’d normally be used to in a car bearing the three-pointed star. Instead you get crisp turn-in from a precise steering system, perfect balance into corners irrespective of speed and magnificent poise meant only for extremely pricey automobiles. Paris to Nice anyone? The CLS would do it comfortably and leave TGVs panting while at it. If you are buying a Mercedes to be chauffeur driven, get yourself an S-Class instead, as you’re not exactly going to be cosseted in the rear seat of the CLS and you have barely enough headroom.

Which means only one thing. The driver’s seat is the place to be. Heck, imagine yourself driving your own Mercedes – hey, that’s the sort of reverse snobbery I like. For Rs 60 lakh upwards, the CLS certainly isn’t cheap, but what you do get is plenty of flash value that’s now missing thanks to the commonality of E- and S-Class Mercs. Like Anilbhai, you already have those, so Mercedes is offering you something new to keep you in the fold. Hmm, these marketing guys are clever after all.