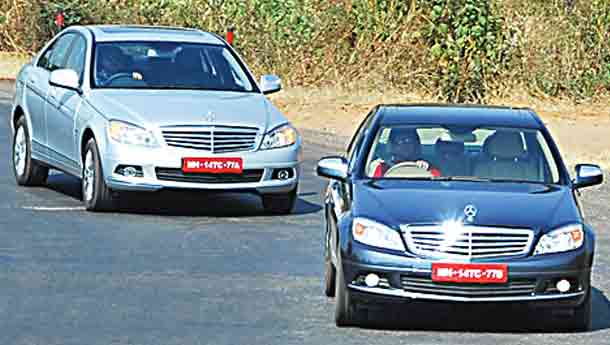 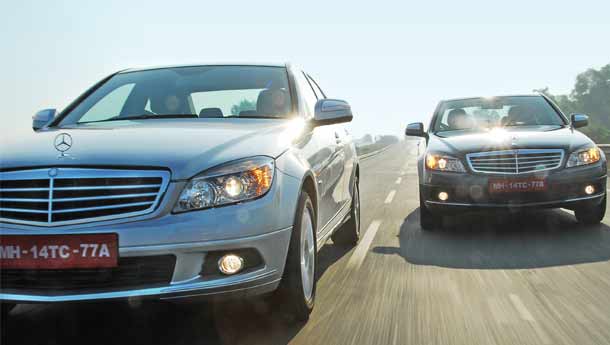 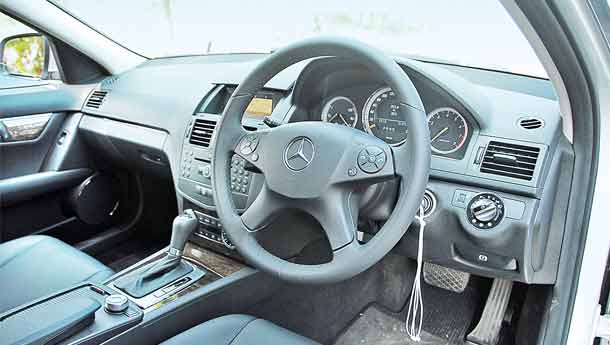 If there was ever a gentlemen’s agreement between the three German luxury car makers, well, somehow they have stuck to it for decades. Mercedes-Benz is all about comfort, BMW stands for driving pleasure and Audi is somewhere in between with some high-tech thrown in. Sometimes, the lines get slightly blurred. Like now, for instance. The new C-Class is a better driver’s car without losing on the core Mercedes focus of comfort… and it is no less high-tech. Star, propeller badge, four rings, all rolled into one? Well, almost.

I am in the cockpit of the C 220 CDI and revelling in the sheer joy of driving an all-new Merc. Driving fresh stock from Stuttgart is a very special experience for someone like me who’s passionate about the Star. Funny qualification for a motoring journalist who’s supposed to be unbiased, but what to do? I am a big Mercedes-Benz buff. So There!

As I was saying, the lines are getting blurred, the ones on the road, I mean. I am driving over some of the finest stretches of highway tarmac – NH17, that goes from Mumbai to Goa and beyond – smooth, broad and very curvy. But to get to the empty sections of the road, you have to pass through congested areas. The C 220 CDI comes with a five-speed automatic transmission that makes quick work of such zones. Power gets transferred to the rear wheels without fuss and you are not left waiting for the turbo lag to get over with to make progress. Though the car is bigger than the one it replaces, it is small enough to thread your way easily between other cars, people and trucks. The steering wheel is good to hold and is effortless to manoeuvre in such situations. Do I see any heads turn? Well, some. More than the looks of the car, I think it has more to do with the Star’s appeal. Behind me was Rohin in the C 200 K and I noticed that he was having trouble keeping up with the diesel sibling. When I got behind the wheel later I knew why.   Both the petrol and diesel versions came in the Elegance trim, but with different interior treatments, beige and dark grey. Though the beige is bright and cheerful, it’s the darker one that makes practical sense – unless you have a diligent chauffeur who scrubs the car clean while waiting for you instead of snoozing in it with the AC running. The layout is completely traditional and that’s what people expect from the three-pointed star.Quality is very good and the ergonomics are all spot-on; you are instantly comfortable the moment you sit in it. The piece de resistance is the central portion of the dash that slides up at the touch of a button to reveal the monitor, but the sad part is that you have to physically push it down when you want to shut it. DaimlerChrysler has given most of what the competition offers as creature comforts for a car in this category, including that Comand function, but two things remain. You still have to physically yank the control to slide the front seats back and forth and that ‘classic’ foot-operated parking brake also stays. Even cars down the line offer electronic controls for the front/back seat position, while parking brakes are now electronic in this segment. I know tradition is great, but dear Mercedes-Benz, this is a bit much.

Back to the road. Leaving the cumbersome sections behind, the C 220 CDI gets an opportunity to stretch its legs. The 2148cc four-cylinder 16 valve turbodiesel develops 170 bhp at just 3700 rpm and a brilliant 41 kgm of turning force from just 2000 revs onwards. Okay, it’s not a V6, but these specs from a four-cylinder motor are class-leading. That’s because those wonks at Stuttgart have made it happen by working on the turbocharger, the common-rail system and other parts of the engine. Mercedes claims that they have modified over 90 components in this engine, which is why it develops better power and torque than before, which was 140 bhp and 34 kgm.

Now that is really an improvement and it shows. The arrival of all that power and torque at low revs means that the C 220 is eminently driveable across the board. It performed well in those crowded sections, and now it is doing over 100 kph. I knock on the instrument panel to get the tachometer needle moving, but it doesn’t. Ha ha, joking. No, seriously, the needle is as relaxed as a beach bum in Goa while the car is already into three-digit speeds and still going strong. Press the pedal a wee bit further and the engine takes it up without any slack. The five-speed automatic gearbox does not have a chance to mar proceedings here, and the engine overwhelms it with its performance on tap – but the transmission will take revenge soon. Our test figures reveal that the C 220 is pretty quick for a four-pot diesel, and this is not just in the mid-range timings. Even the standing start to 60 kph and 100 kph is good by any standard. Heck, when you have more torque than the six-cylinder BMW 525d (okay, maybe at a bit higher rpm), what else do you expect?

When seen in the light of the stupendous performance from the diesel, the C 200 Kompressor feels unimpressive. The 1796cc four-cylinder engine with additional help from the supercharger develops 178 bhp at 5600 revs and over 24 kgm of torque from 3500 rpm onwards. The specs do look good, especially since those Mercedes engineers have again tuned this motor to develop more power and torque compared to the previous version. And when you look at the performance figures, the C 200 K keeps up well with its diesel sibling, especially in the 0 to 100 kph and mid-range timings. Except for being almost a second slower when it comes to the 0 to 60 kph dash, it acquits itself very well. So what am I complaining about? Why do I say it feels sad?   What numbers don’t tell you is how driveable the car is... or not. Combined with the forced induction and an automatic gearbox, the C 200 K does not feel as quick on the go as the diesel. In city conditions, you need the supercharger and the auto’box to finish their spooling and lagging respectively to start moving. Where the diesel was ready at low rpm, the petrol version just starts thinking of moving. So what you get is a car that is actually decently fast, but doesn’t feel so. Okay, now the gearbox comes with Touch shift manual override, does that make things better? Um, not exactly. Upshifts make the right kind of noises but it does not translate into really enthralling performance unless you really step on the pedal. Downshifts are much better and the gearbox steps down by two ratios every time you do that, which adds a bit of enthusiasm to the package thankfully. But there’s no doubt about that if you want to whip the C 200 K, it makes sense to use the Touch shift.

Where the C-Class really impresses is in the ride and handling section. The car uses a three-link front suspension with McPherson struts and Mercedes-Benz’s classic multi-link independent suspension setup at the rear. The C-Class does a brilliant job of keeping the tarmac where it is, now that’s something Mercedes really does best. It is much better than the ride that the last generation C offered and is plush without being too bouncy. BMW would do well to learn from their arch-rivals how to replicate it in the 3 Series. And before you ask, yes. The C compares quite well to the handling abilities of the 3er. That’s because Mercedes has made a conscious effort to do so. They have incorporated as standard the Agility Control package for the suspension, where the shock absorbers adapt automatically to the driving conditions. Basically, when you are doing regular speeds, the damping forces are reduced, and when you pick up speed, damping forces are maximised. The Agility Control package also imparts the steering a more direct ratio and it takes into account the throttle control as well as the gearshift points.

Well, that’s what Mercedes says. What that means to you and me is that the C-Class is adaptive to your driving inputs. When you really want to flog it over the curves, the character of the car goes through a slight change and it becomes more taut. It overcomes its sedate manner and becomes slightly aggressive,but not overdoing it either. Maybe you don’t feel one with it like you do in a 3 Series (which has fantastic balance), but it comes pretty close without losing its core attribute of comfort. Similarly, the steering perceptibly tightens up when you push the car around curves, but feedback is just about adequate. It is not overwhelmingly sporty, as if it’s been designed for the owner who’s usually a rear seat passenger to enjoy it over weekends. High speed poise is superb and the braking is exemplary. The new C is all about controlled aggression. It is like having a decent amount of fun, but with your clothes on.The new aggression of the C-Class is evident in the exterior design too. Gone is that fluid look and in come dynamic lines and strong cuts. I think the brief given to Peter Pfeiffer, the low profile head of design at Mercedes-Benz, was that the hewn-from-a-block-of-steel look must make a comeback. And that’s what he has attempted with the new C. To an extent, it works, but it also looks like a shrunken version of the flagship S-Class, especially those prominent wheel arches. The overall design is much more sober, but the new C attracted attention from the right kind of people. People stepped down from Land Cruisers and Cayennes to give it a once-over when we were parked.

So where do we stand with the new C-Class Mercedes-Benz? As we go to press, DaimlerChrysler India has yet to launch the car and announce the pricing. We expect it to be about Rs 1.5 lakh more than the outgoing version, still, there’s no doubt that the C will be a hit in India. It hits the right spots in terms of what a prospective buyer would want: star appeal, solid appearance, decent rear legroom and ride comfort. For performance, there’s no doubt that it has to be the diesel. Though it is not too overtly entertaining a car to drive like a BMW 3, it is still enjoyable to pilot it. If Mercedes-Benz wants to seriously blur those lines I mentioned at the beginning, what they should do is introduce more powerful options in the purposeful Avant Garde trim with that prominent star on the grille. Else order for the C 63 AMG!