As Mercedes-Benz launches the diesel variant of its new C Class, competition in luxury saloon segment boils to a new degree of celsius. The three pointed star automaker introduced the C 220 CDI Style at Rs 39.90 lac and C 220 CDI Avantgarde at Rs 42.90 lac. The car lock horns with BMW 3 Series 320d and Audi A4 35 TDI. Audi and BMW though have an edge over the Merc as they have more variants (3 each) in their model lineup and are couple of lac cheaper than C Class’s two variants. Lets find out the crucial differences between the Big Three German luxuries. Mercedes new C-Class takes its styling cues from the flagship sibling S Class and thus has raised the bar when it comes to exterior and interior updates. The C220 CDI features all-LED headlamps with daytime running LEDs which are yet to be updated in 3 Series and A4. Dimension wise Audi A4 is longest in the segment and 3 Series is the most compact but C Class has the largest wheelbase in the segment that raises the rear seat comfort. 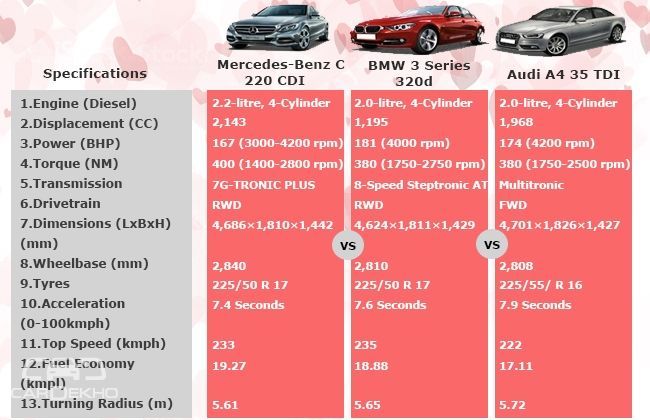 In terms of performance, BMW 3 series clocks more Bhp while the C Class diesel is a bit under powered. The C 220 CDI as the name suggests, carries a 2.2-litre in-line 4 cylinder engine good enough to churn max power of 167bhp and peak torque of 400Nm. The engine is mated to 7G-TRONIC Plus which adds thrill in driving. The Bimmer houses a 2.0 TwinPower Turbo engine that musters 181bhp with max torque of 380Nm. The engine is mated to 8-Speed Steptronic Automatic Transmission. Both the Mercedes C220 CDI and BMW 320d comes with rear wheel drive mechanism while Audi A4 is a front wheel drive vehicle. The Audi A4 gets its power of 174bhp from a 2.0-litre engine and generates peak torque of 380Nm. As the torque of C220 CDI is max among the three, it so achieves the 0 to 100 figure in 7.4 seconds, quickest in quarter mile race. 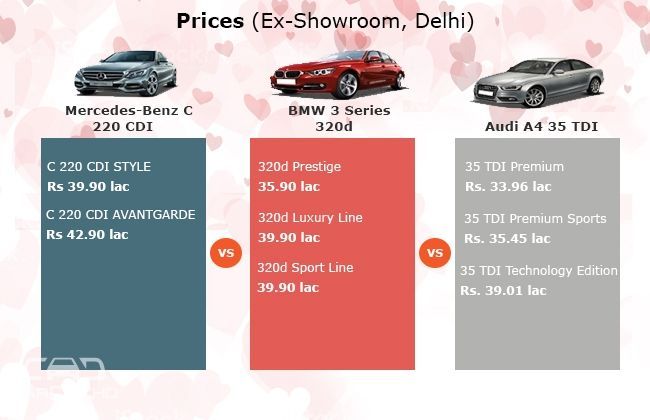 Talking about the fuel efficiency, the C-Class diesel gives a mileage of 19.27kmpl, 3 series 320d delivers fuel economy of 18.88kmpl while the most fuel efficient among the lot is the A4, which returns 17.11kmpl. SAFETY

Merc C-Class comes with an array of safety features. It gets Pre-Safe which recognizes critical driving situations in advance and activates safety systems, as a precautionary move. It also comes with Attention Assist, which analyzes driving styles and provides visual and audible warnings, if it detects any signs of drowsiness or inattention of driver. Apart from these, the new ‘C’ comes equipped with 7-airbags, ABS, BAS (Brake Assist System), ESP (Electronic Stability Program), ASR (Acceleration Skid Control), amongst other safety features.