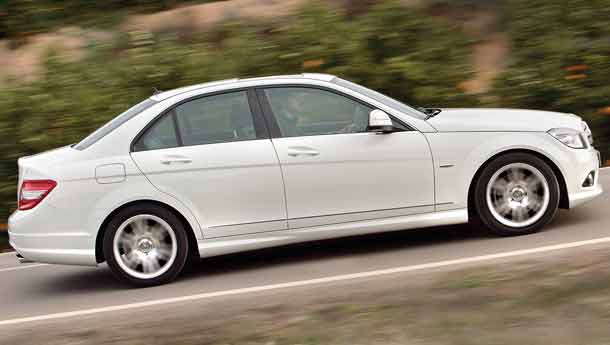 Valencia, the third largest city in Spain, was slowly getting into ‘fallas’ mode. Fallas, pronounced ‘fayas’, is the carnival season that heralds spring. So the squares were being decorated, huge temporary statues with folk themes erected, streets illuminated. This year, the city is hosting the Americas Cup sailing challenge and its football team is also doing rather well.

But we had just one evening to soak up the festivities and the generally laid-back yet vibrant attributes of this beautiful town. Before we could settle in, we were driving a sparkling white Mercedes-Benz C 320 CDI and heading out of town – the brilliantly planned route taking us to the old town of Alcoy on the way to our destination, at Benidorm. Stunning roads and an all new Mercedes-Benz are ingredients that make the life of a motoring scribe what it is. But guess what, this is going to be a rather biased article. Let me explain.  Go ahead, read any other review before you decide to spend a wad of cash on the new C-Class and need an objective and fair judgement. But if you are the sort who buys cars by objectivity alone, then you might as well buy only Toyota Corollas all your life – in different colours, to spice up things, perhaps.

This story is biased because I was always in love with the baby Mercedes-Benz. Right from the boxy 190 (W201) through the tank-like W202 which wore the C-Class badge for the first time to the pretty and always smiling W203 with the fused twin-headlamps. For me, and to a lot of others going by the sales numbers, the baby Mercedes is a paradox of sorts – proud yet practical, small yet safe, boring yet fast, especially with AMG badging on the boot lid. And the fact that it always mimicked the design of the uber S-Class and was still relatively affordable worked in its favour too.

Tradition vs sport
Honestly, I was not very impressed to see the first pics of the W204 or the new C-Class. And that is partly because I was expecting a more radical design. I shouldn’t have and instead I should have taken a second look at the latest S-Class. Like the big Merc, the new baby has lost the fused twin headlamps, developed wide and almost retro wheel arches and overall has taken a bold step back to the traditional, tank-inspired, design. Take a closer look, in the flesh (the Spanish sun rays help) and you realise the role of the automotive designer in this car is big and it comes through in the slightly curved silhouette, sportier waistline and a very stately stance. And occasionally, this Mercedes manages to look sportier than some offerings from Munich.

The starting point to this bold sporting flavour comes, of course, from the ‘avantgarde’ trim option with a beautiful three-slat grille with a large three-pointed star set in it. Yes, just like in the SLs ranging from the Gullwing to the newest one. But if you want to stick to tradition, a chrome-rich grille with the star on the bonnet is available with the ‘elegance’ trim. The trapezoidal headlamps look quite characterless in pics, but in reality they are cleverly integrated to the flanks and the bonnet shut-line blends into the ‘eyebrows’ with spectacular effect. In profile, the C-Class has more than a hint of the mighty successful CLS to it – which is certainly a good thing. Our test car came with the AMG sports package with lowered suspension and 17-inch 12-spoke wheels running 225/45 tyres at the front and 245/40 tyres at the back. Add to that aprons, skirts and perforated front disc brakes along with the aforementioned sporty grille and you have a seriously sexy car.

The comfort factor
The road to Alcoy was dismissed by the new C with aplomb and part of the credit goes to the interior that made me immediately comfortable and one with the machine. I did have a problem getting in and out of the car, though. Sure I do have some girth to move against or along with gravity and am not a flexible gymnast either – but the high sills and low seating are sedan virtues of the past and you have to endure this to enjoy the dynamic advantages that come with the package. So I learnt the art of falling into the seat and then struggling out of the seat using an arm that mimics a crane. Once settled on the seat, the leather wrapped (you can specify manmade leather or genuine hide) interior felt like a cocoon. The raised dashboard, seat adjustments on the door panels and perfect ergonomics make you feel good. There is enough wood to remind you that you are in a luxury car but not enough to make you feel guilty of endangering rainforests. Personally, I like the piano lacquer finish that oh-so-well compliments the metal bits. Similarly there is a dash of chrome here and there and I love the use of aluminium for dials as well as the ‘Comand’ unit. There are some angles – the way the dashboard converges to the centre console and how the hood is shaped for the essential dials – that reminds you of Mercs of the past. And yes, paying respect to the past again are the foot-operated parking brake with the release lever on the dash and the glove compartment with a huge lock. Some things will never change, and should not too.

While all cars come equipped with two-zone automatic climate control, you can specify the ‘thermotronic’ three-zone option if you are going to use the rear seat more often. The Comand module is easy to master and can be used for navigation, audio and video entertainment as well as telephone duties. If you wish, the system will read out your SMS messages – clever, isn’t it? The test cars had the ‘keyless go’ option and it is a pleasure to get into the car and hit the ‘start’ button instead of hunting for a hole to insert the key in. Especially at night.

Power options
The only engine options that I could sample were the C 320 CDI and the C 350 petrol. Both these V6 motors may not come to India to begin with. You can expect the brilliant 220 CDI engine (now developing 170 bhp and 40 kgm) to power the C-Class along with the supercharged four-cylinder petrol engines good for 156 or 184 bhp.  But that shouldn’t stop me from telling you how much fun I had with the six-packers, right? The C 320 CDI displaces 2987cc to develop 224 bhp at 3800 rpm and an SUV rivalling 51 kgm of torque between 1600 and 2800 rpm. Our test car came equipped with the optional 7G-tronic automatic with AMG-spec paddle-shift levers. This gearbox is the world’s only seven-speed auto transmission and comes as standard equipment for the V6 petrol-powered C 350 but can be ordered with other six cylinder models in the C-Class range. The C 320 CDI can charge to 100 kph in 7.7 seconds flat – only a second or so longer than what the 272 bhp C 350 petrol would take! This engine is frugal and can return 10 kpl in city traffic and 14 kpl or more with careful highway driving. Though I had the option of changing gears, I left the gear selector in ‘D’ and let the prodigious torque do the job. It was amazing how the car pulled through after I got it to near-stall situations on nasty cork-screws.

The petrol engine on the other hand is certainly one of the most refined V6s on this planet. It can do 100 kph in 6.3 seconds and this is not an AMG massaged engine that we are talking about. Common-rail diesels work well and serve the purpose alright, but when you are looking for silky refinement and seamless performance, a Mercedes V6 can teach you a lesson or two.
‘agility’ the new

Key word
The drive from Alcoy to Benidorm was as great as any road that would take you to a golf resort lined by the ocean would be. Twisty mountain roads with no room for error and then another wide and winding bit of asphalt with red shoulders was to be the highlight of the whole C-Class driving experience. Traffic in this part of Spain is so sparse that you are tempted to drive really fast. But then, I was not looking forward to greeting an ageing Seat driven by an ancient man on his way to buy bread around a corner and exercised some restraint.

The new C-Class has a three-link front suspension with coil springs and dampers and a multi-link rear setup. At both ends the gas-pressure shock absorbers feature an amplitude-dependent damping system. Standard on all C-Class models is the ‘agility control’ package. This involves a selective damping system which automatically adjusts the suspension setup in accordance with the condition of the road. If you want to be in control of the setup then you can choose the ‘advanced agility control’ package with special sports mode so that you can decide between a particularly sporty suspension and a comfortable ride at the touch of a button.Mercedes-Benz cars are at their best when they are rear wheel driven because they were designed to be so. Even with the traction control system and the stability control package, it is obvious that the power goes to the rear wheels and the car is not ashamed to let its tail wash out in the middle of an aggressively taken corner for a nanosecond before electronics takes over. Brilliant. But if you really want the security of power going to all wheels, Mercedes will offer you the ‘4matic’ transmission as an option – not to be bothered with in India unless you live in Gulmarg and commute to Srinagar at the height of winter.The steering may not be as sensitive as you would find in a performance-oriented BMW, but it is far more connected than that of the car it replaces. Speed-sensitive steering is part of the sport package though. Ride quality in sports mode is excellent and you can feel the texture of the road change beneath you. But above all, the Mercedes virtue of a relentless ability to cruise without you having to worry about the condition of the road is retained, which should be good news for prospective buyers in India.

All in all, the new C-Class is a bigger, better interpretation of the ‘baby Benz’ theme. And it is very unlike Mercedes-Benz to offer it with two visages – and hence it represents the new thinking process that runs matters at Stuttgart. The sight of the new car in ‘avantgarde’ trim gunning for your rear view mirror can be quite imposing. Especially if you drive cars with alpha-numeric prefixes such as 325d and A4.