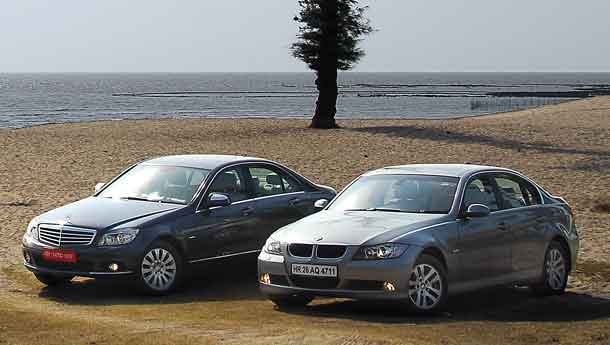 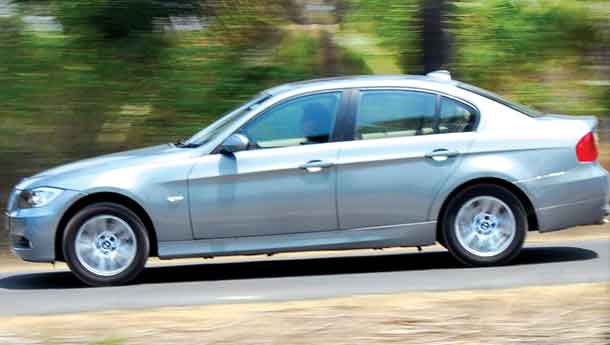 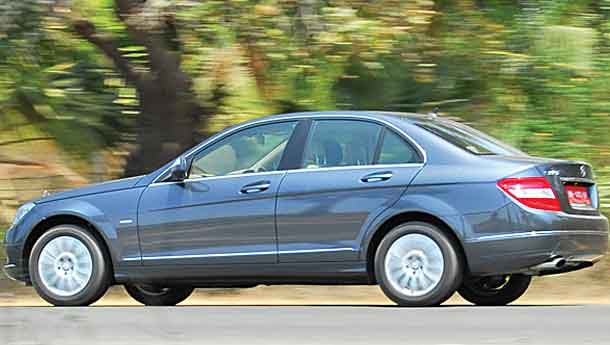 These days, when people ask me what I do for a living, I politely tell them that I compare BMWs and Mercedes-Benzes. Sounds cool, ensures that the questioner leaves with a depleted ego and grows additional chest hair for me. But I do have an issue with my team. Look at this issue – this is supposed to be the Summer of Speed special and Rohin got to drive the new GT-R and a souped-up Honda on Mumbai roads, Srini plunged into a Shelby GT500 and Maserati Indy and Shumi was doing burnouts with Gixxers. And I was left with yet another Merc vs BMW shootout. To make matters worse, my team ensured that the said Merc was not the AMG variety and the BMW in question didn’t have an M badge.

But as you would know, it is not an easy task comparing BMWs and Mercs, issue after issue. To begin with, you should have a degree of experience with cars of this calibre, you should be able to find faults with them and then, most importantly, you should have friends at both firms who would still give you a test car next time around, despite the verdict. And then there is the important, often overlooked, part of a few buyers out there twiddling with thirty-odd lakh, deciding which way to put their money. Don’t worry, dudes – whichever way you go, it will be a better decision than yet another two-bedroom flat in a distant suburb. So!

Actually, I am tempted to finish this report in this paragraph by saying, ‘Ahem, maybe we should wait for the brilliant new Audi A4 that is due any time now’. But then that would leave white space the size of the Arabian sea in this magazine. So read on.   As you know, the BMW 3 Series is already going through a mid-life crisis while the Mercedes-Benz C-Class is just getting out of its diapers. That means two things – Mercedes has had time to out-design the current 3 Series and BMW has had time to improve upon an already new car. Naturally, the C-Class behaves more like a BMW these days, with aggressive powertrains and sharper dynamics, while BMW just improved its already good diesel motor to get some more power out of it. And yes, the Highline variant ensures that it gets goodies like iDrive that puts it at par with the C220 CDI, which comes with the Comand module. We could have done a Performance Evaluation Track test and quickly come to a verdict – instead we chose to drive the cars extensively on our highways and B-roads to arrive at it. And it will be a Chernobyl-sized lie if I tell you that we didn’t have a blast.

Design
The newer car here is the C-Class and it ought to look better, right? Hmm… yes and no. I do like the new C-Class form, though I like it even more with the ‘smiling’ grille that comes with the Avant Garde trim. With the traditional grille, the car looks even more stately and makes it a better choice to ‘arrive’ in. It has got the bling-Q too, with chrome splashes and an overall ‘let-us-drive-to-the Candy Shop’ gait. Bring on some lower profile rubber that lower the machine and add spinners for that ‘specially pimped for you’ look. There are those who don’t approve of the shortened boot – but I think that makes the car look sportier. It was a pleasure to see the car liven up the rearview mirror of the BMW and even better to see it in profile and in motion. On the negative side, the shutlines are huge (making Lexus tolerances look closer to spacecraft than cars) and the bonnet looks popped-open all the time. I am tired of trying to attempt to click it shut every time.

The BMW, in comparison, looks ordinary when you first encounter it. This is not the car to stop people in their tracks. But live with it for a week or so and something extraordinary happens. Something which a married woman feels for her husband despite having to do his laundry, suffer his snoring and his snubs. Something that all married men feel for their wives despite their pre-programmed and absolutely genetic urge to continue with procreational stunts with every other woman in the universe. It is called love. Alright, make it LOVE. Seriously, you fall in love with the BMW in a very progressive manner and once that happens, it is difficult to divorce the thought. Then you like the sag-lines on its belly, you like the M3 that hides in its wheel arches and the overall effectiveness and potential energy that it imparts even when it is stationary. Yes, this is pure wife material and you can call it a flaw if you like, but I do like the idea of having a home to go back to everyday. So the story remains the same – Mercedes if you like words and Beemer if you like action. In a material world, both have their rewards.
320d :  ****
C220 CDI :  ****

Interior and comfort
You pay premium money to be pampered, right? While both the contenders here feature lots of leather and good trim, it is the BMW interior that makes you feel special thanks to sheer attention to detail. Again, it takes a while to appreciate this, since the Mercedes interior is not devoid of luxury. Plush leather, comfortable seats, more legroom at the rear and the new biscuit coloured surfaces in the test car will get your attention. Yet there are deficiencies – the Comand module is not as intuitive as the iDrive and something as simple as getting a CD out of the player needs the brain of a nerd with substance-abuse history. And then the seats do not have full-electric function and you need to resort to a mechanical lever to slide it to and fro while, BMW resorts to powerful motors for the same. Seats in both cars are comfortable for long stints behind the wheel, with Mercedes concentrating on the plush, while BMW seem to believe in firmness and support. Mercedes resorts to retro-dials to operate climate control while BMW goes for feather touch switches – I prefer the latter, though the former looks more cool. Both steering wheels have buttons to control everything short of a blabbering partner too. If rear seat comfort alone is the reason why you are in this market, then you can buy the Mercedes straight away. But if driving comfort and ergonomics that warrant a text-book of their own is what gives you the kicks, then it is the BMW you should be gunning for.
320d :****
C220 CDI :***   Power and performance
Trust me, this Mercedes-Benz feels more energetic at almost all speeds than its BMW rival. Mind you, the word I used is ‘energetic’. The four-cylinder motor mated to the six-speed auto’box has more torque under its sleeve (40.8 kgm vs 34.4 kgm) and that is translated to a degree of eagerness never before found in bread-and-butter diesel sedans wearing the three-pointed star. The third generation common-rail motor delivers its 170 bhp in a very linear way and that makes it the cruiser among the two. You can do a bit of point-and-squirt driving for a laugh, but its real strength is to waft along effortlessly for long hours.

The BMW engine has more character, though – it is whisper quiet in normal usage but starts emitting the sporty gnarl typical of petrol sipping BMWs as engine speeds climb. Once the turbocharger is up to its tricks, the BMW explodes into a performance zone which has no right to be classified under diesel cars. So what am I trying to say here – one is an energetic diesel and the other, a spontaneously energetic diesel? Yes, something like that. The road tests for these cars were conducted on two different days by two different drivers and I do agree that conditions and driving habits (and a bit of enthusiasm for certain brands) has coloured it somewhat. But still, a two-second deficit to 100 kph means the Mercedes is not as quick as it feels.

The additional ponies certainly help matters here and the new revamped diesel motor is similarly quicker than the 2007 model we tested not so long ago. The story continues in passing speeds and all the way to the 210-220 kph realm that these cars are capable of maintaining. Both cars offer sports mode for additional performance thanks to more eager gearing but again, it is in the BMW that it makes an appreciable difference.This BMW powerplant exceeds expectations while the Mercedes unit is pleasantly capable. The difference is simple – you really feel like driving the wheels off the BMW day in, day out while you will think twice before stretching the performance envelope of this baby Mercedes.
320d :*****
C220 CDI :****

Ride and handling
The biggest issue with the 3 Series when it was officially launched in India was the ride quality and we were quick to blame it on the run-flat tyres. Well, here we go, the Highline rides better and retains the run-flats! How? You have to thank new dampers and fresh spring ratings for that. The ride on good roads remain sublime while on patched-up surfaces, it has improved tremendously. The car does not crash into surface changes the way the older car did. That said, it still cannot rival the ride on offer from the Mercedes (which incidentally is not as good as that of the W203 model it replaces). The new
C-Class is bent on passing on some degree of information from under the contact patches all the time, but it ensures that such messages are sent through the seat of the pants rather than the vertebral column.

That means you do get alienated from the surroundings if you are not behind the wheel.Surefooted handling comes naturally to the BMW, while the Mercedes is not fond of being pushed around. But the penalty for the 3 Series driver is that he will have to live with a steering that’s easier than only a
coal-powered road-roller. If you are suffering from arthritis, then stay away from the BMW and buy the Mercedes, which has a feather-light steering which requires your little finger and nothing else to turn at any given speed. That said, the BMW steering, which is really, really hard at parking speeds, starts getting better weighted as speeds increase and transforms into a precision tool when you are into law-breaking mode. But did I tell you that the BMW steering is hard?
320d :****
C220 CDI :***

Verdict
If the verdict looks like the climax scene of a movie that ran out of budget, it’s because I am running out of space. So here goes. The new C-Class is easily the better buy overall if you are looking for status, faultless performance and diesel economy. It has got the ‘newness’ about it and you can be assured that your money won’t look dated for the next six years. The BMW is more fun to drive and hence the driver’s delight. The sun rises in the east, people are losing money in the markets and BMW beats Mercedes when it comes to sheer involvement, thanks to a brilliant chassis and an improved powerplant. And yes, we feel it is the BMW that is the better built of the two after some serious driving. That makes it our overall winner here. As for my job, it is getting increasingly tough comparing Mercs with Beemers.