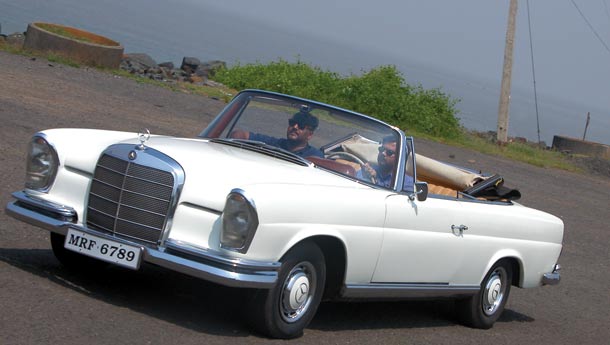 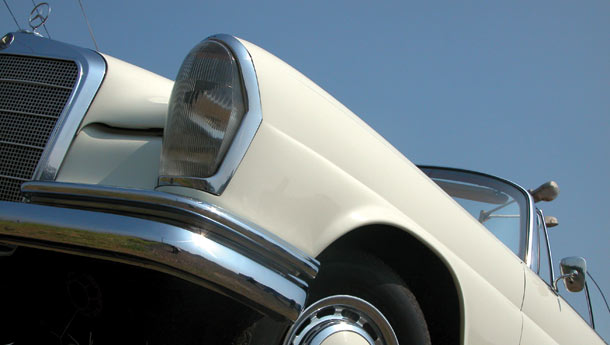 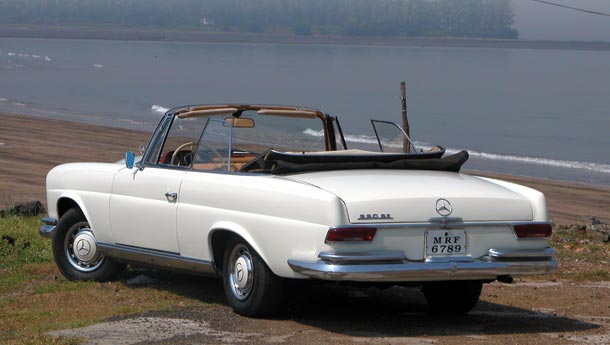 I’m quite content with what I have, but for those few hours, I really wished I was fabulously wealthy. I would have many mansions at various parts of the world, and plenty of Mercs too – the Maybach 62 as a mobile office, the SLR-McLaren for the pan-European dash, the 300 SL for Goodwood, the SSKL for the Mille Miglia and a G 55 AMG for the estate. Cool line-up, huh?

But when I go to my beach villa on the Costa del Sol, a special car will be waiting there for me. It will be a full four-seater to accommodate me and my three girlfriends, it will have a foldable top to invite the glorious sun to join us and it will be powered by a sublime six cylinder engine. It will be this, the 220 SEb cabriolet.

So why not the more modern, sophisticated new CLK cabriolet instead, you may ask. Well, the answer to that is it’s not exclusive enough, and more importantly, doesn’t even have half the style quotient of this 1965 220 SEb. I mean, just look at this car, don’t you think all this picture needs is a sweet blonde wearing a colourful scarf and sunglasses? It’s another thing that the closest I could get to a gorgeous blonde would be in distant Mumbai (with a considerable amount of persuasion of course), but heck, I had the sun, the sea and a villa too (not mine, though). We were in Mandwa, a three-hour drive from Mumbai, where industrialist and automobile connoisseur,  Vijay Mallya houses quite a few of his vintage and classic machines. Of all that fabulous metalwork, for me, this was the classiest of them all, and the most desirable too.

Well, the southern Spanish coast Mandwa isn’t, but when you are driving the 220 SEb, it really doesn’t matter – you’re the epitome of cool. Stretched out in front of you through the large wrap-around panoramic windshield is a long, curvaceous hood, capped by the majestic Mercedes grille and star, which in turn is flanked by tall headlamps integrated into Plexiglas lenses. Chrome abounds, but it’s all done so tastefully – it’s around the headlamps, on top of the window glass and the tail-lamps. However, the favourite part of my rear vision are those two subtle fins.   The fins – the most cool element of the car – were a mild concession to the automotive tastes from the mid-1950s onwards when Cadillac and Lincoln overwhelmed Europeans with their excessive fins. So Mercedes also had to bow down to popular opinion, and incorporate them, almost apologetically. And unlike the American car makers, Mercedes believed that form follows function, so these fins were made into a necessity – they were called ‘guide edges’ to aid you while reversing! Just as well, as this car is quite large – unlike the preceding cabriolet based on the 180 unibody ‘pontoon’ Mercs, the engineers at Stuttgart retained the same track and wheelbase of the 220 saloon to make the cabriolet a true four-seater.

You know what, even Mercedes does not make Mercedes cars like this any more. Take the dash of modern Mercs, for instance – they may have genuine wood, but this seems synthetic and plasticky. Whereas here, the dash, the instrument nacelle and even the insides of the A-pillars have as much wood as you would find in one full acre of the Black Forest. Everything seems so lovingly put together, the flattened-top horn ring, the bakelite steering wheel and knobs, the overall layout of the instruments, all evoke superb craftsmanship and an unhurried era. Oh by the way, the entire dash, the insides of the doors and even the visors are all padded – what’s the big deal? Wait, I’ll come to that. For the moment, it’s time to turn the key.The engine, which is mounted on a subframe, comes to life with a silent, dignified hiss – perfect, for a raspy, sporty exhaust would be the last thing I needed to hear in a car like this. Beneath that long hood is a straight six engine, displacing 2195 CC and developing 115 smooth horses, that get transferred to the rear wheels. This engine has something special going for it – fuel injection. While the 300 SL and the 300 S of the 1950s were the first in the world to feature fuel injection, it only got into mass production in 1958 beginning with this series of Mercs – that E in the SE stands for injection engine, by the way. However, since electronics were not that developed then, the injection was still mechanical. But for me, at that moment, it did not matter, because I was already shifting that delicious gear knob into third and cruising beautifully.

The performance of the inline six and the stylish body go along so well. Since the 220 SE tips the scales at 1,980 kg, there’s plenty of torque at the low end to simply get it moving. In fact, you could move from standstill while in the second gear itself, which means the third gear is tractable enough to gently crawl along the corniche to wave at the passing human scenery or to effortlessly climb the Grossglockner pass in the Alps. I guess this flexibility and acceleration is thanks to fuel injection, vis-à-vis carburettors. I stayed in third for a while, coming to grips with the sheer length and width of this boulevard cruiser around the narrow roads of Mandwa. This is bliss, the sun gleaming above, the tarmac snaking below and the engine whispering sweet nothings to me.   A clean stretch of road, and I shifted to fourth. Only to be immediately rewarded by a surge of speed... hmm, this car has some hidden talents. Considering that 115 bhp is barely adequate for propelling a car of this mass, I was taken by surprise by the reserve power the engine commands. While the speedo has been calibrated to 210 kph, I could safely take it beyond 160 kph without the engine feeling out of breath.

At decent cruising speeds, the 220 simply wafts along, and protects the passengers wonderfully from the irregularities of the road. The suspension set-up includes double transverse arms at the front, coil springs and an anti-roll bar, while at the rear it’s a single pivot swing axle with coil springs. It just soaks up all the bumps, the ride quality is phenomenal – exactly as I imagined it would be, even before driving the car. But take a corner a little more faster than the Merc expects, and it loses its composure – just that teeny-weeny bit, making those 13” Bridgestone radials squeal in protest.

Signs of danger? Not an issue, really. Because amongst all the classics I have driven in the past, this is one which is actually considerate enough to save human lives. When these tail-fin models (W111) were introduced in August 1959 – the 220, 220 S and 220 SE – they were the first series production cars in the world to boast integrated crumple zones and a strengthened passenger compartment. The reasoning was that of a Mercedes engineer called Bela Barenyi, who felt that car bodies should not be rigid and unyielding, but they should absorb the crash force – so his idea of a front and rear end that crumple on impact, and a protective passenger cell that does not deform. Though it was patented in 1951, it got into series production only in 1959 But that’s not all. W111 also features injury-minimising interiors. So none of the controls are sharp enough to hurt occupants – for instance, the door handles are recessed, the dash yields on impact and so does the rear view mirror. Additionally, as I mentioned before, all the interior surfaces are padded to protect passengers. Today, we take these features as granted, and expect all modern cars to have proven crash-worthiness – it’s all thanks to Barenyi’s genius, and Mercedes’ consistent attempt to make automobiles more and more safe. The 220 series also went through a systematic crash testing programme, including a roll-over simulated by a corkscrew ramp.

Oh one more thing. The 220 SE was also the first production Mercedes to feature disc brakes on the front. Impressive. I just realised that for all its glamour and elegance, the 220 SE Cabriolet just proved that health is wealth. So much for my fantasies of being stinking rich.